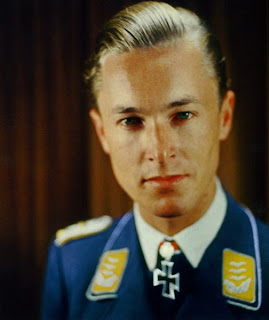 Heinrich Prinz zu Sayn-Wittgenstein was a Danish-born German prince who became a legendary flying ace in the Nazi German Luftwaffe of World War II. However, he was far from being an enthusiastic supporter of the regime. He was born Heinrich Alexander Ludwig Peter Prinz zu Sayn-Wittgenstein on August 14, 1916 in Copenhagen, Denmark where his father was working as a diplomat during the First World War. Sayn-Wittgenstein was a mediatised house that dated back to a county in the Holy Roman Empire in what is now North Rhine-Westphalia. The second of three sons he was also descended from the Russian Field Marshal Peter Wittgenstein who gained fame in the Napoleonic Wars. Suffice it to say he came from a very long military tradition and, politics aside, fighting for his country was something that came naturally to the young aristocrat. Educated in Switzerland and Germany he joined the Hitler Youth in 1932 and was recognized even then for his leadership qualities but his activities in the Hitler Youth were entirely focused on his great love of sports. In 1937 he joined the German army, first with a cavalry regiment but later in that year transferred to the air force.

He first saw action in World War II as an observer and navigator with the bombers fighting in the invasion of France and the battle of Britain. The following winter he went through special training for night flying, something he was to excel in. When Hitler invaded the Soviet Union he was stationed in East Prussia and was involved in the destruction of the Russian airfields in the Baltic states. By the summer of 1941 he was already a highly decorated veteran of 150 combat missions. In January of 1942 he transferred to the night flying wing and was promoted to squadron commander, winning his first victories over the Netherlands. Some of his comrades said that Wittgenstein was too strict, vainglorious and lacked the qualities of a teacher and mentor that were required of a good officer. However, none could deny his talent and his score of victories quickly soared. In October of 1942 he was awarded the Knight’s Iron Cross. Moving back to the Russian front in 1943 his successes became even more numerous. Later in the year though he was transferred west again to provide cover for Allied air assaults on the German submarine bases on the French coast.

His victories and reputation continued to rise and he and his squadron were moved back to the east where he was further decorated by Adolf Hitler himself. However, the prince was not exactly flattered by this attention from the Nazi dictator. In fact, he confided to his mother that his disgust with the Nazi government had grown so great that he contemplated assassinating Hitler when presented with his award. He reasoned that he had no wife or children to leave behind and would have the perfect opportunity. However, his sense of duty to his country prevailed and he did not follow through on his threat. Not long after, on January 21, 1944 he was shot down near Berlin by British fighter escorts, going down with his plane after having his crew parachute to safety.

More decorations were posthumously added to the long list of honors Prinz zu Sayn-Wittgenstein received during his career. At the time of his death he was the most successful night fighter pilot in the entire German air force and even by the end of the war only two other pilots had managed to surpass him. In all he shot down over 80 Allied aircraft and won most of the awards the Luftwaffe had to offer. Unlike many of the most successful German pilots he won more engagements on the western rather than the eastern front. Initially buried in Germany he was later moved and reburied in the Netherlands.
Posted by MadMonarchist at 12:38 AM