Mad Rant: The Nature of the Leftist Beast 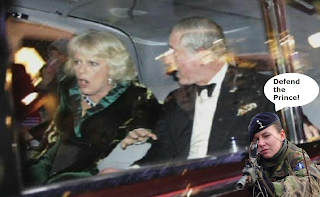 In what has been described as the worst riots London has seen since 1990 the Prince of Wales himself has come under attack by the mob of empty-headed sheep and professional agitators when the car His Royal Highness and the Duchess of Cornwall were riding in was viciously assaulted on Regent street while the royal couple were on their way to the theatre. Eggs and paint were thrown, side panels were kicked and a window nearly broken during the tumult which has been going on for two days outside Westminster palace. The cause, as most know, is a bill raising the cost of college tuition as part of the efforts of the Tory-LebDem coalition government to cut government spending in order to fend off financial disaster in the UK. Thankfully the Prince of Wales and the Duchess of Cornwall were unharmed but it was a very nasty experience and a shameful display all around.

Everyone has heard the wise saying that you do not get between a momma and her cubs. It is also very dangerous to get between a bunch of snotty-nosed brats and their tax payer-funded handouts. Cut through all the crap, political spin and assorted BS and what this comes down to is a bunch of spoiled brats upset at the prospect of actually having to pay for services rendered to them. Of course, their liberal elite college professors are only too willing to encourage them because higher education is one of the biggest scams of modern times and they would much prefer the spoiled brat anger be turned against the government instead of the universities themselves for demanding such exorbitant fees for their services. Everything from tuition to books to living space connected with higher education is grossly overpriced. But, as with society at large, when it comes time to cut back because of overspending the old saying remains true, “Don’t tax you and don’t tax me just tax the fellow behind the tree”. Do not demand cost cutting by the universities but rather howl at the government and destroy some private property of innocent bystanders in the process in order to vent your rage at being expected to actually pay your own way.

That is said, of course, not to give cover to the government which has, to a considerable extent, brought this crisis upon itself by getting the spoiled brat brigade addicted to the lie of “free” education as an entitlement in the first place. It is only unfortunate that the Prince of Wales and Duchess of Cornwall were caught in the crossfire. However, this illustrates very well exactly why revolutionary liberalism and the very concept of monarchy can never be reconciled, despite what some may try to pretend (and some royals among them). The clash between republicanism and monarchy is the ultimate expression of the class warfare seen in vivid color on the streets of London, it is the heart of the whole entitlement problem; one group of people demanding the property of others with no other justification than that the first group has it and the second group does not. These greasy, acne-covered bratlings demand that others pay for their education; in essence they are demanding that money earned by someone else be taken from those people and given to them in order for them to advance themselves.

It is fitting that it is a Prince of Wales named “Charles” who was caught in the middle of this because it was the martyred British monarch King Charles I who summed up his own fight with the “Roundheads”, the Royalists versus the Parliamentarians, as a struggle on his part, on behalf of all of his people, to safeguard the right of everyone to that which is legitimately their own. Trampling on the legal right of everyone to that which they justly earned or inherited, governments used their power to confiscate the property of one section of society to redistribute to another section because it was in their own selfish interest to do so. Now that the gravy train of the money of others is in danger of being cut off the cry baby cohort is trying to use their own power (street violence) to force the state to continue giving them the property of other people. It is just what King Charles I, at his “trial” warned of when he said, “For if power without law, may make laws, may alter the fundamental laws of the Kingdom, I do not know what subject he is in England that can be sure of his life, or any thing that he calls his own.”

Mobs of shiftless malcontents demanding property or privileges from others simply because those people have them and they do not is at the heart of every revolutionary republican movement that is or ever was. It was why King Charles I was the real champion of freedom in the English Civil War rather than Parliament and it is why the overthrow and death of King Louis XVI brought tyranny to France rather than eradicating it. It is why monarchies that are overthrown or those which have royal powers diminished to mere ceremonial status have, invariably, without fail, turn into big-government totalitarian states in which every aspect of our lives are regulated by the state and in which political elites decide everything for us from what we eat and drink to what we drive, how we work and how much money we are allowed to have. We have seen this all before! We saw it at the Bastille in France, we saw it in 1848, we saw it in St Petersburg in 1917. There are only two sides in this struggle and it infuriates me that so many simply refuse to wake up to that simple fact and to what larger movement is represented here. Of course, were it otherwise, I would not be … The Mad Monarchist.
Posted by MadMonarchist at 12:16 AM