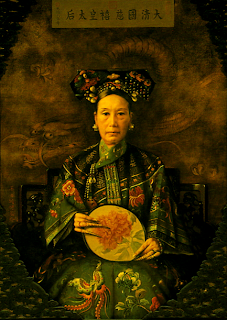 The story of the Grand Empress Dowager Cixi is one of the most remarkable in Chinese history. She rose from being a rather minor consort in the Forbidden City to become the dominant figure in Chinese government in the twilight of the Qing Empire and effectively the ruler of China in all but name. She was born on November 29, 1835 to a relatively minor Manchu official. Not much about her background is known and there are conflicting accounts as to her date of birth and even her given name. In 1851, after moving to Peking, she was chosen as a concubine for the Emperor Xianfeng, eighth emperor of the Qing Dynasty. The Emperor favored her and she was advanced in rank amongst the concubines and by 1855 she was pregnant. When she gave birth the following year to the future Emperor Tongzhi her position was assured to be a secure and influential one. This advanced her in rank above all the other concubines and second only to the Empress herself.

In 1860, during the second Opium War, British troops attacked Peking, burned the Summer Palace and forced the Imperial Family to flee to Manchuria. In the ensuing years this act would have a great effect on Cixi and instill in her a fear and loathing of foreigners and the British often in particular. The Emperor died shortly thereafter in Manchuria and Cixi’s son, Tongzhi, became Emperor of China. It was hoped that the Dowager Empress Ci’an and Consort Cixi would cooperate in overseeing the young monarch who would be acted for by a committee of eight regents. It was also at this point that Cixi was elevated to the rank of Empress Dowager. However, the Dowager Empress Ci’an was easily dominated and by 1861 Empress Dowager Cixi had consolidated enough support around her from those opposed to the regents to carry out a palace coup that effectively made her the ruler of China. She rewarded her supporters with high positions and was the dominant force in politics throughout the reign of Emperor Tongzhi.

Contrary to what some think the era of rule by Empress Dowager Cixi was not one of complete stagnation. She reformed the bureaucracy, personally interviewing candidates for high office, opening up offices to Han officials as well as Manchus and even placing Han Chinese officers in charge of military units if they showed more promise than the traditional Manchurian choices. Part of this was in response to the great danger represented by the Taiping Rebellion which threatened the Qing Dynasty with total destruction. Cixi was greatly disturbed to have to allow foreign elements in to quell the rebellion and she was determined to reform and modernize Chinese civil and military institutions so that such assistance would not be needed again. She allowed foreigners to teach Chinese students in Peking and also agreed, for a time at least, to allow Chinese students to go abroad for education. This only changed when these students returned home with new philosophical ideas as well as practical ones that posed a threat to the traditional political framework of China and their Confucian cultural heritage.

It is also true though that Empress Dowager Cixi jealously guarded the power she had attained. She prevented Emperor Tongzhi from taking power into his own hands and when he died without an heir in 1875 she chose as his successor her nephew the Emperor GuangXu who she continued to dominate. There were also increasing challenges for the Qing dynasty and a string of domestic and foreign defeats. The Taiping Rebellion was defeated but at great cost and with foreign assistance. China was defeated by the emerging power of Japan in the first Sino-Japanese War which pushed Chinese influence out of Korea and a war with France over influence in Vietnam also ended in defeat for China. This string of defeats helped encouraged many of the traditional Manchu elites that drastic changes were needed and they rallied around the figure of the young Emperor GuangXu to assert his authority and take power from the Empress Dowager.
This resulted in what is known as the “100 Days of Reform” led by modern-minded mandarins such as the staunch Qing loyalist Kang Youwei and the more liberal Liang Qiqao. The Empress Dowager went into retirement as the Emperor issued a string of reform edicts aimed at modernization and a transition to a Chinese-style constitutional monarchy. However, all of these sudden changes generated a great deal of opposition. It is usual to portray the opposition of the Empress Dowager and those supporting her to these reforms as simple reactionary intransigence and desperation to hold on to power. There were certainly elements of that but there was more to it such a genuine concern that such changes were too far-reaching, coming too fast and that foreign influences were gaining too much power through them; particularly the influence of the Japanese. Empress Dowager Cixi came out of retirement, orchestrated a coup against the Emperor and effectively placed the monarch under house arrest and resumed her own rule of China.

Shortly thereafter another potential crisis emerged with the outbreak of the Boxer Rebellion in 1900. The Society of Righteous and Harmonious Fists, which the foreign press termed the Boxers, were a nationalistic group aroused to wrath against the presence and influence of foreigners in China. However, this opposition to “foreigners” extended to varying degrees to the Manchu dynasty who many Han Chinese viewed as foreign even though they had long been thoroughly acculturated. Because of this the Manchu court was divided over how to deal with the Boxers between those who saw the movement as a great opportunity to seize on their popular momentum to drive out the foreign influence and those who saw the Boxers as a threat to the dynasty, either on their own or by inciting the foreign powers to retaliate against the whole of the Chinese empire. Empress Dowager Cixi finally decided to cast her lot with the Boxers and give them the support of the imperial army, reasoning that, in their current state, China had nothing more to lose. Unequal treaties had been enforced on China, foreign possessions dotted the coast and most of China was divided amongst foreign spheres of influence. If the Qing court allied with the Boxers and they were victorious it could have been a new lease on life.

However, as we know, the Boxers were not successful. Despite some early victories the foreign legation in Peking held out in a dramatic 55-day siege against the Boxers and a coalition army eventually succeeded in marching to their relief. The Boxers were destroyed, the Empress Dowager and the whole imperial court were again forced to flee Peking which was sacked and looted by the foreign armies, enraged over the treatment of their officials and countrymen as well as the massacre of missionaries and Chinese Christians by the Boxers. A humiliating peace treaty was forced on the Empress Dowager which ended up being self-defeating for the foreign powers. The Qing dynasty might have collapsed then and there but the eight-nation alliance preferred that the empire continue rather than dissolve into chaos. However, by imposing such humiliating terms on them they all but ensured the eventual collapse of the Qing Empire which did occur less than ten years later.

The Empress Dowager did not return to Peking until 1902 but then embarked on a new push for reform and modernization, again, something she seldom is given credit for. Foreign models were studied, numerous changes enacted in everything from court protocol to civil administration and society as well as the military. However, most viewed these reforms as ‘too little, too late’. Things were also made uneasy by the fact that the Empress Dowager was clearly in failing health and would not live much longer. In 1908 she designated another nephew, Aisin-Gioro Pu-Yi, to be the heir to Emperor GuangXu who was soon to die. It is widely believed that the Empress Dowager had him poisoned to prevent him implementing the reforms he had previously attempted. However, regardless of how he died, this would seem an odd motive for assassination considering that the reforms the Empress Dowager herself implemented were more far-reaching than those of Emperor GuangXu she had previously opposed. In any event, the Emperor died, the next emperor was named and the Empress Dowager passed away herself on November 15, 1908 after a long and legendary career almost unique in the entire history of Imperial China.

The lady who had entered the Forbidden City as a lowly concubine ended her life as ‘Her Imperial Majesty the Current Divine Mother Empress Dowager of the Great Qing Empire’ with additional titles and nicknames such as “The Old Buddha”, “The Blessed”, “Holy Mother”, “The Respectful”, “The Eternal” and so on; a testament to her power, prestige and her image as a permanent fixture in the halls of power. That this was remarkable and unprecedented was not lost on the Dowager Empress herself who famously remarked, “I have often thought that i am the most clever woman that ever lived, and others cannot compare with me.... Although I have heard much about Queen Victoria...I don't think her life was half so interesting and eventful as mine.... she had... really nothing to say about the policy of the country. Now look at me. I have 4000,000,000 people dependent on my judgment.” How correct her judgments were remain much debated. Traditionally she has been seen as a villainous figure, thwarting efforts at reform and cheering Boxer atrocities. However, as we have seen, that is not a totally accurate view. Recent historians have started to paint a more favorable picture of her but they have a long way to go in changing the popular perception.
Posted by MadMonarchist at 12:16 AM