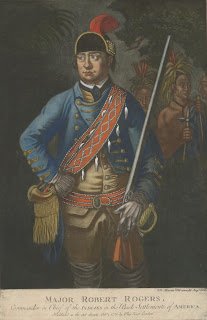 Outside of those familiar with American military history the name of Robert Rogers might not be very well known. He was born on November 7, 1731 in a little town in the colony of Massachusetts. His father, an Irish immigrant, later moved them to New Hampshire and founded a town which is today called Dunbarton. In 1746-7 the young Robert Rogers saw service in King George’s War as a private in the New Hampshire colonial militia, getting his first taste of military service. After this was over and he grew older he was a rather troubled young man, known for his short temper, and had some run-ins with the law but nothing ever came of it.

However, conflict was again to rescue the rebellious Robert Rogers and provide him with respectable employment in 1755 with the outbreak of the French and Indian War. Despite being vastly outmatched the French fought with skill and tenacity and won a number of early victories. This, combined with the alarming growth of British colonists in North America, prompted many native Indians to cast their lot with the French and begin raiding British settlements. That winter, while at Fort William Henry in New York, Robert Rogers formed the military unit that was to make him famous; Roger’s Rangers. Rogers built this small band into an elite irregular warfare unit that would use Indian tactics against the Indians themselves and their French allies in numerous raids and reconnaissance missions.

Wearing practical green uniforms to blend more easily with the forest, Rogers taught his men the fundamentals partisan warfare; how to look after each other, move quickly, lightly and quietly, ever alert, to fight from cover and make every shot count, to see without being seen and sweep through an area without leaving a trace behind. He was hard on his troops but a father figure as well, taking it upon himself to recruit them, equip them and pay them, which put him severely into debt. His service proved so valuable that in 1758 General James Abercromby promoted him to major. The following year Major General Jeffrey Amherst, overall British commander, sent Rogers on an incredible raid deep behind enemy lines. Rogers, with 200 of his rangers, slipped through the French lines, evaded detection and destroyed the town of Saint-Francis in Quebec; a major psychological blow to the French and Indians. After the fall of Quebec and Montreal Rogers and his men were sent west where they seized Detroit, Michigan. The French throughout the Great Lakes area surrendered and the Rangers, their work done, were disbanded.

This adventure in the northwest was taken in reaction to the uprising of a pro-French Indian alliance against the British led by the Ottawa chief Pontiac, about whom Rogers would later write a dramatic play which paid no small part in the rise to historical fame of the brave Ottawa chief. The ensuing period of peace was ruinous for Rogers who ended up in prison for debt but the adventurous man escaped, left his American homeland for England and it was there that he tried his hand at being an author. However, he was soon called back and his return coincided with the outbreak of the Revolutionary War. Some of his own men were among those militia who stood against the British in the opening skirmishes. Being a native of the colonies and not untouched by the complaints of the rebels Rogers first offered his services to General George Washington of the Continental Army. However, due to his recent stay in England, Washington took Rogers for a spy and refused him a commission. Deeply offended, Rogers washed his hands of the revolutionary movement and offered his sword to King George III and that time was gratefully accepted.

In 1776 the newly appointed Colonel Robert Rogers organized and led the elite Queen’s Rangers in New York. It was Rogers who was responsible for the capture of the famous American spy Nathan Hale. The Continental Congress declared him a traitor (always a rather hypocritical thing for revolutionaries to do) and also declared him divorced from his wife. She later married a proper rebel as Rogers was, by that time, mad, bad and dangerous to know. Rogers was retired for a time and suffering from terrible depression from all he had endured which led him to become an alcoholic. Yet, in 1779 he raised another elite fighting unit in Nova Scotia for Sir Henry Clinton; the King’s Rangers. However, his alcoholism had grown so bad that he was incapacitated and had to pass command to his brother. Captured by the Continental Navy, despite his many misfortunes he proved as difficult a prey as ever to hold and he escaped in 1782. Following the British surrender he accompanied the Crown forces back to England where he died in debt and obscurity.

However, Rogers did not remain obscure after his death in 1795. The Queen’s York Rangers of the modern Canadian army descends from the unit Rogers formed and led. There is also an artillery battalion of the Michigan National Guard that included some of Rogers’ actual descendants. Finally, during World War II, American troops greatly impressed by the skill and style of British commandos formed their own elite special forces and called themselves the U.S. Army Rangers after taking Rogers as their ancestor and inspiration. Thus, Robert Rogers, a soldier of the Crown and active loyalist became the forefather of all the modern American special forces. His famous ‘28 Rules of Ranging’ he drew up for his original unit are still read and well learned (with a few modifications) by U.S. Army Rangers to this day.
Posted by MadMonarchist at 12:55 AM