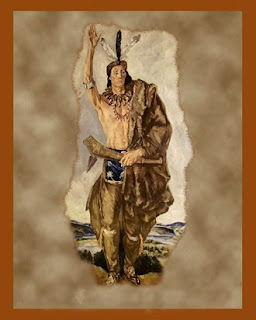 Of the great American Indian chieftains of the colonial period, one of the names that is most familiar is that of the Ottawa war Chief Pontiac. For a time, he was the biggest problem the British Empire in North America faced and even offered the glimmer of a chance that His Most Christian Majesty the King of France might be able to overturn the results of the French & Indian War. Like most of his time, place and background, there are few hard facts about the exact origins of Chief Pontiac. The date of his birth has been estimated at 1712 to 1725. No one is sure exactly where he was born or precisely to whom. It was originally said that his father was an Ottawa and his mother an Ojibwa but others stated one of his parents, perhaps his mother, was of the Miami tribe while still others, more recently, assert that he was a Métis of French and native parentage. In any event, he himself and all those around at the time identified him as an Ottawa.

By 1747 Pontiac was a war chief and fought for the Kingdom of France against the uprising of Nicholas Orontony of the Huron. Later, he again fought on the side of His Most Christian Majesty in the French & Indian War against the British. Some accounts say he was present at the famous victory over the expedition of General Edward Braddock whose British column was decimated by a French & Indian attack. We will probably never know for sure but it is tempting to imagine a Pontiac perhaps taking a shot at a young militia officer named George Washington. It was also during this conflict that Chief Pontiac first crossed paths with Major Robert Rogers, a longtime enemy of his, but also a man who would in part be responsible for much of the fame of Chief Pontiac who wrote a play about him called “Ponteach: or the Savages of America”. It should be said though that, today, not all historians consider Rogers and Pontiac to have been so well acquainted as Rogers claimed.

In any event, the end of the French & Indian War was a pivotal moment for the native inhabitants of North America. New France was surrendered to the British and no one suffered more because of this than the Indians who had been allied with the French. The fears of British encroachment and colonization that led them to align with France in the first place were confirmed and even worse was to come. Trade all but stopped, tributary gifts were not exchanged, land was taken and people were killed as the British became the dominant power on the continent. It did not take long for Chief Pontiac and many others to wish longingly for the return of the forces of King Louis. The Indians had come to depend on muskets and gunpowder for hunting, long provided by the French in exchange for other goods. The British, however, refused to give the Indians weapons or ammunition in exchange for anything. Additionally, whereas few French colonists ventured onto Indian lands but instead tended to send out mostly fur trappers, traders and missionary priests, the British were serious about colonizing North America and soon large numbers of British settlers were encroaching on Indian lands.

Chief Pontiac had enough of this and began to rally his people and as many tribes of the Great Lakes region as he could into an alliance to rise up against the British. He and his fellows, war chiefs and shamans, called on the Indians to reject the alcohol the British traded to them (“poison” Pontiac called it) which stupefied them, to return to the traditional values of their people and to rally together in common cause to defeat the British. Chief Pontiac warned his enemies, saying in so many words that the French might have surrendered but he and his people certainly had not! He also hoped (unrealistically under the circumstances) that if he and his warriors could gain sufficient success the French would return and give them assistance. After a grand council Chief Pontiac and his men besieged Fort Detroit in May of 1763. His words inspired the men of many other surrounding tribes and soon the entire western frontier of British North America was ablaze as Indian warriors attacked forts throughout the Ohio country (as it was then called). French settlements were spared and this, combined with how sudden and widespread the attacks were, convinced the British that they were the victims of a vast Franco-Indian conspiracy masterminded by Chief Pontiac.

The truth, of course, was that Chief Pontiac had no authority over any people other than his own and could only persuade others to join him and those who did so acted, not as part of a secret conspiracy, but simply in their own best interests as any people are bound to. However, despite some successes, the Indians lacked the materials for a protracted campaign and effective siege warfare. Soon British retaliation brought ruin to the native population of the region. Chief Pontiac remained stalemated at Detroit, despite winning a stunning victory over a British column at the battle of Bloody Run. Groups began to abandon Pontiac and his cause and by October the proud chief was forced to admit to himself that the French were not coming to his aid (they hardly could have) and he abandoned the siege of Detroit and withdrew to the Illinois country try to continue rallying native support for an alliance against the British. It was not until 1766 that Chief Pontiac met with British Indian agent Sir William Johnson to end hostilities. In 1769 he was murdered at Cahokia, Illinois but his name and what he had tried to accomplish would live on for generations.

Ultimately, Chief Pontiac had failed in his aims and indeed the odds were always vastly stacked against him. However, his war ended up having some very far-reaching consequences. The British, showing their genius for learning from their mistakes, were never again quite so harsh toward the Indians as they had been. They recognized that such wars could endanger British rule in North America and for that reason they did everything in their power to prevent future conflicts and to try to encourage the Indians to see them as friendly allies as they had been previously with the French. Because of Chief Pontiac and the struggle he launched, His Britannic Majesty King George III ultimately declared all lands west of the Appalachians to be the domain of the American Indians and forbid any further encroachment of the region by British colonists. In a short time this act would become one of the primary causes for the American Revolution.
Posted by MadMonarchist at 12:36 AM