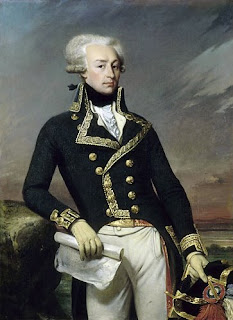 Gilbert du Motier, Marquis de Lafayette is probably still the most famous Frenchman to have a place in American history. It was on this day in 1777 that he arrived in South Carolina to join the revolutionary cause. The teenage marquis was quickly given the rank of major general in the Continental Army and made an aide-de-camp to General George Washington. At the outset he had more libertarian zeal than practical military ability but he was not lacking courage and over time distinguished himself on a number of battlefields and was wounded in his very first real fight at the battle of Brandywine. Washington was extremely fond of Lafayette and the two were described as being as close as father and son. During the war Lafayette returned to France for a time to lobby the government of King Louis XVI to aid the colonial cause. Unfortunately for the ancien regime such support finally came.

His service in America made Lafayette an icon of the revolutionary crowd and he was a liberal to his very core. However, he was not a radical or even much of a revolutionary when it came to his own country and the prospect of spilling French blood. Once back in France, following the eruption of the revolution his popularity was not to last long. The treasonous clique that took power made him commander of the National Guard but his star declined from there as the radical Jacobins accused him of being a royalist. Truth be told, Lafayette was not a sincere royalist in the depths of his soul; his only cause was a vague, utopian "liberty" but he did remain, throughout his time in France, firmly in the camp of those who favored a constitutional monarchy rather than a revolutionary republic.

Lafayette was also, unlike many of his compatriots in the American Revolution, a fervent abolitionist who opposed slavery in any and all cases from start to finish. He favored many of the principles of the republican crowd but he never supported violent methods to champion them nor did he see the monarchy as inherently evil as most republicans did. During the initial war against Austria he got into trouble by writing to his enemies about the possibility of making peace and restoring order in France under the constitutional monarchy. However, the Queen did not support the plan and when the radicals got wind of it Lafayette was swiftly declared a traitor for his orders to the National Guard to defend the constitution and the monarchy. He tried to escape to America via Holland but was captured by the Austrians.

It was only after Napoleon seized power that Lafayette was able to return to France but he remained firmly out of politics refusing to support Napoleon or to actively oppose him. He toured America again where he was still greatly celebrated and he returned to France prior to the July Revolution at which time he was offered the post of dictator but declined the offer in favor of making Louis-Phillipe "King of the French". He was made National Guard commander again until his calls for the abolition of slavery got him in trouble again. Nonetheless, when he died the King of the French buried him with full military honors to be outdone only by the mourning ordered by the Congress of the United States. Had I been in France at the time of Lafayette, his position would have been too lukewarm for me. However, he should not be categorized with the worst elements of the revolution and perhaps his ways would be more acceptable to French monarchists today as a more "realistic" strategy for restoration. Monarchists in any and all cases should focus on the ultimate goal and not allow differences of strategy to divide us.
Posted by MadMonarchist at 11:10 AM