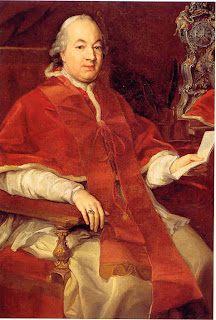 It seems that Pius VI will not go down in history as a great pope, due to both certain actions and inactions, however, he was a man who did his duty and was much more aware of the consequences of events around him than many people recognize or give him credit for. While it is true that the Church and papal influence reached one of its lowest points during his reign, it is also true that he had a series of problems to deal with which few other world or Church leaders could possibly do much better with. He is also remembered for having the longest reign of any pope after St Peter himself up to that time at 24 years, 6 months and 12 days.

The future pontiff was born Giovanni Angelo Braschi on December 25, 1717. He became a priest and cardinal before being elected to the chair of Peter on February 15, 1775. At the outset of his pontificate the major issue the Holy See had to deal with was the Holy Roman Emperor Joseph II. This was certainly not an easy issue as Joseph II was a member of the new breed of so-called "Enlightened Despots", of which, in fact, the Emperor was the only one who was truly humane and benevolent, yet ironically the only one denied the title of "the Great". In person he was a very devout and virtuous man, yet he came to champion a new idea which came to be known as "Josephism". This idea argued, among other things, that the Church was not a monarchy, that the Papacy had taken powers not granted to them by Christ and that the Bishop of Rome had no more authority than any other bishop.

This mentality set a dangerous precedent, particularly by coming from the Holy Roman Emperor, of Catholic governments ruling over Catholic populations to try to take power away from the Pope and give the last word to the government. Pius VI was able to deal fairly well with this issue, but no sooner than the clouds began to clear the French Revolution erupted, opening a murderous wound in the Eldest Daughter of the Church. Trying, like many pontiffs before and since, to be moderate and reasonable, Pius VI did not take strong action when the French state first began to turn the clergy into government employees. However, when things got worse, when the oath of loyalty was drawn up and the King and Queen murdered, Pope Pius VI took strong action.

The Pope condemned the actions of the revolutionary government and denounced the regicide of the "most Christian King Louis XVI" as the result of an "impious conspiracy" against the legitimate French authority. By now however, France had been thrown into such a frenzy of murder and violence, no words from the Pope were enough to stop it. The situation grew worse in 1796 when Napoleon Bonaparte invaded Italy with the intention of creating a new Roman Republic. The Papal military could do little to resist and Pius VI was forced to make humiliating concessions to Napoleon in return for peace. Naturally, Napoleon soon broke his word and invaded the Papal States anyway. Pope Pius VI was deposed with the establishment of the republic and forced to go into exile in Florence.

Pius VI continued to oppose the revolution and refused to bend to the will of France. He was taken by force from place to place as Napoleon had enough respect for the prestige of the Pope to realize what a dangerous symbol of resistance he could be. The Pope finally died, a prisoner in Valence, on August 29, 1799 much to the rejoicing of the revolutionary radicals. Many ignorantly crowed that the end of the Catholic Church was at hand, one Paris newspaper even saying that "The death of Pius VI has, as it were, placed a seal on the glory of philosophy in modern times". The trials of the Church were certainly not over, but of course the Church and her rock, the Papacy, survived long after Napoleon and the first French Republic were dead and buried.
Posted by MadMonarchist at 12:34 AM