The Betrayal and Death of Romania

No country on earth has fond memories of World War II. For those on the Axis side it is a memory of defeat coupled with shame and even on the Allied side there was horrible loss that tainted the victory as well as utter perplexity at how such an event could have been allowed to happen. Yet, for some countries the period is more painful still. The nations of Eastern Europe knew the pain of both sides, some Axis, some Allied and some both and yet there was still more. These countries knew hardship before the war, suffered conquest and occupation during it only to have their hopes crushed at the time of liberation when their countries were occupied again by those claiming to free them. For decades after the war was over these nations suffered incomprehensible suffering under the oppressive boot of Soviet dominated communist dictatorships. The crimes of these bloodthirsty regimes, truthfully told, make the atrocities of Nazi Germany pale in comparison. The numbers of those massacred outright or doomed to suffer a slow death in prison and forced labor camps is so great the human mind tends to reject it. The way modern society shuns the memory bears out the truth of what the dictator Joseph Stalin once said, that a single death is a tragedy while a million deaths is simply a statistic. It was a horrible period and one which the world should be forced to confront; and one nation which illustrates it clearly is the Kingdom of Romania.


The Kingdom of Romania was a rather young country restored to an ancient people. The Romanians declared independence from the Turkish Ottoman Empire in 1877 under the leadership of Prince Carol, a German royal from the Catholic branch of the Prussian Royal Family, the house of Hohenzollern-Sigmaringen. As King Carol I he not only secured the independence of Romania in a difficult and hotly contested region but also made the country admired and respected internationally when so many in the rest of the world tended to look down on the Balkan nations as somehow less civilized than Western Europe. The country soon went through a brutal trial by fire in World War I. King Carol I had never forgotten his roots and his relatives who were, by then, the Imperial Family of the united Germany, though certainly no one could question his loyalty to his adopted country, but his successor, King Ferdinand I, was entirely Romanian. Although he remained Catholic his children were raised in the dominant Romanian Orthodox faith and when the Allies promised Romania the region of Transylvania from the Kingdom of Hungary, he led his nation into war. It was a brutal experience for the young country.

The German Kaiser, Wilhelm II, was outraged that a king of his own family would take sides against him and took a particular interest in purging Ferdinand from the family records. The Romanian offensive into Transylvania ended in failure and Romania itself was invaded and all but overrun by German, Austrian and Bulgarian forces. The Romanians held on, thanks in no small part to the contribution of the British Queen consort of Romania, Marie of Edinburgh, but the defeat of Russia sealed her fate and Romania was forced to sue for peace. When presented with the peace terms of the Central Powers, King Ferdinand refused to sign them and when the war ended in victory for the Allies, Romania was restored and significantly enlarged. In addition to Transylvania, Bessarabia and Bukovina were added to the kingdom forming an imposing landmass locals proudly termed Greater Romania. The country had seen disaster and defeat but had emerged from the conflict with heads held high, fighting off Russian and Hungarian communists in aftershocks of the Great War. However, Romania did not remain unaffected by the political turmoil that shook most of Europe in the period between the first and second world wars.


Romania was forced to deal with the rise of extremist politics which followed World War I and the economic disasters which broke out around the world and caused many to believe that all the liberal democracy the Allies had preached was not all it had cracked up to be. As an additional challenge though, Romania was hard pressed for leadership as scandal shook the royal family. The heir to the throne, Prince Carol, was earning an unsavory reputation across Europe by his numerous affairs and playboy lifestyle. Confidence in him descended to such a level that when King Ferdinand began to deteriorate rapidly a council of regency made the infant Prince Michael, rather than his father Prince Carol, regent of Romania. Prince Michael, born in 1921 and named after the fighting archangel and Prince Michael the Brave, was to be the guiding force in Romania during his young adulthood in the greatest trials his country was to face.


On July 20, 1927 King Ferdinand died and young Michael became King of Romania under the guidance of a Council of Regency which exercised power on his behalf. King Mihai I of Romania, a son of the House of Hohenzollern-Sigmaringen (Catholic branch of the German Imperial Family) has been called by some, "the best head-of-state the country never had". In looking back on his early life, King Mihai seems to have fallen prey to the Chinese curse 'may you live in interesting times'. Those close to the king uniformly say he has consistently held the best interests of his people close to his heart since even his earliest years. For this, his people adored him, as well as for his almost legendary honesty and personal integrity.


The King was born on November 25, 1921 and named Mihai (Michael) after the saintly archangel and in honor of Prince Michael the Brave. His father caused a great deal of problems for his family, and even as a man in reflection, King Mihai has never been able to explain his father's behavior. A council of regency declared the 5-year-old Prince Mihai regent when his father was missing from Bucharest and his grandfather, King Ferdinand, was in declining health. On July 20, 1927 the old monarch died and his grandson became King Mihai I of Romania. Even at that young age he was described as intelligent and serious. He was reigning with a Council of Regency acting on his behalf when his father, Prince Carol, attempted a coup d'etat but was arrested in Britain by Scotland Yard. In 1930 the Peasant Party invited him to come take the throne. He returned to Romania at which time, over some strong objection, his son was 'deposed' and he became King Carol II. 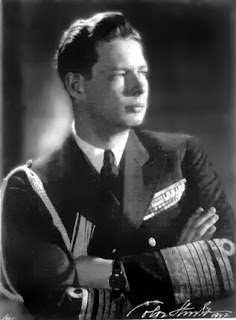 Still, things did not calm down for the Royal Family. Adolf Hitler took territory after territory from the Greater Romania created after World War I. King Carol sided with Germany and after a massive demonstration in 1940 Mihai was again sworn in as King of Romania.
However, the political & military masters in Bucharest intended the 19-year-old king to be only a symbolic figure and gave him orders as if it was he who was their servant. The King of Romania had no idea his nation had invaded the USSR until it was announced on the BBC. The ministers distrusted the young monarch who was flawlessly devoted to his people and his royal duties and who displayed, with his mother, sympathy for the Allies by speaking English constantly. His high morality would not permitt him to go along with Nazi-backed efforts to persecute the Jewish population though there were limits to what he could do to help. Finally, King Mihai was able to enlist the support he needed to end the pro-Axis government ruling Romania. He sent peace emmissaries to the Allies (dangerous considering the stance of his government) but was met only with silence. In fact, the Allies had already agreed to turn Romania over to the USSR, in return for Greece, who were claiming Eastern Europe for future conquest.


The Gestapo was aware of some of the king's activities but dismissed him because of his youth. They were unpleasantly surprised when in 1944 the young King successfully led a coup d'etat against the pro-Nazi government. He arrested the former dictator and his collaborationist officials in quick order. He then went on the radio and announced the end of the war against Russia, the Nazi alliance and a return to democracy for Romania. The people went wild with joy at this seemingly miraculous turn of events. The Nazis responded by bombing the Royal Palace but the King had already evacuated. Romania had been saved from dictatorship and from going down with Nazi Germany, by an upright monarch and a few officials who had continued to keep loyalty to king and country first in their hearts. Faithfulness had proven mightier than tyranny. 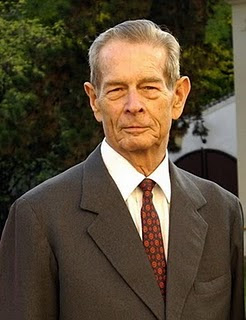 King Mihai reinstituted the 1923 democratic constitution, signed an armistice in Moscow and moved his country from the Axis to the Allied camp. However, his achievements went unrecognized and unappreciated by the world community. Romanian land was given to Russia and the King had to submit to a Soviet army in his country. Romanian communists were urged from Moscow to rebel and were given Russian support. Force of Red Army troops won many "converts" to the Red camp and King Mihai was forced to appoint Stalin's candidate for head of government. The King left Bucharest in protest and refused to cooperate with the Communist regime that was intent on establishing a pro-Russian dictatorship. The Red Army terrorized the public and saw to it that a pro-communist government was elected to office. Finally, the tyrannical government tired of their ethical monarch and demanded that he abdicate or else 1,000 students would be executed. The king had to agree, and even after the collapse of the USSR, has only recently been given recognition as a former Head of State. He has been urged to run for President but has consistently stayed away from entering politics, though a royal restoration is still hoped for by many Romanians at home & abroad.
Posted by MadMonarchist at 12:27 AM