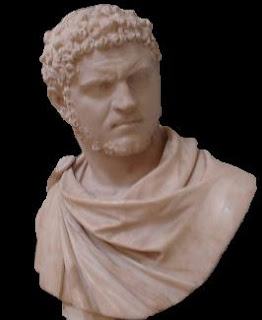 The death of Emperor Septimius Severus in 211 saw the Roman imperial throne pass to two brothers, his feuding sons; Caracalla and Geta. Popular history has usually condemned Caracalla to the ranks of the “bad” emperors of Rome, a listing which has not always been entirely accurate. To some extent the same may be said of Emperor Caracalla whose reputation has often suffered at the expense of the glorification of his short-lived brother Geta even though there is no real evidence of him being any more worthy of praise than his brother Caracalla was of condemnation. The death of Geta has allowed contemporaries and successive generations to paint him in whatever idealistic fashion they desire while Caracalla lived on to make hard decisions, stirring opposition as well as support and earning enemies along the way.

He was born in Lyons on April 4, 188 AD as Lucius Septimius Bassianus. After his family adopted itself into that of the Emperor Marcus Aurelius his named changed to Marcus Aurelius Antoninus Caesar. The nickname “Caracalla” came from a long hooded cloak of the prince’s design, modified from a style worn by the Celts or Germans, known as a “caracallus”. He had been on campaign with his father when Severus died and he was always a warrior monarch. Septimius Severus had told his sons, “Agree with each other, give money to the soldiers, and scorn all other men”. This was fairly practical advice given how vital the military had become to the Roman Empire though it was fairly naïve of him to think Caracalla and Geta would ever be able to agree on anything. During the final years of the late emperor the two brothers had already begun a rivalry and had attracted their own fiercely competitive respective followers.

Upon the death of Septimius Severus it was, not surprisingly, Emperor Caracalla who first tried to gain sole rule of the empire. Although often criticized for this since there is every indication to believe his father had intended it that way as he had granted Caracalla the title of “Augustus” quite a long time before extending the same honor to Geta. However, Roman mothers could be fairly formidable and the Empress Julia Domna took the side of her younger son and insisted that power be shared. So it was that joint-sovereigns, Emperor Caracalla and Emperor Geta, both returned from Britain with the ashes of their late father to the Eternal City of Rome. Such a system could never hope to be successful and one wonders how anyone could have ever thought it would be. They divided their palace on the Palatine Hill between them, walling themselves off from each other, but that was no real solution. Finally they seized on the idea of dividing the empire between them; Geta taking the east and Caracalla the west but their mother would have none of it.

Not surprisingly, 10 months into their joint reign Geta was dead, supposedly murdered by Caracalla himself in the very presence of their mother. Caracalla told the Praetorian Guard (who he gave a considerable increase in pay) and later the Senate that Geta had tried to murder him and he had only acted in self-defense. Some believed him but the many and powerful supporters of his brother certainly did not and to maintain himself on the throne Caracalla carried out an old-fashioned purge with some estimates as high as 20,000 as the number killed for being partisans of Geta or suspected of sympathy toward him. There was really no way around this sort of thing, it had happened before and was regarded as a necessary evil in such situations. However, relations with the Senate would never be smooth because of this if nothing else and the reign of Caracalla would forever have a somewhat sinister flavor because of the murder of Geta and its aftermath.

To escape this atmosphere of intrigue and resentment in Rome, in 213 Emperor Caracalla set off on a grand tour of the Roman Empire, first visiting the German frontier. He never forgot the advice of his father and was always comfortable in military surroundings. He took good care of his soldiers and his soldiers always adored him for it. Moreover, he impressed them with his own sort of humility. True, his rule was absolute and unquestioned and he would obviously tolerate no dissent from any quarter, but he did not live a pampered lifestyle. He marched on foot alongside his men, he ate the same coarse local food as they did and would even grind his own flour. There was a noticeable morale boost and in the summer of that year the Roman legions won a number of victories against the Germans in several areas, prompting the Senate (which was not of a temperament to heap undue praise on their emperor) to vote Caracalla the title “Germanicus Maximus”.

As he traveled east the Emperor became more and more obsessed with the figure of Alexander the Great, adopting him as his personal hero and role model. Caracalla even obtained some elephants to accompany him and became very harshly disposed toward the disciples of Aristotle after hearing that the philosopher may have been involved in the death of his hero. Beyond this though Emperor Caracalla had an appreciation for Greek history and culture in general and he enjoyed visiting the scenes of great events in Greek history and commemorating Greek heroes. Yet, this tour was not without controversy. The highlight, certainly for Caracalla, was visiting Alexandria where he went to pay his respects at the tomb of Alexander the Great, leaving his purple robe and imperial regalia as tribute to the revered conqueror. However, for some reason lost to history an incident was provoked that led to the Roman troops carrying out a massacre in Alexandria resulting in thousands of deaths. The cause will never be known but the most popular theory again goes back to Emperor Geta and that it was some criticism or accusation concerning the death of Geta that aroused Caracalla’s fury against the people of Alexandria. Whether true or a story invented later to fit pre-established prejudice we may never know.

In any event, while the Emperor was in the neighborhood of the east it would hardly be fitting not to carry on the tradition of waging a war against the Parthians. It had become almost a job requirement (I take power, II eliminate rivals, III celebrate, IV fight the Parthians…) and a recent civil war had left them particularly vulnerable. Emperor Caracalla took the side of one of the factions then turned against them and laid waste to the region east of the Tigris. After returning to northern Iraq and planning further campaigns disaster struck. A plot against the Emperor had been hatched but he could not be warned in time. Suffering from an upset stomach Emperor Caracalla had a rest stop on his way from Edessa to Carrhae on April 8, 217 when one of his guards, the disgruntled Julius Martialis, killed him with a thrust of his sword. The assassin was himself immediately killed and the 29-year-old emperor was cremated and his ashes taken back to Rome and placed in the Mausoleum of Hadrian by his mother. After her death both Empress Julia Domna and Emperor Caracalla were deified by the Emperor Elagabalus.

Today Emperor Caracalla is generally not thought very well of. Reasons why are easy to point to yet it all stems from one misdeed; the death of his brother and to be fair it must be said that so much would not have flowed from that if not for the fact that Caracalla felt so terribly guilty about it which a heartless man would not have done. It is also often forgotten that he was, personality aside, a good emperor. He always took time to hear appeals for justice, he reformed the currency and in the Antonine Constitution of 212 was the first emperor to extend Roman citizenship to all free men across the empire. Rome thus became less a collection of countries ruled by one favored people and more of a commonwealth based on shared laws and loyalties. His most lasting legacy, however, was undoubtedly his building programs and if any average person today recognizes the name of the late emperor it is probably because of the ruins of the magnificent Baths of Caracalla that remain standing to this day.
Posted by MadMonarchist at 1:20 AM