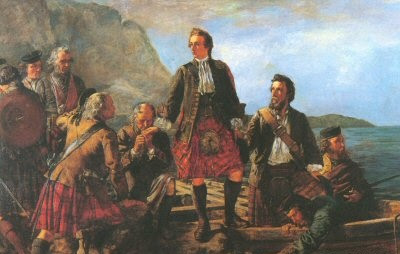 There is probably no more famous royal pretender in history than “Bonnie Prince Charlie”, son of the “Old Chevalier” and grandson of King James II of Britain. His story has become the stuff of legend and he has been as unjustly vilified by the Hanoverians as he has been romanticized by Jacobites. However, as with any question of this sort in western monarchy, the cause was more important than personality and for Jacobites it was that cause; royal legitimacy, that was really what was being venerated in song and story. The romantic image of the “Young Pretender” was never meant to be an accurate depiction of the man but rather the symbol of a struggle, an icon to which could be attached various ideals from pristine, divinely ordained monarchy to the struggle against the centralization of power in Britain to Scottish nationalism. In all of that it would be easy for the prince to be lost.

Prince Charles Edward Stuart was born in Rome on December 31, 1720 and grew up in Rome and Bologna. His family life could be tumultuous but it was affectionate and like his father before him he was raised with the expectation of one day restoring the House of Stuart to the British throne. Toward this end he was given military training from an early age and first saw battle at the siege of Gaeta in 1734. He was sent to France in 1744 to lead a French army in an invasion of Britain but the plan fell through. The year before Prince Charles had been named regent by his father to give him the authority to act in his name to pursue the restoration. Plans were constantly being made which seemed more urgent the longer the German House of Hanover consolidated itself on the British throne. Finally, in 1745 the gamble was made and Charles set sail for Scotland, the home of his ancestors and where he could expect the most support.

Unfortunately for him the French fleet that was to accompany him was scattered by bad weather and he was left to fend for himself. Undeterred, he landed in the northern islands and proceeded to Glenfinnan where he rallied the highland clans (which were mostly Jacobite in sympathy regardless of religion) and raised the Stuart royal standard proclaiming his father King. However, not all of Scotland was with him. Some of the highland clans refused to join what seemed a hopeless cause and most of the lowlands were firmly loyal to the House of Hanover. Still, after enlisting the eminent soldier Lord George Murray the Prince marched on Edinburgh, capturing it without a struggle. Later, in a shocking turn of events, his Jacobite army, armed for the most part with swords rather than muskets, surprised and soundly defeated the British army of Sir John Cope at Prestonpans.

Buoyed by this victory Prince Charles, with 6,000 men, marched south into England. He hoped to rally the public to his side (King George II being far from universally popular) but aside from a few hundred English volunteers (mostly Catholic) the population either took the side of the House of Hanover or chose to sit by the sidelines to see which side would win. Prince Charles reached as far south as Derby and George II was making plans to evacuate London and return to his native Germany if the situation deteriorated. However, the government had a man in the Jacobite camp, a double agent, who assured the Scots that George II had tens of thousands of troops converging on their position. Prince Charles, having beaten the odds already in coming so far, wanted to throw caution to the wind and press on. Lord Murray and the highland chieftains, however, overruled him and ordered a retreat back to Scotland. In fact, the situation was not as hopeless as it had seemed but disaster had been averted for King George II and henceforth the winds of fortune would blow in his favor.

Prince Charles was demoralized marching north but his small army of rough warriors was still formidable. At Falkirk in January of 1746 the Jacobites won another stunning victory over the pursuing government forces of General Henry Hawley. Prince Charles wanted to take the initiative and renew the offensive after this victory but was again overruled. The efficient and ruthless Duke of Cumberland, son of George II, took over the pursuit and chased the Jacobite army from pillar to post across Scotland until they made their final stand in the far north at Culloden Moor. The battle was heroic, it was glorious and it was an utter disaster for the Jacobites. Absolutely every advantage was held by Cumberland but with bagpipes wailing and swords held high the Jacobites made one last great ‘highland charge’ and were all but annihilated. Cumberland showed no mercy and the aftermath of the battle was a scene of horrific butchery.

His spirit crushed, Prince Charles fled to the outer islands. Despite a huge bounty placed on his head by George II no one betrayed him and he made his escape with many legends, stories and songs told ever since about his harrowing flight. Picked up by a frigate he was returned to France. Charles had a daughter by a mistress he had met in Scotland during his ill-fated adventure but after the defeat at Culloden he was a broken man in every way, plagued by depression and began to drink heavily. During the Seven Years War (known in America as the French & Indian War) he was summoned to Paris to discuss his participation in a French invasion of Britain. Intoxicated and spiteful he did not react well to the grand promises of the French minister. He had heard it all before and saw what such promises were worth. France would not deal further with him and, as might have been expected, their planned 100,000-man invasion, never came off.

In 1766 his father died and the faithful few Jacobites proclaimed the prince King Charles III. However, this time there was no recognition of his title from the Pope. Most of the major powers in Europe viewed the Jacobite cause as lost and it was no longer in their interests to maintain recognition. In 1772 Charles married a Belgian princess with whom he moved to Italy. She began having an affair with an Italian artist and left the prince in 1780, claiming he had been abusive. The discarded, defeated and dispirited would-be King finally came to the end of his sad life in Rome on January 31, 1788. His remains are today buried in the crypt of St Peter’s Basilica in the Vatican alongside his father and brother. Jacobite remnants continued on after his death but for all intents and purposes their struggle had been decided on the cold, damp ground at Culloden and it was the hope represented in the 1745 rising and the romantic image of the young prince come to reclaim the throne of his ancestors that captured public imagination. It is also, for obvious reasons, that image which most prefer to remember rather than the tragic fate of the man himself once known as “Bonnie Prince Charlie”.
Posted by MadMonarchist at 1:39 AM