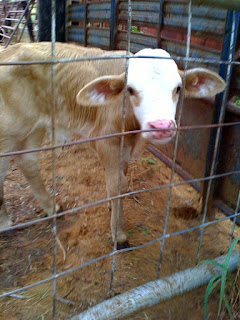 My latest addition. This poor little guy of mine was found after two weeks of being unable to feed from his mother. After bringing him home to bottle feed I did not at first think he would pull through. Thankfully, he has improved quite a bit and is eating well. He's also the most tame calf I have ever seen. Before I put him in the pen he was following me around everywhere like a puppy -even tried to come in the house. This picture was taken yesterday right after his breakfast.
Posted by MadMonarchist at 12:14 AM