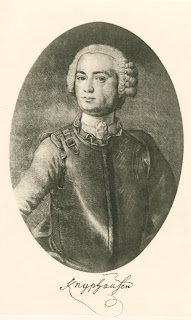 Wilhelm Reichsfreiherr zu Innhausen und Knyphausen was born in Lützberg on November 4, 1716 and was destined from birth for a military career. Most famous for his command of the German mercenaries fighting with the British in the American War for Independence, the ties between the family of von Knyphausen and Great Britain go back much farther as his father had been the colonel of a regiment that had fought alongside the great Lord Marlborough. Wilhelm von Knyphausen joined the Royal Prussian Army in 1735 and eventually, in 1775, attained the rank of lieutenant general, a rank he kept in the army of Hesse-Kassel. When the American War erupted and Britain, as in times past, employed Hessian soldiers to supplement their own forces von Knyphausen was already a veteran of 42 years of military service and of rather advanced age for the time as was his immediate commander Lt. General Leopold Philip von Heister.

Coming to America in 1776 with the second division of German soldiers largely, but certainly not exclusively, from the Hessian states. He led his forces with skill and bravery at the battles of White Plains, Fort Washington, Brandywine, Germantown, Springfield and Monmouth all but one of which were British victories. The first real action he saw in America was at the storming of Fort Washington where he displayed considerable zeal and energy for a man of 60-years-old. Afterwards he was put in command of the Crown forces occupying New York City, a post he held between 1779 and 1780. When General von Heister had a falling out with British General Sir William Howe and went home to Germany in 1777 Lt. General von Knyphausen replaced him as supreme commander of all German forces in America. The German troops (collectively known as Hessians regardless of their origins) were always treated as a separate allied military force commanded by their own officers. Still, British officers were given dormant commissions to ensure that the top command remained in British hands and never fell to von Knyphausen.

Unlike his predecessor, von Knyphausen had a good working relationship with the British who trusted him for his skill and considerable experience at least to the extent they were capable for a foreign soldier. In the assault on Fort Washington the Hessians faced the most difficult sector of the battle but despite the danger, and his years, General von Knyphausen led by example, leading his men in person from the front and tearing at the obstructions with his bare hands and his men struggled up the approach. He and his men were ordered to garrison Trenton, New Jersey the site of one of the more celebrated little victories of the Continental Army and one that greatly demoralized von Heister. General von Knyphausen had sent a word of advice to the commander at Trenton, Colonel Johann Rall to fortify the town in case of attack but his advice went unheeded with disastrous results for the Hessians. Yet, at the battle of Brandywine he held the right flank of the British line, successfully demonstrating to divert rebel attention away from the main British attack.

Knyphausen commanded the vanguard out of Philadelphia for the battle of Monmouth and later was assigned to garrison duty on upper Manhattan Island, holding command of that area when Sir Henry Clinton was engaged elsewhere. However, von Knyphausen suffered a terrible loss the same year as the battle of Monmouth, 1778, the death of his beloved wife. With the British army going more on the defensive, his health deteriorating and suffering the simple effects of old age including creeping blindness from an eye cataract General von Knyphausen finally left America in 1782 having, he said, achieved neither glory nor advancement; a rather humble estimation considering the numerous victories he participated in. He spent his final years as military governor in Kassel where he died on December 7, 1800 respected by his troops and well regarded by his contemporaries.
Posted by MadMonarchist at 1:05 AM