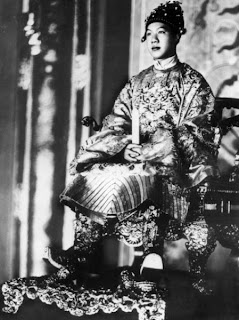 The last Emperor of Vietnam was born Prince Nguyen-Phuc Vinh Thuy on October 22, 1913 to the soon-to-be Emperor Khai Dinh, a man who was brought to the throne after an attempted royal coup by his predecessor. Khai Dinh pursued a policy of peaceful cooperation with the French colonial authorities and his young son had hopes placed in him, in Indochina and Europe, to be the future ideal monarch who would embody the best of Franco-Vietnamese partnership. At the age of 9, after a traditional education in the palace, he was sent to France to attend school and learn according to modern, western standards. In 1926 his father died and the teenage royal was hurriedly shipped back to Vietnam for his formal enthronement as emperor, taking the name Bao Dai meaning “keeper of greatness”. Once done he promptly returned to France to finish his education.

He stayed away longer than was required though the French authorities and the young monarch himself were in agreement on the issue. The conservative mandarins at court were not and worried that their “Son of Heaven” was being corrupted by western influences. While in France Bao Dai picked up a love for western sports, fast cars, gambling and French girls. When he did return to take up his royal duties he quickly annoyed the traditionalist mandarins and consorts by declaring the start of a new era of reform. He abolished kowtowing, wore western clothes most of the time and announced that rather than keep a harem he would have only one wife to cut down on the intrigues and power struggles that had originated in that area in the past. He also carried out what some termed a coup, getting rid of the ‘old guard’ at court and bringing in a new cabinet of modern-minded nationalists.

However, his effort at reform and modernization, first welcomed by the French, was soon frustrated by them. He found that he was to be given no real authority to govern his country as he saw fit and, denied power, many of his new government resigned in disgust; notably the pro-independence Catholic mandarin Ngo Dinh Diem. Disheartened by this, Emperor Bao Dai devoted his time to hunting trips, parties and enjoying himself, living, he said, like an exile in his own country. He also married the beautiful and devoutly Catholic daughter of a southern family; Empress Nam Phuong. The marriage was somewhat problematic due to the religious differences and was not always happy as it soon became clear that while the Emperor might restrict himself to having only one wife that did not mean he had adopted a truly monogamous life. Still, he secured the succession by having 2 sons and 3 daughters by his wife.

During World War II the French government in Vichy granted Japan permission to occupy Vietnam without so much as informing Emperor Bao Dai. Returning to the Forbidden City to find Japanese soldiers on guard he was faced with an accomplished fact and to remain on his throne required a level of cooperation with the Japanese. In 1945 the Japanese carried out a coup against the French colonial forces and at their urging Emperor Bao Dai formally repudiated all past treaties with France and declared the independence of the Empire of Vietnam as part of Japan’s “Greater East Asia Co-Prosperity Sphere”. Yet, the Rising Sun of Japan was rapidly setting by that time and after only a few months a communist organized revolution had broken out in the north in August. The communist leader Ho Chi Minh declared the independence of the Democratic Republic of Vietnam in Hanoi, easily sweeping aside adherents of the recently established Empire of Vietnam which still existed almost exclusively on paper.

Emperor Bao Dai warned the French that the colonial era was over and their rule would never be restored and he desperately tried to obtain foreign recognition for his struggling monarchy but none was forthcoming. The fact that the communists were the only major force to oppose the Japanese gave them considerable prestige with the Allies and Bao Dai was assured that his association with the Japanese had made him ‘untouchable’. After the reds had effectively taken over all of north and central Vietnam anyway an ultimatum was delivered to Bao Dai calling upon him to abdicate. Remembering his French education he had no desire to end up like King Louis XVI and knew any opposition to the revolution would be futile. His own imperial guards had stood silently while communists tore down the yellow dragon flag and raised the red banner in its place right in front of the Forbidden City. Bao Dai quickly arranged a formal ceremony, donned his imperial robes and solemnly handed over his sword and seal to the representatives of the new government. In the eyes of many this occasion marked the passing of the Mandate of Heaven from the Nguyen dynasty to the regime of Ho Chi Minh.

At first Bao Dai, then officially known as “Citizen Vinh Thuy” went to Hanoi to serve as an advisor to the new regime which at that stage still claimed to be nationalist but which was communist dominated. Although Ho was very respectful the former Emperor soon saw what was really going on and left the country, going into exile in Hong Kong. Around this same time the French began trying to reestablish their colonial rule in Indochina, not recognizing either of the “independent” governments that had been proclaimed since their overthrow by the Japanese. The French had dealt with uprisings before and were, at first, not too concerned. However, they soon realized they were going to have a major war on their hands if they were going to reestablish colonial rule or even any sphere of influence in Indochina. The world (dominated by the USA and USSR after World War II) had turned against the idea of colonial empires and France needed someone they could trust to lead an opposition government against the communist regime of Ho Chi Minh.

The former Emperor Bao Dai was the logical choice. Although distrusted by many he did have close ties to France, was supported by monarchists and regardless of his abdication at least had some status of legitimacy. Thus in 1949 he was installed (not officially restored as emperor) as the “Chief of State” of the State of Vietnam based out of Saigon. However, total independence, often promised, was not completely delivered and the former emperor was soon back in the south of France leaving affairs of state in the hands of the French and his ministers. The communist regime denounced him as a traitor and even sentenced him to death in absentia. The U.S. was bankrolling the French war effort against the communist VietMinh and despite sending $4 million a year to Bao Dai himself never fully supported his regime or held out much hope for its success. The primary U.S. agent in South Vietnam, OSS (later CIA) Colonel Edward Lansdale had no use for the former emperor and was eager to see Ngo Dinh Diem in charge of Vietnam.

As the French war came to a close Bao Dai was forced to name Diem prime minister in the hope that this would ensure continued U.S. support for South Vietnam. Diem had long monarchist and nationalist credentials but despite his pledges of loyalty soon came into conflict with the Chief of State. The austere Catholic Diem was as far from Bao Dai in character as two men could be and the pair were often referred to as the ‘monk and the playboy’. Aside from his rather indulgent lifestyle Diem disapproved of the rather loose governing style of the former emperor who based his power on a coalition of autonomous local powers allowing groups like the Cao Dai and Hoa Hao religious sects, the Binh Xuyen in Cholon and others to manage their own affairs so long as they fought the communists and paid tribute to the former emperor. When Diem tried to crack down on these groups and centralize power the appeals went out to Bao Dai in France who attempted to recall Diem.

Knowing he would be dismissed, in 1955 Diem (on the advice of Lansdale) arranged a referendum that would put the choice to the public: retain the former emperor or make Diem president of a new Republic of Vietnam. With his own men in charge of the polling places and Bao Dai unable to campaign on his own behalf there was to be no doubt about the outcome of the “vote”. Bao Dai protested but could do more and when a ridiculously large majority came back in favor of Diem he resigned once again and formally ended, for good this time, his political role in Vietnam. His former wife, the beloved Empress Nam Phuong, having died Bao Dai married again in 1972 to a French girl, Monique Baudot, converted to Catholicism and settled down to a quiet life in exile. He tested the waters of the expatriate community once or twice over the succeeding years but found little support for the monarchy since every regime since agreed on vilifying the Nguyen and the emperor himself even if they agreed on absolutely nothing else. He died in Paris in 1997 passing his legacy on to his eldest son the Prince Imperiale Bao Long.
Posted by MadMonarchist at 12:39 AM