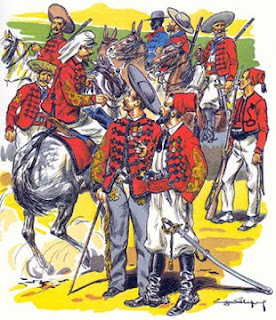 During the period of the French intervention and second Mexican Empire of all the units of the Mexican Imperial Army none were so feared or hated by the republican revolutionary forces as the contra-guerillas commanded by the notorious Colonel Charles Dupin. Operating mostly in north and northeast Mexico the contra-guerillas were formed in October of 1862 as a modest force of two cavalry squadrons. They proved so ruthlessly effective however and became such an elite force (with better pay, better food but riskier service) that by the summer of 1864 the force had grown to 850 soldiers organized into the two cavalry squadrons plus four infantry companies and a two gun mountain artillery battery. Today it is common to portray the contras as a French force but, in fact, they were part of the Imperial Mexican Army and, despite being commanded by a French officer, most in the French army viewed the contras with considerable distaste.
Emperor Maximilian did as well and at one point had the brutal commander of the contras relieved of duty. However, though harsh and even ruthless in their methods Colonel Dupin and his contras were frighteningly effective. Dupin has been described as savage and brilliant, courageous and brutal. The contras came from an extremely diverse background; mercenaries, regular soldiers of various nationalities, frontier ruffians and even a few Americans after the civil war there. Discipline was harsh for such a rowdy bunch but they had to be for the type of war they were fighting. The contras essentially employed the same brutal tactics used by the republican bandits against them. The fighting on the northern frontier was particularly brutal and both sides could be equally merciless. Dupin himself purposely encouraged the popular image of himself and his contras as invincible and bloodthirsty, employing a little wild-west type psychological warfare that ensured they were feared all across northern Mexico.
Early on the contras wore a uniform that consisted of a rather simple grey outfit trimmed in blue with a silver-laced sombrero. After 1864 they took on a more outlandish appearance with the cavalry wearing grey or black sombreros, a bright red dolman with black lace and bright red sashes. Foot soldiers wore uniforms similar in style to the French zouaves and when the second squadron was raised they wore sky blue dolmans but it was the red jackets and the red sashes that all the troops wore that their republican enemies named them los diablos colorados or “the Red Devils”. As stated, the contras could attract a very tough brand of soldier because of the better pay and equipment they received. Yet, there were drawbacks. Because of their fierce reputation they could expect no mercy if they were ever taken by the enemy and with their bright red hussar jackets and red sashes they were pretty easy to spot in a crowd of prisoners. After the disastrous battle of Santa Gertrudis for example a contingent of contras participated and were more willing to fight to the death than others and those who were captured were summarily executed by the Juaristas, sometimes brutally and then mutilated. It was also said that the widows of some of the Juaristas whose husbands had lost their lives to the contras raised funds to put prices on their heads. Needless to say, most chose not to stay on once the French had decided to cut their support and pull out of Mexico.
As stated, no other unit of the Mexican Imperial Army was as fiercely effective or so widely feared and hated as the contra-guerillas. Juaristas who were used to men more like Emperor Maximilian who constantly granted pardon to even the worst and most violent revolutions, who preferred the carrot instead of the stick, met their match in the contra-guerillas who were well armed, highly motivated and willing to be just as ruthless as their enemies in eradicating the republican guerillas and bandit gangs that terrorized northern Mexico. Some thought, then as now, that their rhetoric never matched their actions and that their reputation for cruelty was more of a scare tactic than actual reality. However, they were undoubtedly the most fearsome outfit of the war in northern Mexico and they came to be regarded as terrifying bogeymen by the population. Was this finally a successful tactic? It is hard to say. If you are going to fight -fight like you mean it I usually say but even at the time an observer noted that their brutal tactics, “ensured the submission of the people [but] was not likely to engender loyalty”.
Posted by MadMonarchist at 12:26 AM