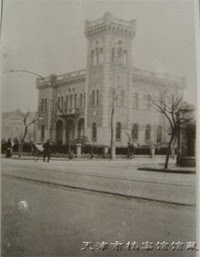 In 1902, during the reign of the ambitious King Leopold II, Belgium obtained a concession in Tianjin, China. It was the smallest of all the international concessions and the Belgian government never invested in the property to the same extent as those of the other powers. The building and development that did go on was nowhere near as extensive as those of their neighbors and sadly no buildings remain from the era of Belgian rule. In 1904 a contract was agreed to by Belgium, the Chinese Empire and the Compagnie de Tramways et d’Eclairage de Tientsin which gave that body a monopoly on providing electricity in the Belgian concession. This led, in 1906, to the creation of a tramway system by the company which extended throughout all the foreign concessions in Tianjin which made that city the first in all of China to have a modern transportation network, Shanghai only having a similar system two years later.

Belgium produced the carriages for this system though the electrical equipment came from Germany. The provision of electricity and the trolley system proved extremely profitable for the original Belgian investors. In 1937 the Japanese army confiscated the property of the company. Japan took complete control in 1943 and the Belgian workers along with their families were taken captive by the Japanese and sent to prison camps. After World War II ended the Japanese, knowing their control was lost, offered control of the company to the Republic of China. This was done and the owners of the company, in Brussels, tried by legal means to obtain compensation from the Chinese for their lost property by the success of the communists put an end to all such efforts. The Belgian trolley network was later expanded and continued in operation until 1972.
Posted by MadMonarchist at 1:31 AM