The Victors of Lepanto 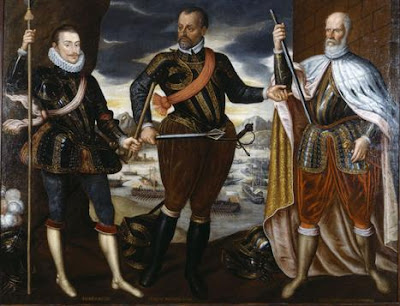 On this day The Mad Monarchist remembers the Battle of Lepanto. Seen above are the top commanders of the victorious fleet: (left to right) Don Juan of Austria (overall commander and leader of the ships of Spain), Marcantonio Colonna (commander of the ships of Papal Rome) and Sebastiano Venier (commander of the ships of Venice). We also remember all of those who contributed to the victory: The Kingdom of Spain, The Duchy of Savoy, The Republic of Genoa, The Papal States, the Knights of Malta and the Republic of Venice taking care to note that while the Ottoman Empire was 'down' they were by no means 'out' and remained a force to be reckoned with for some time to come.
Posted by MadMonarchist at 12:29 AM