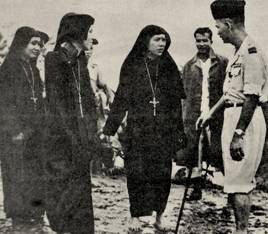 One of the unsung heroes of the First Indochina War was Colonel Jean Leroy. Of course, not everyone today would consider him a hero, he had plenty of enemies in his own time. Vietnamese Communists and later Algerian nationalists would certainly consider him a great villain. Was he a monarchist? Strictly speaking, no. However, his service in Indochina, in what was then the State of Vietnam, was on behalf of a government led by the former Vietnamese Emperor and in opposition to communist revolutionaries which is why I include him here. In the aftermath of World War II the French Republic had returned to Indochina to restore their colonial empire but found that such hopes were futile in light of the growing support for the nationalist VietMinh organization which was led, first secretly and later openly, by the Communist Party of the revolutionary Ho Chi Minh. To combat his proclaimed communist republic, based out of Hanoi, the French turned to the former Nguyen Dynasty Emperor Bao Dai. 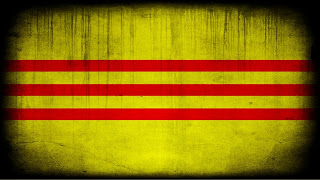 Emperor Bao Dai had abdicated in 1945 at the height of the August Revolution but had since left the country after becoming disillusioned with the communist domination of the government. He was restored as “Chief of State” for what was called the State of Vietnam based out of Saigon. It was allied to France and anti-communist but beyond that was a bit ambiguous. It was not officially a monarchy and yet the Chief of State, Bao Dai, was chosen because he had been the Emperor and for no other reason (aside from being French-educated and not antagonistic toward France). Monarchial trappings remained to some extent but the State of Vietnam was never really one thing or the other. This would have been a problem but there were plenty of other bigger problems to deal with, such as the on-going communist insurgency. The former Emperor was ill-equipped to handle the crisis and France proved ill-equipped to give him much help. France had no less than fourteen prime ministers during the years of the First Indochina War which did nothing to help the French cause.

The United States, eager to stop the spread of Communism, ended up providing roughly 80% of the French war effort as well as providing war materiel and a few advisors to the hard fighting French forces which were hard pressed. All of these hardships and shortages meant that groups on the ground in Vietnam often had to fend for themselves such as the minority religious groups such as the Hoa Hao (effectively Buddhist fundamentalists), the Cao Dai (a combination of all major religions) and the Vietnamese Catholics. The Catholic community contributed to the war, and though there were some supposed Catholics who joined the Communists in the north, the faithful Catholics knew they could never support a regime based on atheism and hatred of tradition and so determined to resist them, on their own, if they had to. One of my favorites was a particular Vietnamese bishop who formed his own militia and ruled his own little fiefdom in central Vietnam during this period.

The largest concentrations of Catholic forces, however, were in the south in the Ben Tre province of Cochinchina and Phat Diem in Annam (central Vietnam). In Ben Tre it was Colonel Jean Leroy who took charge of protecting his people from the communist insurgents. Jean Leroy was a Franco-Vietnamese officer (born around 1912 I estimate, I don’t know his exact birth date) of the paratroopers and even had he not supported the non-communist regime, even if he had not been a Catholic, he would probably have been killed simply for being of half-French and half-Vietnamese ancestry. Colonel Jean Leroy took it upon himself to form the first “Catholic Brigade” in 1947 on An Hoa Island. These 60-man brigades were merged to form the UMDC or Mobile Christian Defense Units which operated throughout the province in support of the local units called Bao An or “Peace Guardians”. All of this was done in an act of independent self-defense by the Vietnamese Catholics in reaction to what were terrorist attacks by the communists.

When regular French forces arrived they were surprised to find these Catholic areas already under the protection of these modest but very disciplined and determined independent, local militias. Still, they respected their abilities and when the regular French army was withdrawn from the area in 1949 Colonel Jean Leroy was given command of all UMDC units and responsibility for the whole province. In fact, this was simply official recognition of the situation that already existed. Colonel Leroy, using his military and diplomatic talents, had already taken it upon himself to defend the province and had organized the forces himself which had done just that. It is a testament to the effectiveness of the Catholic Vietnamese soldiers that within one year they had the entire province pacified and totally free of communist harassment. Few other areas could boast of such a record even with far greater resources at their disposal. However, Colonel Leroy had mobilized public support for his forces in these Catholic areas, the people understood the consequences of the conflict and he developed highly advanced rapid-response tactics and from the start had organized his military forces to fit the needs of the unique style of warfare in Vietnam.

It was certainly no easy task, however, eventually Colonel Leroy was to face more trouble from his own side than from the Communists who he had made such short work of. Knowing that the oppressed peasants were the primary base of support for the communists, Leroy lowered their taxes and ordered the wealthier landlords to pay more money to support his own troops as well as social projects to improve the lives of the peasants and so earn their support. Naturally, the landlords resented this and the generals of the National Army of Vietnam, which the French had by then allowed to be formed, were embarrassed by the fact that Colonel Leroy, with about 3,240 troops, was accomplishing more than they were with 5,840 troops. It made them look very bad that one colonel had put together this small motley force and yet was doing more with less and in record time than they were with all of the resources at their disposal. So it was that after earning too many enemies in high places with his record of success, Leroy was promoted or “kicked up-stairs” and his Catholic brigades were disbanded in 1952. The area was handed over to Vietnamese National Army forces which soon proved totally incapable of keeping the province free of Communist activity. For his part, Colonel Leroy went to fight as a counter-terrorism officer in Algeria on orders from President DeGaulle.
Posted by MadMonarchist at 12:22 AM