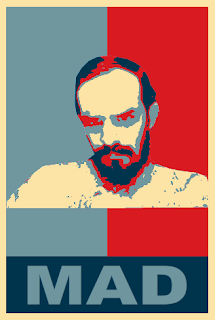 We have been hearing a great deal about the “Occupy Wall Street” demonstrations which have gathered around the country. Although they are incoherent and certain individuals can be found in the crowds espousing almost every variety of thought, philosophy or ideology. However, I cannot help but view them as a radically leftist group overall. I base this not only on what most of them are shouting in the streets but based on those who have embraced them. The mainstream media that totally ignored the “Tea Party” protests, until they began to vilify them, have been providing constant, non-stop coverage of the OWS protests. Nancy Pelosi, President Obama, Rosie O’Donnell and the leftist tyrant Hugo Chavez of Venezuela have all embraced the protestors. You cannot tell me any of those people would be saying one kind or apologetic word about the protesters if they were in any way conservative, traditional or anything other than advocates of big-government socialism. They seem to me to be in every way the leftist reaction to the Tea Party people. Obama (a leftist) came to power to initiate a remaking of America based on the model of European social democracy. In response, the Tea Party formed calling for smaller government, cuts to spending and reforming at least or ending at best entitlements. They pushed the Republicans to victory in the last Congressional elections and now, as Obama drops in the polls and the economy gets worse the OWS movement comes forward in response to demand bigger government, more spending and more entitlement programs.

In some ways, conservatives, capitalists, GOP-supporters etc can take some heart from this. The OWS movement would not be happening if the leftists did not smell death in the air. As they have contemplated the possibility of Obama losing the presidency the socialists have been forced to take this action to try to frighten the political elites into staying on the socialist, big-government path. There are things I would agree with many of the OWS people on, but in a completely different way than they do. I would agree that bailing out the banks was wrong but not because it was a “bailout of the rich” but because I don’t think the state should bail out anyone. They should succeed or fail on their merits. I would agree that the US needs to “bring our troops home” but I would start with the 50,000 troops in Germany because they serve no purpose and the US should not be subsidizing the defense of Europe, especially from an enemy (the Soviet Union) that no longer exists. I am not an isolationist but I don’t think much of what American forces are doing now serves US interests or security. I would agree that there is too much of a cozy relationship between many big businesses and the US government but my answer would be to separate the two rather than have the one absorb the other, which is what they seem to advocate. That is socialism. They are for it, I am against it, plain and simple.

Some say we should take these protests very seriously, others say we should pay attention but not be too alarmed by them. I would prefer to err on the side of caution. I am not alarmed by them (they seem to be mostly members of the same old spoiled brat, cry-baby brigade for the most part and not terribly effective) as things stand now. However, I am concerned by them because I see so many of the same elements coming together that came together in 1917 to bring down the Russian Empire. We see the same groups involved; socialists, anarchists, labor unions, internationalists and anti-war protestors. We see the same complaints about income inequality (which can only be solved by making everyone poor -and even that’s never happened, a new elite simply replaces the old), we see the same cries of unfairness and inequality and we see again a diverse collection of subversive groups pushing for some vague “change” in the hope that they can cause enough chaos and confusion to emerge as the victors when the dust finally settles. So far the protestors have not caused much of a problem, which is a little disappointing for me as it prevents me from indulging my first wish that the Governors would deploy the National Guard against them with a clear conscience. So, in the absence of tear gas and rubber bullets we have to take a more cerebral approach to this problem.

The basic problem is one of mentality. These people are, largely, not the poor, working masses but educated (read indoctrinated) college graduates who have been taught a bunch of impossible, ideological nonsense based on the mistaken belief that it is possible to get something for nothing. They see the State as Santa Claus, able to produce “gifts” in some magic workshop completely out of thin air. They demand “free” college education, “free” healthcare and the forgiveness of debts. They fail to comprehend the fact that the government produces nothing and can only provide money for certain projects by confiscating it from others. As a prominent local Belgian-Texan once said about the public school system, “If anyone thinks there is such a thing as free primary education they should have a look at my land taxes”. As for the forgiveness of debts, were they to carry out such a thing every bank in the country would go out of business and they would be totally unable to obtain any loans -which is something else they are complaining about. They display a complete ignorance of basic economics. They scream about how much corporate executives are paid, oblivious to the fact that corporations only stay in business because people buy their products. If they are really upset about the bonuses paid to executives in businesses bailed out by the government they should direct their anger at the government since, if they had not been bailed out and had been forced to go bankrupt, all of their bonus contracts would have been voided. By being bailed out the government had to underwrite those contracts and abide by them. Yet, many of the same politicians who supported the bail outs now support the protestors.

That is also why these protests, at least in this country, will accomplish nothing or make things worse or both. As much as they may feign outrage at “the administration” they all know perfectly well they are going to vote for Obama or else not vote at all. If then we have a President Romney leading the next administration they will become even more furious and encourage the Democrats to be even more partisan and radically leftist. Then we shall see the Democrats be just as obstructionist and uncompromising as the Republicans are now being. And that perfectly illustrates why I do not consider “secession” to be an ugly or unthinkable word. The United States is every day more divided between two radically opposed and irreconcilable ideas with one side thinking the government should control almost everything and the other thinking the government should control almost nothing. Neither can ever get all they want and neither will give in. Because of that, neither idea is ever fully implemented and therefore neither can ever be concretely proven correct or totally ruinous. So, the two sides remain trapped in this loveless marriage that is the Union, accomplishing nothing, never proven right, never proven wrong but only becoming ever more and more entrenched in their own ideologies. In the earliest days when the President was expected to be above parties this was something he would handle but today this is not the case and such an idea is painfully absurd. In order to have something like that we would have to have a chief of state who was completely impartial, totally above party and faction and would therefore have to be immune to popularity tests and the democratic process, chosen by a completely non-political process but at the same time have a vested interest in the success of the country and sufficient power to enact good policy or at least block bad policy. And we all know that is never going to happen. We got rid of that nonsense once and for all in 1776. Oh…
Posted by MadMonarchist at 12:09 AM