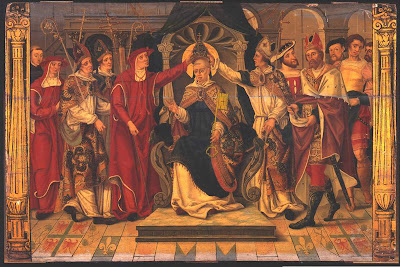 Pope Celestine V is an often misrepresented Bishop of Rome. Many will state that Celestine V was the only pontiff in history to abdicate, but this is not so. Although it is certainly rare in the extreme, no less than four pontiffs have abdicated in the long history of the papacy. What is true is that Celestine V was one of the most saintly men to sit on the Throne of Peter and one of the most reluctant. He was born Pietro del Morrone about the year 1209 and came from Molise. Not much is known about his formative years beyond the fact that he was a peasant whose father died when he was very young. Some accounts will say this forced him to work in the fields at an early age, but I tend to doubt that as most peasant children worked in the fields as soon as they were able even if their father was alive. In any event, he was familiar with manual labor and instilled with a strong faith by his mother Maria at an early age. Even as a child he was noticed to be bright, kind and compassionate as well as very religious. Thus, it came as no surprise that he entered a Benedictine monastery when he was seventeen-years-old. 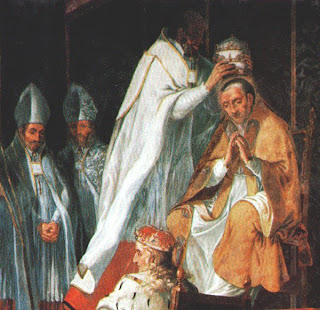 You know you have a truly Christian nature when you live the life of a Benedictine monk and still yearn for something more withdrawn, difficult and austere. So, Morrone and a few companions went to live in caves in the mountains, devoting themselves entirely to intense prayer and severe penance. St John the Baptist was his example and out of this work he eventually founded what became the Celestine order. While this work was underway, the Church was going through a pretty rough patch. There were tensions with the secular powers, the expansion of Islam to the south and papal elections were becoming increasingly difficult and quite long, drawn-out affairs. So, when Pope Nicholas IV died and the cardinals gathered in Perugia to elect a successor (because Rome was in pretty bad shape), Morrone sent a letter urging them to open their hearts to the Holy Spirit and elect a new Pontiff quickly. In the end, he may have wished he had kept silent on that issue because, after extremely long and lengthy disputes and riots going on in Rome, the cardinals decided to elect him. That was the last thing the simple, austere hermit wanted. His primary concern was his order, looking after the sick and impoverished and he had not the slightest desire to take on the responsibilities and particularly the bitter political entanglements of the papacy. 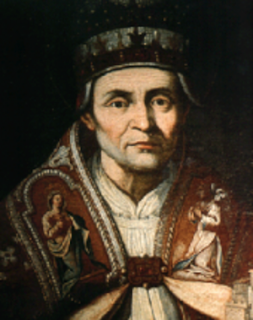 However, he was the one choice all agreed on, unconnected to any faction and undeniably of saintly character. Still, it took a great deal of effort to persuade him to accept the Papal Tiara. Among many other clerics and royals King Charles II of Sicily visited him to urge him to accept, which he finally did. Charles II escorted him to Aquila where he was formally consecrated as Pope Celestine V. The closeness of the Sicilian king was not purely religiously motivated. The politically innocent new Pontiff agreed to live in Naples rather than Rome and appointed everyone to office that Charles II recommended to him. He even took the step of naming the King “guardian” of the next conclave and he relied heavily on royal advice even in the normal administration of the Church which he had absolutely no experience with.

Discontent grew as many began to complain that the Pope had simply become a rubber-stamp pontiff for the Sicilian king. One of those most disconcerted with this state of affairs was the Cardinal-Priest Benedetto Caetani, an aristocrat who had very definite ideas about papal supremacy (which he would later, famously articulate without ambiguity) even at the expense of royal power. Pope Celestine V was without doubt a good and pious man. Even in his own time word spread of his miraculous deeds, however, his innocence of the world of power politics had left him as a pawn in the hands of others and reduced him to being little more than the chaplain to the King of Sicily. His religious sincerity remained admired by all but it became ever more clear with each passing day that he was simply not cut out to be the Supreme Pontiff. Never wanting the job in the first place, no one would have agreed with his unsuitability for the office more than Celestine V himself. He knew he was not up to the task and in quick order began looking for a way out. 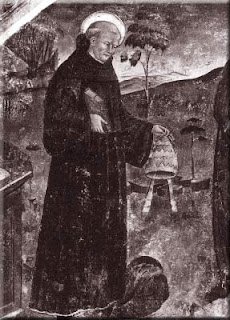 Conveniently, Cardinal Caetani was on hand to assist him in the process of abdication. He painted the picture (obviously not untrue) that Celestine V had been preyed upon by Charles II from day one. The King had pressured a simple, pious clergyman into accepting an office he neither wanted nor was fit for simply so that he could dominate him. Pope Celestine V, on December 13, 1294, after only five months and nine days on the throne, abdicated and charged the conclave to elect a new pontiff according to the rules established by Gregory X. In quick order, and with no lack of effort on his own part, Cardinal Caetani was elected in his place, taking the name of Pope Boniface VIII. He would go on to be a very controversial Successor of St Peter but certainly not lacking in decisiveness. Many at the time and in all the time since have condemned Boniface VIII for having his predecessor, the former-Pope Celestine V, arrested and imprisoned. Celestine tried to escape but it was to no avail and, for an ascetic hermit like Celestine, his life in confinement was hardly worse than his own preferred life of solitude. It should also be kept in mind that Boniface VIII was very concerned about someone “rescuing” his predecessor from his solitude, influencing him and using his name to challenge the unity of the Church.

Former Pope Celestine V endured his confinement as he did all the other misfortunes of his life but the conditions of the area in which he was held soon ruined his health and he died only ten months later on May 19, 1296. There were, of course, rumors that he had been murdered by his successor but no proof was or has ever been produced to support that theory. Even after his death he was used as a political pawn. In 1313 he was canonized by Pope Clement V and though none deny his saintliness, the canonization was done at the urging of King Philip IV of France as a way of further smearing the name of Pope Boniface VIII who had been his antagonist. Nonetheless, despite all the misfortunes of his reign, St Celestine V has remained blameless. His sincerity, piety and compassion have never been challenged and his intentions and motives were always pure. The fault lay with those who had used the innocent and uninformed saint to advance their own agendas.
Posted by MadMonarchist at 12:17 AM