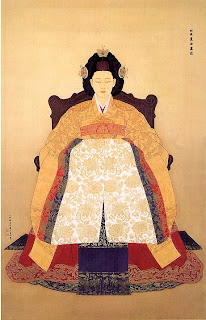 In this age of efforts to enforce to gender equality, it is easy to forget that, even in patriarchal monarchies of the past, women have often played crucial roles. One example of this is the Empress Myeongseong of Korea. She was a consort in a strictly Confucian monarch of the Far East and yet she was a formidable force and is still remembered by Koreans today as one of the champions of independence against the encroaching power of Imperial Japan. The future empress was born into the aristocratic Min family (hence her often being known as Queen Min) on October 19, 1851. She was orphaned by the time she was 8-years old, which was actually something of a benefit to her in terms of marriage as when the future Emperor Gojong went looking for a wife (when he was 15-years old) the preference was for a girl without many relatives who would be seeking favor at court and be inclined toward corruption. The little princess had an average education, nothing outstanding but sufficient and she was lovely, from a respected family and in good health so as to be expected to provide many children. So, after a lengthy process of selection, she was finally chosen to marry the young King of Korea when she was 16-years old on March 20, 1866. 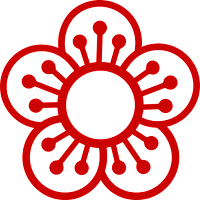 Queen Min, from the very start, showed herself to be decisive, intelligent and assertive, not content to simply sit back and be a beautiful wall flower. She was very modest, very frugal and had no time for frivolity, extravagance or the usual social gatherings with their gossiping elites and trivial chatter. She was concerned with bigger, political issues, the fate of the monarchy and the Korean nation. It was a time of great tension as the traditional power of Imperial China was on the decline, the power of Imperial Japan was growing and the Russian Empire was showing increased interest in the region, partly for economic reasons and as part of their on-going quest to find an ice-free port on the Pacific. Queen Min caused a great many tongues to wag as she studied political affairs, international relations, economics, military matters and every other subject of importance that was not considered normal for ladies. She became her own teacher and greatly expanded her knowledge, not only on political affairs but also science, philosophy and religion. 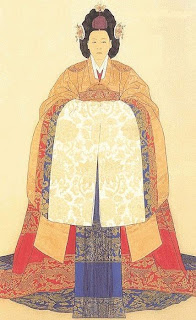 The former regent and “great prince of the court”, the Daewongun, was particularly annoyed with her ambition and interest in affairs of state. Undeterred, Queen Min worked with courtiers and officials to establish her own circle of power, supportive of her and opposed to the Daewongun. When her first child by King Gojong died, the Daewongun saw an opportunity to be rid of Queen Min and declared her incapable of having male children. He then ordered the King to give one of his concubines a try who, to the delight of the Daewongun, later gave birth to a healthy baby boy. This was to be the means of pushing Queen Min aside, but she would not give up and roll over. She rallied the officials loyal to her and, in council, proposed that, as the King was then 22-years old, the regent should retire. Caught off guard the Daewongun had no choice but to accept their decision and retire. The Queen also had the newly delivered concubine shipped off to the country and her child died not long after. Not surprisingly, some accused Queen Min of having the child done in but, of course, there is no evidence for that at all. From that time on Queen Min was the dominant lady at court and her position only further strengthened. Far from remaining in the background, she was more of a partner, with her husband, in ruling Korea. In fact, it seemed to many she was more interested in state and world affairs than he was.

During this time the Kingdom of Korea was still maintaining a policy of isolation and had already greatly offended the Japanese by turning away their envoys sent to establish formal diplomatic relations. In fact, had Japan been prepared, there may have been war much sooner. In any event, Japan later sent a powerful naval force to compel Korea to open her ports to them, in much the same way Commodore Perry of the United States had done to Japan. Rather than risk war the Korean government agreed to trade with Japan and allow Japanese persons to buy land in Korea, though many were still nervous about having anything, whatever, to do with the outside world. Tensions, however, only increased as Japan was already more advanced than Korea and the local merchants were unable to compete with the Japanese which hurt the Korean economy. 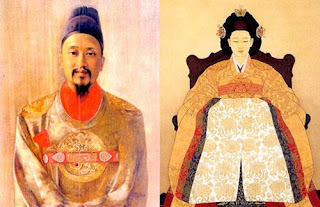 Like many, Queen Min was shocked to learn how far Japan had raced ahead of them. Koreans were quite proud of past victories in which they repelled Japanese attacks but now there was no denying that Japan had completely surpassed them. Queen Min knew Korea would have to tread carefully and she favored a plan by which Korea would continue to deal with Japan in order to modernize and, once that was sufficiently completed, would then ally with the United States or some other or more western powers to drive the Japanese influence out of Korea. Conservatives at court rejected this idea and regarded the Japanese and the western powers alike as being too dangerous to deal with at all. However, the Queen was determined to see Korea modernized and, after another fact-finding mission to Japan in 1881, she began to reorganize the Korean government herself. Special attention was given to dealing with Japan, China and Russia, studying western technology, modernizing the military and studying western economic models. Of course, the establishment opposed these efforts in every area and there was even an attempt to overthrow Queen Min, but she found out about it and was able to suppress it quickly.

In 1882 there was a more serious mutiny by elements of the army resentful of the special status of the new, modern military units and they attacked areas associated with the Queen’s family and killed many of her friends and allies. The old regent even came out to take charge of the rebellion which was aimed almost solely at the Queen. The rebels grew in strength and finally King Gojong and Queen Min were forced to flee the palace and go into hiding with the Daewongun taking control of the government and quickly issuing orders ending all of the modernization programs and reasserting the policy of isolationism. This prompted the Qing Empire to dispatch Chinese troops to Korea (which they still viewed as within their traditional sphere of influence). They arrested the former regent, bringing him back to Peking for trial and restored the King and Queen who promptly retracted the retractions enacted in their absence. In the aftermath, King Gojong signed a new agreement with Japan and when Queen Min learned of this she quickly tried to strengthen ties with China as a way of off-setting Japanese influence in an effort to ensure that no one power gained dominance over Korea. She also sought relations with the United States in an effort to advance Korean industry, hoping to surpass Japan. 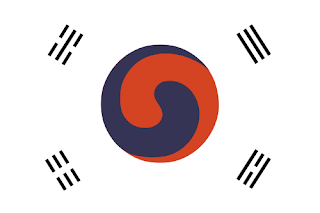 As this balancing act was maintained, the King and Queen grew closer together. Korea began to industrialize and modernize but the international situation remained tense. In 1894-95 the First Sino-Japanese was fought, largely in Korea, in which the Japanese ejected the Chinese from the Korean peninsula. With the Japanese ascendancy came a plot against the Queen who, on October 8, 1895, was assassinated at Gyeongbokgung Palace by Japanese agents after overcoming the palace guard. In the aftermath the King, and their son Crown Prince Sunjong, had to take shelter in the Russian legation. Later, Gojong tried to assert independence by proclaiming himself Emperor of the Korean Empire (hence the Queen being known as Empress Myeongseong). The court drew closer to Russia to offset the influence of Japan but this came to an end with the shocking defeat of Russia in the Russo-Japanese War after which Korea became fully integrated into the Empire of Japan in 1910. However, to the very last, the example and the tragic death of Empress Myeongseong inspired her people to resistance and to fight for their independence. She remains an honored, if somewhat controversial figure, in Korea to this day.
Posted by MadMonarchist at 12:53 AM