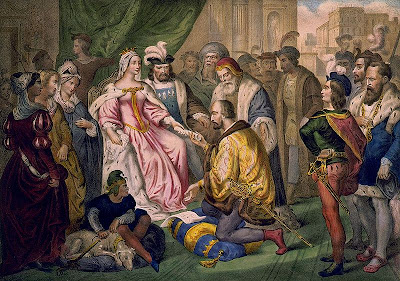 Today is Columbus Day, one of the few federal holidays I support, marking the day that the intrepid explorer Christopher Columbus “discovered” the New World on his mission to what was supposed to be India or the Far East dispatched by the Catholic Monarchs King Ferdinand of Aragon and Queen Isabella of Castile. Yet, as we have discussed before, this is still a controversial holiday. Native Americans take the opportunity to protest and draw attention to their long history of misfortunes, heaping all of the blame on the head of the late, ambitious navigator. As most readers will know I have a great affinity for the American Indian, a great deal of sympathy for them and share ancestry with a number of them. However, to blame all the evils of European colonialism in the Americas on Christopher Columbus seems quite absurd to me. As I see it, that would be rather like blaming every traffic accident in the history of the world on the man who invented the internal combustion engine. I would prefer Native Americans seize on some other day as a shared holiday of their own, though admittedly I have no idea of when this could be. The various nations have relatively little in common other than their shared history of mistreatment and seizing on some victory by one group or the other, such as the battle of the Little Big Horn for instance, might be seen as being in bad taste to some people.

So, American Indians protest on Columbus Day, an occasion not many other people seem to care a great deal about. In North America much was made of the fact that Columbus was not the first European to “discover” America (though I don’t know why as we have always known that to be the case) and in Latin America whereas once it was considered a pretty ‘big deal’ (it is known as La Dia de la Raza) as the start of Hispanic culture in the New World but these days most would rather emphasize their native ancestry rather than their Spanish blood, partly I think to help in claiming victim status. The Catholic Church in America, particularly the Knights of Columbus were instrumental in getting the holiday on the calendar but, in recent times, even they have slacked off of emphasizing it, preferring to take the symbolic side of the poor, blighted native or, more the case these days, the poor illegal immigrant. So, who is left to celebrate Columbus Day in the United States and to try to counteract the protests? The Italian-American community, both because of their just pride in the historic deed of Columbus and because there is really no other similarly well-known figure Italian-Americans can seize on to celebrate their people. Mexicans have the Fifth of May, Irish-Americans have St Patrick’s Day, German-Americans have Oktoberfest and Italian-Americans have Columbus Day.

When it comes to exploration much praise is given to the Portuguese, and rightly so as they were the trailblazers in the discovery of the Cape of Good Hope and the eastern route to India. Praise is often also given to Spain but the Italian people deserve their share of credit as many of the navigators commanding those Spanish ships were Italians and their ranks include a number of important explorers even if not everyone has heard of them. To start with, obviously, there was Christopher Columbus who, although he was not the first European to “discover” America, it was his discovery, frankly, that mattered. It started the great race of European nations to colonize America and originally this included Spain, Portugal, France, England, the Netherlands, Sweden and others associated with them. Some dispute where Columbus was born but the accepted time and place was 1451 in the Republic of Genoa (one of those pre-revolutionary republics where the Doge wore ermine robes and a crown). I do not see how it is appropriate for anyone to moan and groan about Columbus. Without him, none of us (people in the Americas other than the pure-blood native Indians of which there are precious few) would be here.

Another was Amerigo Vespucci, born in 1454 in the Republic of Florence, who was a navigator, cartographer and who traveled with a number of Portuguese expeditions at the invitation of King Manuel I and to whom we owe the name of “America”. Another was Alessandro Malaspina, a native of Mulazzo, Italy who joined the Royal Spanish Navy and explored and mapped most of the west coast of the Americas from Cape Horn to Alaska. There was Giovanni da Verrazzano who probably came from Florence and who was employed by the King of France and was the first European since the legendary voyages of the Vikings to explore the North Atlantic coasts of New England and Canada. He later made southern voyages of exploration in the Caribbean. Another is one many may know but they may not know he was an Italian and that is John Cabot whose real name was Giovanni Caboto. His birthplace has been speculated as being either Genoa or Gaeta but by nationality he was of the Republic of Venice and is credited with being the first European since the Vikings to set foot on North American soil, at Newfoundland according to Great Britain and Canada. Finally there is one of my favorites, a native of Venice, Marco Polo who opened up trade with China and befriended the great Mongol Emperor Kublai Khan.

So, remain positive I say and a happy Columbus Day to all.
MM
Posted by MadMonarchist at 9:27 AM