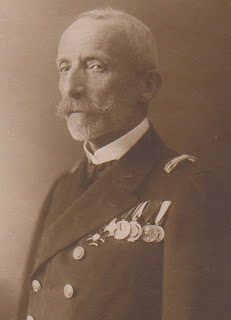 Archduke Charles Stephen of Austria, one of those ‘monarchs who might have been’ of the First World War, was born on September 5, 1860 in what is now the Czech Republic. His parents were the Archduke Charles Ferdinand (son of the famous Duke of Teschen who so bedeviled Napoleon) and Archduchess Elisabeth Franziska, Princess of Hungary and Bohemia. Despite being born in a very land-locked region Archduke Charles Stephen took an early and avid interest in the sea. In 1879 he was commissioned as an officer-cadet in the Imperial-Royal Navy, starting what would be a very long and distinguished naval career. In 1886, at the Hofburg, he married Archduchess Maria Theresia, Princess of Tuscany by whom, over the years, he had six children. In 1896 he retired from active service in the navy but continued to hold rank and undertake special duties for the navy. In 1901 he was raised to the rank of admiral and in 1911 was appointed Grand Admiral and Inspector of the Imperial-Royal Navy, making him the highest ranking naval officer of Austria-Hungary though others held operational command. The Archduke was also a yachting enthusiast, owned several vessels and visiting England a number of times for yachting events.

During World War I, after German and Austrian forces drove the Russians out of Poland, the German and Austrian Kaisers agreed to the creation of a new Kingdom of Poland in 1916. There were many Poles in the Austro-Hungarian forces and some independence activists worked with the Germans and Austrians to see this new state created (others opposed both the Russians and the Central Powers). Exactly who would become the new King of Poland was never finally decided. However, one of the leading candidates was Archduke Charles Stephen. According to some reports he was chosen as regent as a prelude to becoming king but others dispute this. The Germans had plans to make independent or semi-independent monarchies in Finland and the Baltic with German royals leading them. There were also reports that Emperor Charles I of Austria-Hungary wanted to be King of Poland in a sort of personal union with the rest of his dominions but the Germans and many Hungarians opposed this measure. There were also disputes over German desires for territory and questions about whether the new state would include ethnically Polish areas of Austria-Hungary.

Despite these difficulties, Archduke Charles Stephen had many factors in his favor that could have made him a successful King of Poland. He lived in the Polish area of Austria-Hungary (Galicia) and spoke Polish fluently. His daughters had married into the Polish aristocracy and his son, Archduke Charles Albert, was very close to the Polish people and, in later years, would join the Polish army and fight to defend the country during World War II. However, some opposed the idea of a Kingdom of Poland altogether, preferring to partition the former Russian territory between Germany and Austria or simply Germany with members of the Bavarian and Saxon Royal Families expressing an interest in claiming the Polish crown. Yet, Archduke Charles Stephen has been most associated with the idea of a Kingdom of Poland during World War I because probably no other candidate was as close to the Polish people as he was. However, very little progress was made and that was painfully slow. A provisional government was established with a ruling council but Germany and Austria-Hungary never agreed on the details of the Kingdom of Poland and the main Polish exile group in France opposed any effort to establish a monarchy allied with the Central Powers.

Some newspapers of the period spoke of Archduke Charles Stephen as the only serious candidate and that it was only a matter of time before he became King of Poland. However, the German military became increasingly annoyed with the issue and less tolerant of Austrian ideas as the Austro-Hungarian war effort became weaker and weaker. It also did not help that the Archduke’s own in-laws continued to support the cause of Russia or that his son, Archduke Wilhelm, became a champion of the cause of Ukrainian independence as there were long-standing territorial disputes between Poland and the Ukraine. In the end, the efforts came to nothing and would have been in vain in any event as it is unthinkable that the victorious Allies would have allowed a Kingdom of Poland with an Austrian or German monarch to continue to exist.

With Austria-Hungary carved up into successor states and the Hapsburgs sent into exile, Archduke Charles Stephen remained as attached to the Polish people as he always had been. He remained on his home estate, with his wife, in what became the Republic of Poland and he supported the new state even if he did not consider it ideal. He died there in 1933, followed by his wife only a month later.
Posted by MadMonarchist at 12:22 AM