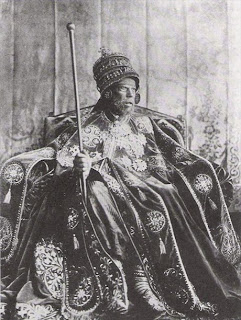 Emperor Menelik II of Ethiopia is a member of an elite minority group, standing alongside the likes of the great Chief Sitting Bull of the Lakota Sioux and King Cetshwayo of the Zulu as one of the native leaders whose forces won a great victory over a modern European army. His importance to the survival and emergence of the Empire of Ethiopia would be hard to overstate. He was born Sahle Maryam on August 17, 1844 to King Haile Melekot of Shewa. His father made him heir to his throne but after the death of Haile Melekot he was taken prisoner by Emperor Tewodros II when he conquered the Kingdom of Shewa. Prince Sahle Maryam was well treated until a rebellion flared up in Shewa and after a great deal of fighting in Shewa between various factions Prince Sahle Maryam escaped and claimed the throne of his father. The people rallied to his side and he proclaimed himself King Menelik of Shewa and even asserted a claim on the imperial title though he took no action to press it. He had plenty of more immediate concerns with a number of rebellions and intrigues to deal with, which was not uncommon for the time and place.

When Yohannes IV became Emperor he recognized Menelik as rightful King of Shewa after Menelik formally submitted to him as emperor on March 20, 1878. This proved to be the right decision as Emperor Yohannes IV lavished gifts on Menelik, including modern European weaponry which greatly helped secure his own position. When the Emperor was killed at the battle of Gallabat on March 10, 1889 he named his son as his heir just before his death but Menelik himself claimed the imperial title, arguing that his own descent from the sacred bloodline of King Solomon of Israel and the Queen of Sheba was in the male line whereas that of Yohannes IV (and thus his son) had been in the female line. Menelik won out with most of the nobility going over to his side and on November 3, 1889 at the Church of Mary on Mount Entoto the Bishop of Shewa formally crowned him Menelik II, “King of kings” of Ethiopia. He did not have long to wait before confronting the biggest crisis of his reign and it related to an earlier issue many have since seen as an error on his part.

On March 2, 1889 Menelik, while still fighting for his throne, had signed the treaty of Wuchale with the Kingdom of Italy acknowledging Eritrea as an Italian colony. A problem in translation, however, led to a dispute over part of the treaty. Menelik II had understood that the Italians have offered him their assistance should he ever need to call on them. The Italians, on the other hand, had written this in a more authoritative way, claiming Ethiopia as a protectorate. When this was made clear to Emperor Menelik II he quickly disavowed the treaty saying that he never had any intention, nor did he at the time have the uncontested right, to make Ethiopia a protectorate of Italy. At this time the liberal nationalists in control of the newly unified Kingdom of Italy were anxious to assert their status as a major power and join the club of colonial nations. Menelik II disavowing the treaty was all the reason Rome needed to declare war and an invasion force was quickly organized in Eritrea to begin a campaign to bring Ethiopia firmly under Italian rule.

The Italians won a number of early victories which caused their confidence to soar and this overconfidence prompted them to make a number of costly mistakes. Emperor Menelik was disturbed by the Italian successes and called upon the French for help, however, they were content to let Italy have a free hand in Ethiopia in return for French control of Tunisia. Oddly enough the only European power to sympathize with Ethiopia was the Russian Empire. Determined to fight on alone the Emperor took great care in securing the allegiance of the powerful nobles of Ethiopia and he had long been working to arm as much of his army with the most modern weapons possible. The Italians expected many of the nobles to join them out of self-interest but this did not happen. The Emperor had taken care that these men were loyal to him and neutralized those whose loyalty was suspect. Furthermore, the Italians were not expecting the Ethiopians to be so well armed or organized as they were.

Emperor Menelik II rallied a massive army and Ethiopian forces surprised the world by inflicting some minor defeats on the Italians which prompted the government of Francesco Crispi to order a final, climactic confrontation. The result was the battle of Adowa fought on March 1, 1896. The Emperor brought roughly 100,000 warriors to the field to meet an Italian army of some 17,800. The Italians were much better armed but the odds against them proved insurmountable. While the Ethiopians fought tenaciously the Italian commander lost his nerve and by mid-day the Italian army was in full retreat. Emperor Menelik II and the country of Ethiopia was suddenly thrust into international fame by their astounding feat. People across the world who had never heard of Ethiopia were suddenly aware that these overlooked African people, led by their Emperor, had defeated a modern European army. In the aftermath Ethiopian independence was recognized and Britain and France both paid their respects and established diplomatic relations with Menelik II.

This whole episode taught the Emperor a valuable lesson and though he was eager to establish friendly relations with neighboring powers, he was always very guarded about his sovereignty and the rights of his country. This, at times, hindered his genuine desire to provide the benefits of modernity to his people but after all he had been through, the Emperor on occasion considered the risks too great. He was a very inspiration leader to his people, particularly in times of crisis, be it war or famine, and he took the first steps toward establishing a modern administration for the country by forming an advisory cabinet to assist him in governing. Menelik II was married and divorced twice before marrying his final wife Taytu Betul who saw him through his declining years, holding power on his behalf when he became unable to do so. Emperor Menelik II died on December 12, 1913 revered by his people and respected around the world. Much of the credit for the creation of modern Ethiopia and the preservation of their independence is due to him.
Posted by MadMonarchist at 12:25 AM