A Queen's Soldier at Gettysburg 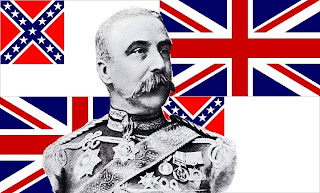 It was on this day in 1863 that the epic battle of Gettysburg, the largest battle ever fought in the western hemisphere and the bloodiest battle in American history, ended in victory for the northern United States and defeat for the southern Confederacy after the gallantly tragic “Picket’s Charge”. There were a number of foreign military officers present to observe that battle but, thanks to Hollywood, probably none are as famous as Lt. Colonel Arthur J. Fremantle of the elite Coldstream Guards regiment of the British army. Like many of his background Fremantle was disposed to sympathize with the southern states, which retained a more “old world” atmosphere and he wanted to witness the historic events of the war first-hand.

Traveling in an unofficial capacity he avoided the Union blockade by landing in Matamoros, Mexico and traveling through Texas. While there he met General “Prince John” Magruder who would go on to serve in the army of Emperor Maximilian of Mexico after the war. Colonel Fremantle was surprised by how widespread the support for his homeland was in the Confederacy. Many times as he dined with Confederate officers and officials his hosts would offer toasts to Queen Victoria and the British Empire. Upon meeting with General Joseph E. Johnston (second most senior general in the southern army) the Virginian informed him that the Confederates would be much happier under Queen Victoria than U.S. President Lincoln. Fremantle records Johnston’s exact words, "I can assure you, Colonel, that nine out of ten in the South would sooner become subjects of Queen Victoria than return to the Union."

Of course, the Confederate States had always been anxious to win recognition from Europe and the British particularly as the Royal Navy could have been of immense benefit in lifting the blockade of the southern coast. Despite being an unofficial observer, certainly no diplomat or government official, Confederate civilian and military leaders constantly tried to impress on Fremantle the benefits of an Anglo-Confederate alliance. Fremantle himself smiled at the prospect but his honesty forced him to admit that it was unlikely. Slavery was seen as distasteful in Britain by even some of the most ardent southern sympathizers and would prevent British recognition of the south until it was already an accomplished fact. While visiting Charleston, South Carolina, and meeting the ‘hero of Ft Sumter’ General Pierre G. T. Beauregard, Colonel Fremantle also made the point that Britain feared the U.S. would invade and conquer Canada if they recognized the south. The dapper Louisiana general assured Fremantle that with the blockade lifted southern armies could march swiftly into the northern states to threaten major cities that this would so occupy the northern armies as to make an invasion of Canada impossible.

When Fremantle reached the Confederate capital of Richmond the Secretary of State insisted that if Britain would only recognize their Confederacy the war would be ended immediately and peacefully. This was probably not entirely realistic nor could the security of Canada be absolutely guaranteed. Nonetheless, Fremantle was impressed by the friendly welcome he received and he was greatly impressed by what he saw of the Confederate forces in action. Like most he was very impressed with General Robert E. Lee and could not help but note that he was a descendant of the English nation and a member of the Church of England. His southern sympathies were only encouraged when he left the south and traveled through the northern states to New York where he witnessed the infamous “Draft Riots” with soldiers shooting down crowds of civilians in the streets and Black Americans being lynched by angry mobs.

The British colonel was thus very happy to board a ship back to Great Britain where he went on to a long and illustrious military career. His tour of the south made him admire the skill and determination of the Confederates, civil and military, and he predicted that the Confederacy must emerge victorious from the war. However, he was an honest observer and did not hesitate to mention spectacles which he found very disagreeable such as the sight of a slave auction in progress. Although sympathetic toward the Confederacy he was a fair-minded and impartial observer in a conflict that was to have immense repercussions. The general cause of monarchy was effected by the outcome, directly and indirectly. The defeat of the Confederacy spelled certain doom for the struggling Empire of Mexico and the rise of a re-United States as a major world power, inclined toward republicanism and often prejudiced against monarchy would mean many changes in the future as the New World came to play an ever larger role in the Old.
Posted by MadMonarchist at 1:17 AM