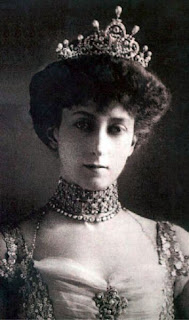 Queen Maud of Wales, the first Queen consort of the modern Kingdom of Norway, was born in London on November 26, 1869 to the Prince and Princess of Wales, later King Edward VII and Queen Alexandra of Great Britain. Through her mother, Princess Alexandra of Denmark, she already had connections with Scandinavia and in time should would play a central part in the affairs of that region of Europe. It was while she was attending engagements with her mother’s family in Denmark that she first met her cousin Prince Carl of Denmark, son of King Frederick VIII. A romance developed and on July 22, 1896 the two were married at Buckingham Palace before moving to Copenhagen though their only child, Prince Alexander (future King Olav V), was also born in Britain, in Norfolk, England, on July 2, 1903.

When Norway decided to end the personal union with the Kingdom of Sweden, which had existed since the Napoleonic era when Norway was given to Sweden as compensation for ceding of Finland to Russia, it was decided that the country would be a constitutional monarchy and the search began for a suitable candidate for the Norwegian throne. Of course, Prince Carl was ultimately chosen and part of why the Norwegian government thought him ideally suited for the role was Princess Maud. The connections with Denmark were very ancient but Princess Maud also brought the added bonus of ties with the powerful British Empire which could only benefit Norway. With the choice made and the separation from Sweden finalized Prince Carl became King Haakon VII of Norway and Princess Maud became the first Queen consort.

The couple arrived in their new country on November 25, 1905 and were crowned in Nidaros Cathedral the following summer. Queen Maud quickly became a popular favorite with the Norwegian people for her regal bearing, friendly smile and being ever dressed to perfection. Although today some might remember her more for her high style and fashion, she was actually much more but had a reserved and rather bashful nature that ensured much of her work was done out of the public eye. Behind closed doors she was a very warm and energetic person who was patron of a number of charitable causes such as establishing her own fund to help the victims of the First World War. Children and animals also received much of her attention.

Although her British connections had recommended her, Queen Maud made a determined effort after becoming Queen to be thoroughly Norwegian. She made an effort to learn the language, though it was very difficult for her and she never became fluent, learned to ski and saw to it that her son, now named Crown Prince Olav, was absolutely Norwegian and nothing else. Still, as is only natural, she tried to maintain some reminders of her English home in her new country as well. In her spare time she loved the outdoors and could often be found riding horses, walking her dogs and skiing. Her last public visit to England was to attend the coronation of her nephew King George VI in 1937.

The following year Queen Maud died while in London on November 20, 1938. She was taken back to Norway and buried in the Royal Mausoleum at Akershus Castle. The first monarchs of an imported royal family always have a difficult task and many are not ultimately successful but Queen Maud is a case of it working out very well. The monarchy is still going strong there and she set the standard for other royal consorts in Norway to follow. He ties to Great Britain were a comfort as Norway was entering the world stage as a newly independent country and the bonds survived her to be especially important during World War II when Norway faced its greatest crisis but could count on a close and cooperative partnership with Great Britain.
Posted by MadMonarchist at 1:05 AM