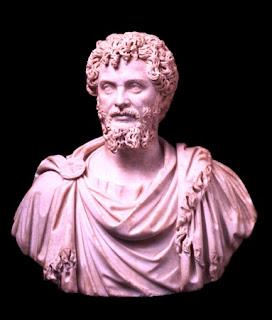 The future Emperor Septimius Severus, who would be the first Emperor of Rome of African origins, was born Lucius Septimius Severus on the coast of what is now Libya on April 11, 145 AD to Publius Septimius Geta. His family was a provincial one with no immediate relatives holding very high positions and Severus grew up to marry a local girl. He showed talent fairly early on and when he first came to Rome at the age of 18 the Emperor Marcus Aurelius appointed him senator. Other offices came after, helped in part by the commander of the Praetorian Guard who was also from North Africa. He was serving as governor of Upper Pannonia (the general area of modern Austria) when word reached him of the death of the Emperor Commodus and his hour of destiny was upon him.

Two other emperors rose and fell while the Danube legions hailed Septimius Severus as emperor and he marched on Rome. Most came to his side or at least made way for him and when he arrived at the Eternal City the senate quickly recognized which way the wind was blowing and formally bestowed the offices and powers of Emperor of Rome on him in 193. He executed all those who had been involved in the murder of Emperor Pertinax (the successor of Commodus) and the rest were evicted from Rome. In this way he was able to rid himself of the questionable loyalties of the Praetorian Guard and replace them with soldiers he knew he could count on. The following year he marched against Syria where the eastern legions had proclaimed a rival emperor. He dealt with them swiftly and forcefully, smashed them and then in 195 led a punitive expedition against the Parthians for their support of the Syrian governor who had opposed him.

The Emperor was then free to move against his next most serious opposition which came from Clodius Albinus, ironically also from North Africa, who was the governor of Britain. Severus had named him “Caesar” to get him on side during the Syrian rebellion but once that was suppressed he named the seven-year-old boy Caracalla “Caesar” and his future successor in a show of continuation from the Antonine dynasty. Albinus was less than impressed and invaded Gaul with 40,000 men based around the three British legions. Once his war was underway the Germania legion in Spain also declared in support of him. While Septimius Severus was in Rome securing his throne and dealing with legislative issues Albinus continued his rampage, made Lyons his headquarters and came close to taking the Rhineland throughout 196.

By the next year Severus was prepared to respond and marched his legions into Gaul where he met Albinus outside Lyons on February 19, 197. The fighting was fierce and at one point Severus thought defeat was certain and stripped himself of any outward signs of his rank. However, just in time, his cavalry came charging to the rescue, turned the tide and utterly defeated Albinus who shortly thereafter killed himself rather than be captured. Severus showed no mercy to his defeated rival, disgracing his body, sending his head to Rome as a trophy and throwing the corpse into the river along with his wife and children. This is not surprising as Severus had a reputation for being a zealous monarch, not highly educated but certainly intelligent, very generous towards his friends (never forgetting a favor) but ruthless to enemies.

He showed as little mercy to his political enemies back in Rome, systematically eradicating anyone linked to the rebel forces. Because of this the senate feared and distrusted him. The army, on the other hand, adored him as he allowed them much greater freedom (giving them the right to marry and have families), raised their pay and improved their standard of living. He held lavish celebrations to win over the populace but he was soon off to war again with Rome’s longtime rival in the east; the Parthians. He ultimately fought two wars against them following Parthian interference in the affairs of Roman-allied states along the border. The first resulted in a loss of territory which became a Roman province but the second was more thorough and Septimius Severus captured the Parthian capital and absorbed Mesopotamia into the empire. The victory was crushing, total and severe.

After this victory the Emperor went on a little sight-seeing tour, going to Egypt to visit the tomb of Alexander the Great and the pyramids. His age was beginning to show and sickness becoming more frequent yet he could not take life easy. Some years after returning to Rome and devoting himself to civil legislation a group of centurions came forward with information that the commander of the Praetorian Guard, Gaius Fulvius Plautianus, was planning to kill the Emperor and his heir Caracalla to seize power for himself. Was the plot real or engineered? This has been debated ever since but it was especially alarming to Septimius Severus because Plautianus had been his close friend. He had even forced Caracalla to marry Plautianus’ daughter though he had no affection for the girl or her father. The result, in any event, was the swift execution of Plautianus and the exile of his daughter.

Caracalla was glad to be rid of both of them but it was a painful ordeal for the Emperor who, as his health continued to decline, had to watch the peace of Rome be upset by the growing feud between Caracalla and his brother Geta. Each had factions loyal to them, minor troubles were constant, and it seemed everyone in Rome was either for Geta or Caracalla. When trouble broke out in Britain Septimius Severus took the opportunity to bring both brothers with him as he set out on campaign once again with his legions. Yet, by this time the Emperor was so ill and riddled with gout that he had to be carried in a litter. To deal with the British problem Severus determined to start from scratch, reconquering the whole island. Geta was put in charge of the civil administration and Caracalla was dispatched across Hadrian’s Wall into Scotland with the army.

The campaign was going well when the long suffering Emperor Septimius Severus finally died at York on February 4, 211. Abandoning the conquest of Scotland, his sons cremated the Emperor and carried his ashes back to Rome for burial in the Mausoleum of Hadrian. The senate promptly voted him divine status. He was remembered as a great warrior, a generous and attentive friend but an unforgiving and merciless foe. He was tolerant, not overly sensitive of criticism, and as Cassius Dio said, “a man of few words, though of many ideas”. He left behind many monuments and magnificent buildings (few of which sadly remain) and the reputation of a strong and shrewd monarch. Herodian said of him, “No one had ever before been so successful in civil wars against rivals or in foreign wars against the barbarians. For eighteen years he ruled, before making way for his young sons to succeed, bequeathing to them greater wealth than any previous emperor and an invincible army”.
Posted by MadMonarchist at 12:28 AM