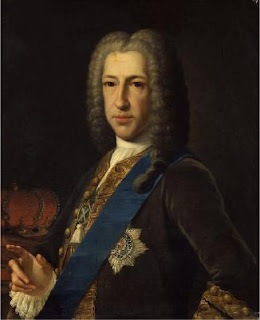 Ordinarily the birth of an heir to the throne is an occasion of great joy; the hope of stability and the future of a dynasty. However, the birth of Prince James Edward Francis Stuart, first son King James II of Britain and Queen Mary of Modena, brought about war, upheaval and the effective fall of a dynasty that had reigned in Britain since 1371. The prince, who would become known as “The Old Chevalier” and “The Old Pretender” was born at St James Palace on June 10, 1688 and was soon thereafter baptized into the Roman Catholic Church of his parents and this was the “problem” with the newborn prince. He represented the potential of a Catholic British dynasty and this was something that those with power in the country were not willing to tolerate. First, his legitimacy was called into question and the King even ordered a formal investigation to remove all doubt but it was all rather pointless. William of Orange soon landed with a Dutch army and the Protestant elites rushed to his banner. The Queen and Prince James were sent to safety in France while the King struggled (unsuccessfully) to maintain his throne.

The Prince was brought up in France and upon the death of his father in 1701 was recognized by British Jacobites as King James VIII of Scotland and III of England. The King of France, the King of Spain, the Pope and the little Italian Duchy of Modena also recognized him as the legitimate monarch of the ‘three kingdoms’. As a result of this he was declared a criminal by his half-sister and brother-in-law in London, King William III and Queen Mary II, who declared him a traitor the following year. As a boy ‘King James III’ had been prepared by his father for the one paramount goal of restoring the House of Stuart to the British throne and holding fast to their Catholic faith. Not all Jacobites were Catholic and some Protestant Tories pointed out to James that as William of Orange was not terribly popular he would greatly increase his chances of success in restoring the Stuarts if he would reject Catholicism and become an Anglican. This, he adamantly refused to do. His father had only become more religious during his years in exile and although James III made it clear he stood for religious toleration, he would never abandon the Catholic Church no matter how much it might benefit him politically.

In 1708 James III made his first effort to restore himself to the British throne and King Louis XIV of France made a major commitment to supporting him. James sailed from Dunkirk with a considerable French fleet and some 6,000 French troops however, the British Royal Navy (loyal to Queen Anne, successor of William III, daughter of James II and thus half-sister to James III) intercepted the fleet and hounded it all the way around Scotland and back to France. Still, he did not lose hope. When his sister Queen Anne died in 1714 the government had to go looking quite far to find a suitably Protestant prince to take the throne, finally settling on Prince George, Elector of Hanover. In the past Protestants had often stirred up xenophobic support by associating Catholicism with being “foreign” (unlike the homemade Church of England). Now, that same devotion to Protestantism had brought a rather reluctant distant German cousin to the throne in preference to the son of a born and bred British king.

James thought, with the fairly unpopular German King George I in power in London, the British public might be willing to rise in his favor if he could mount a comeback. However, it would not be easy. Only the year before France and Spain had been forced to make peace with the British and part of the peace was a British demand that James III be expelled from France (having him next door was too big a worry). In many ways it seemed like this was the last chance he would have to claim the throne of his father. In 1715 he wrote to the Earl of Mar who rallied the chieftains of the highland clans in Scotland and proclaimed James their king. They secured the highlands fairly quickly, occupied Perth and attracted an army of about 8,000 men. However, the Duke of Argyll opposed them and the government in London began arresting anyone whose loyalty was the least bit suspect which squashed potential risings in other parts of Britain before they could get off the ground.

Fighting raged off and on in Scotland to little effect. When James arrived at Peterhead via a French ship he found the rising going nowhere and he himself was suffering from illness and unable to take a decisive leadership role. The Jacobites were ultimately defeated and James was forced to retreat to Montrose where he boarded a ship bound for the continent; he had rolled the dice and lost. Back in Europe Pope Innocent XIII gave James a palace in Rome and a pension to support him while in Britain sparks of hope lingered. During “the ‘15” many Scots had opposed James III but in the aftermath the government crackdown in Scotland caused opposition to George of Hanover to grow and nostalgia for the Stuarts to increase. In 1719 Spain gave support to another effort at a Jacobite uprising but it failed as well.

That same year James III married Maria Clementina Sobieska, granddaughter of King John III of Poland by whom he would eventually have two sons; Charles and Henry. Like his father before him James spent his time in prayer and preparing his son and heir Charles to restore the Stuarts. In time this developed into the Jacobite uprising of 1745 when the young Prince Charles landed in Scotland after a storm scattered the French ships meant to support him and a worrisome King of France withdrew his promise of military support. Nonetheless, Charles raised the Stuart standard and proclaimed his father king once again. Most of the highland clans rallied to him, Edinburgh was occupied and a stunning victory was won at Prestonpans. Fortunes seemed to be turning.

This time the Jacobites marched south into England, reaching as far as Derby before the chieftains lost their nerve and turned back. The Jacobites won another victory at Falkirk but continued to retreat. In 1746 at the battle of Culloden they were decisively defeated and Prince Charles only narrowly escaped back to Europe. James was disheartened though he always held out at least some hope that the Stuarts could one day be restored. French plans for another restoration attempt in Ireland were made but never got far beyond the drawing board. The Old Pretender, King James VIII of Scotland and III of England to his loyal Jacobites, died in Rome on New Year’s day 1766. He was buried in the crypt at St Peter’s Basilica in Rome.
Posted by MadMonarchist at 12:32 AM