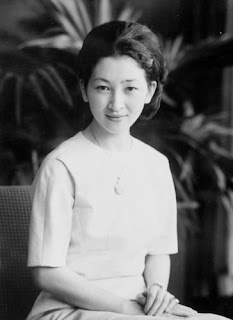 The current Empress consort of Japan has been a groundbreaking figure in many ways. She was the first commoner to ever marry into the Japanese Imperial Family and has easily been the most visible, prominent and widely traveled of any consort in Japanese history. Her life has not always been easy but she has proven to be exactly what Japan, in this day and age, expects of an empress consort. She was born on October 20, 1934 in Tokyo, the daughter of a wealthy industrialist and flour mill tycoon. Her education in Tokyo was interrupted by the American bombing campaign during World War II but she returned after the war was over and attended a prominent private Catholic school. Over the years this has been the focus of some trumped up controversy with rumors spread that the Empress is privately a Catholic.

She also started her higher education in a Catholic institution, graduating from Tokyo’s Sacred Heart University in 1957 with a literature degree. She later attended Harvard in the US and Oxford in the UK where, aside from her formal studies, she gained a good grasp of the English language. It has been alleged by certain writers that during this time there was an attempt to arrange a marriage between Michiko and the now famous reactionary writer Yukio Mishima. If so, nothing came of it and in August of 1957 she met the man who was to become her husband, the then Crown Prince Akihito of Japan at a tennis match in Karuizawa. The two hit it off and by the end of the next year the Imperial Household Agency formally approved and announced their engagement.

The marriage of a common-born girl, even a wealthy one, to the heir to the Chrysanthemum throne came as a great surprise to the Japanese public. Some hard-line traditionalists were outraged by the match but, considering all of the drastic changes Japan had recently been through, most took it as it came and soon came to love the pretty and intelligent young lady their crown prince had chosen. On April 10, 1959 the two were married, despite the rumored opposition of the Empress Kojun. This objection on the part of Michiko’s mother-in-law went rather extreme at one point, depending on who one chooses to believe, but it is all rumors as the Japanese monarchy has always been very good about keeping any private troubles private.

In 1960 the Imperial couple welcomed their fist child into the world, Prince Naruhito, ensuring the succession for the immediate future, followed by Prince Akishino in 1965 and Princess Nori in 1969. Contrary to established tradition, the Crown Princely couple insisted on raising their children themselves to try to establish a more close and warm family bond. In 1989 their status was raised with the passing of the Showa Emperor at which point Akihito and Michiko officially became the Emperor and Empress of Japan. It was an immense responsibility to undertake and the IHA even admitted that Empress Michiko was having some health issues related to stress.

In the following years ever since Empress Michiko has been a devoted mother and a great source of strength to the Emperor, going on almost all of his trips and foreign tours making her, by far, the most widely traveled consort in Japanese history. She has shown herself to be a remarkably strong woman, adjusting to the immense difficulties of imperial life and succeeding brilliantly, becoming a beloved member of the Imperial Family and setting an example of what the Japanese ideal for a wife and mother should be while at the same time being a more modern woman than past consorts, very well educated and as adept at discussing history and literature as she is expert at playing the piano. She remains a very busy Empress attending hundreds of meetings every year on charitable and cultural topics, visiting areas all across Japan and assisting her husband in his official receptions and religious duties.
Posted by MadMonarchist at 12:09 AM