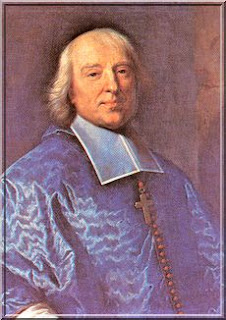 One of the most known religious defenders of monarchy, certainly in the Catholic Church, was the French bishop Jacques-Benigne Bossuet. Although he has to a large extent fallen out of favor today, mostly because of his staunch defense of absolute monarchy, he is still known for that which he was best known in his own time; as one of the greatest Christian orators of his era. He was born in Dijon on September 27, 1627 to a family of lawyers and judges. Given a proper Jesuit education he soon became fluent in Latin and Greek and developed a great love for Homer and Virgil as well as becoming a noted Biblical scholar. He entered the Church at a fairly early age and was guided toward the priesthood by none other than St Vincent de Paul and was ordained on March 18, 1652.

While living seven years in Metz he became known for his powerful sermons, his extensive study of the Bible and Church Fathers as well as holding fiery debates with Protestants. St Vincent de Paul finally prevailed upon him to move to Paris and devote himself to preaching as his oratory was considered his greatest gift. He was first consecrated as a bishop in 1670 but resigned from the post within a year and was elected to the French Academy and appointed preceptor to the Dauphin. Unlike other clerics at court he did not neglect his diocese or his numerous other duties while still tutoring the Dauphin, writing a number of works to prepare him to be a proper Christian monarch. He wrote the textbooks the Dauphin would on everything from kingship to philosophy to handwriting and held lessons three times a day.

Upon completion of this assignment he was appointed Bishop of Meaux in 1681. He took great care of his diocese and the people and religious communities there while never failing to give his usual powerful sermons, write and cross swords with the Jansenists and others. After 1700 his health began to fail but even as he lay on his deathbed he continued to teach, preach and argue by dictation until he finally passed away on April 12, 1704 in Paris. As Saint-Simon said, “he died fighting”. HM King Louis XIV had not originally favored bringing Bossuet to court but the oration he gave at the funeral of the Duchess of Orleans (as he had at the funeral of her mother Henrietta of France) the King summoned him without question.

Today he is often criticized as a Gallican (that is one who supported the King as the primary authority over the Church in France rather than the Pope). However, Bossuet was never a true Gallican, though he could at times sound like one. At the end of the day he was always adamant that the Catholic Church was universal, not divided along national lines, and under the ultimate earthly authority of the Pope alone. Though he is best known for stressing the divinely ordained nature of monarchy and the absolute power of kings, he was at times out of favor with Louis XIV as he did not hesitate to criticize the moral failings of the monarch. In the end the King would always have Bossuet back, typical of his overall relationship with the Church, pushing the limits as far as possible but never going so far as to break with Rome as King Henry VIII did in England.

Today Bishop Bossuet is still often regarded as one of, if not the, greatest preachers of all time. Yet, his stressing of the sacred nature of monarchy has caused him to be regarded as an embarrassment by many these days, particularly by that segment of the Catholic community which holds that the “Divine Right of Kings” was a totally Protestant innovation. However, as we have discussed here before, Bossuet stressed the difference between “absolute” and “arbitrary” power; it was all about the rule of law with Bossuet and his writings on this subject were all geared toward preparing the Dauphin to be the best Christian monarch he could be. Both the Church and society in general would be better off if they would take a second look at men like Bishop Bossuet and the things he taught.
Posted by MadMonarchist at 12:59 AM