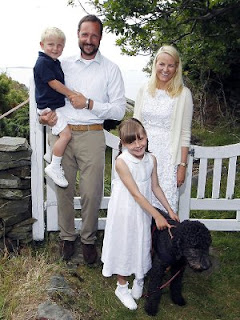 Scandinavia has had a busy royal week. Crown Princess Mette-Marit was in Vienna, Austria for a number of events aimed at combating AIDS, attending the UNAIDS conference and the Life Ball fund raiser for AIDS; the largest such event in Europe. Former U.S. President Bill Clinton was also at the event. The Crown Princess was the guest of honor at the Life Ball and since 2006 has been a special representative for UNAIDS. On Tuesday she was back home to celebrate the 37th birthday of her husband Crown Prince Haakon of Norway. As has become customary a photo-shoot was held to mark the occasion though the Crown Princess’ son by a previous relationship did not attend, being on holiday with his father.

As has been reported here already, on July 21 the Kingdom of Belgium celebrated its National Day marking 180 years of independence since King Leopold I was sworn in as the first King of the Belgians. All the royal family were in attendance for the major events, the King and Queen, Crown Prince and Princess, Prince Lorenz and Princess Astrid, Prince Laurent and Princess Claire and Dowager Queen Fabiola. Farther to the south in Monaco HSH Prince Albert II announced the official date for his marriage to Charlene Wittstock. The event will be held next year with the civil ceremony taking place on July 8 (presumably at the palace) and the religious ceremony taking place on July 9 (presumably at St Nicholas Cathedral).

In the Far East rumor has it that little Princess Aiko, daughter of Crown Prince Naruhito and Crown Princess Masako, will be sent to boarding school in either Australia or Switzerland after still dealing with nervous problems due to bullying at Gakushuin school which has been attending. Not surprisingly the Imperial Household has not made any statements on the subject. The new parliament in the Himalayan Kingdom of Bhutan recently passed a law against forced religious conversions, the wording of which is rather vague, and which the small Christian minority fear could lead to further restrictions against them and punishment if they so much as give aid to any of their Buddhist countrymen. Religious freedom is the law in Bhutan but the government has never given Christians official recognition and their worship is confined to their own homes. Most are Nepali converts.

On Thursday HM Queen Elizabeth II and Prince Philip attended the Garden Party at Buckingham Palace to recognize a varied and diverse group of individuals for their civic contributions. Earlier this week HRH the Prince of Wales and Duchess of Cornwall were in France to pay tribute to the fallen troops of the Commonwealth of Australia in World War I. The Governor-General of Australia was also on hand for the event. The Prince of Wales later paid tribute to the fallen soldiers of the former Empire of India. The Prince of Wales was apparently disturbed at the lack of recognition given to non-European forces in British Imperial service and wanted to highlight their contribution. More coverage and photos of these events can be found on the weblog of member The Radical Royalist.
Posted by MadMonarchist at 12:21 AM