Was the "Mad Baron" a Nazi? 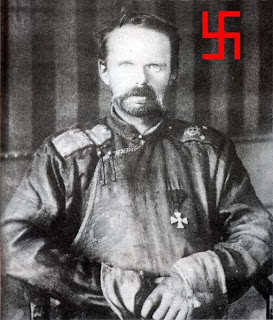 Wave the flag of anti-Semitism and a flag with a swastika on it and the first thing to come to mind is Hitler and the Nazi Party. With his rather unsavory reputation, accusations of anti-Semitism and the presence of the swastika symbol among his army many writers have been unable to resist the urge to link Baron Ungern von Sternberg with the Nazis and to portray him as a sort of proto-Hitler. Is there any truth at all to these allegations? As with most of the sensationalism surrounding this man the short answer is -no. However, let us take a look at this step by step.

First, there is anti-Semitism. I will say from the outset that the commonly held belief and the most widespread popular view is that the Baron was violently anti-Semitic. There is probably a reason for that, true or not. However, I will add, there are reports (in the minority but they do exist) that one of the Baron’s top subordinate commanders was Jewish, that he employed Jewish agents across the Far East and was not really anti-Semitic at all. That would seem slightly hard to believe but the fact remains that this is yet another “fact” about the Baron that is not as solid as is often believed.

However, even if we are to allow that the Baron was an anti-Semite, it would have to be kept in context with his time and place. He was coming out of the period of the late Russian Empire and the Civil War; an environment in which anti-Semitism was widespread. The White Russian movement, not entirely fairly, is well known for this today. However, it was not, unlike Hitler, racial in origin. It was based on the information they had (some accurate, some famously forged) about who the leading enemies of Tsarist Russia were. The infamous “Protocols of the Elders of Zion” may be held to be a forgery today, but it was widely believed at the time and while that work can be counted false there was a significant number of Jews involved in the anti-Tsarist, Bolshevik revolutionary movement. That does not justify blanket cruelty but it is important to understand where such hatred was coming from.

It must also be pointed out that, while you could find swastikas displayed among the ranks of the Baron’s motley army, it had absolutely nothing to do with anti-Semitism in any way. Although it never seems to matter regardless of how often it is pointed out, the swastika was a very common symbol, found all over the world, long before Hitler ever adopted it as his own and it is especially prevalent among the Buddhists of the Far East and Mongolia is no exception. Some have said the Baron had a swastika flag. This is possible, but I have never seen it. The only flags of the Baron forces I have seen was one bearing a large “U” and another bearing the Romanov crown and initial of Grand Duke Mikhail on one side and the face of Christ on the other. However, I have seen pieces of uniform, shoulder straps, from the Baron’s army which displayed the swastika. These were probably worn by the Mongolian troops as the various nationalities had distinct uniforms. When present the symbol was present as a Buddhist religious symbol and nothing more.

This leads to the biggest difference between the Baron and Hitler and the one that matters most because it has become the one most defining aspect of Hitler and the Nazi Party and that is racism. Plain and simply the Baron was as far from being a racist as is possible. Not only did he lack racial prejudice, he lacked ethnic or religious prejudice as well. He was a Baltic German whose loyalty was absolute an unquestioning concerning the predominately Slavic Russian Empire. He was raised a Lutheran amidst a majority of Russian Orthodox Christians and was as comfortable with them as he was with Tibetan Buddhists and Mongol animists. He admired Asian culture immensely, even when they had been the enemies of his country as was the case with the Japanese.

The Baron adopted Mongol dress, learned their language and even married a Chinese woman (Manchurian to be precise). His army included Russians, Mongols, Tibetans, Manchus, Japanese and others. In fact, his Russian soldiers sometimes complained that he favored the Mongol soldiers over those of his own race. The Baron had a vision, insanely horrific to some -but a vision all the same, and that vision was all that mattered to him, not differences of race or ethnic background which he would certainly have viewed as absurd and unimportant. He was also, quite unlike Hitler, not someone who sought power for himself. The primary goal in his life was to restore monarchies, which he did in Mongolia and hoped to do in China and Russia. He was always adamant that he was simply a military commander and that it was the Bogd Khan who ruled the country and had final say on all political matters.

To illustrate this difference, can anyone imagine Adolf Hitler bowing down before a half-blind Tibetan monk? Religious devotion was also another major difference even though some try to paint this as something the Baron had in common with the Nazis. Nothing could be farther from the truth. The Baron was an extremely religious man (though what that religion was has been at times debated) whereas Hitler was not. He could reference “Providence” in speeches when necessary and he indulged the occult obsessions of men like Himmler, but Hitler was not religious at all and never took even the neo-paganism pushed by some in the Nazi Party seriously. Hitler himself was the only god he recognized whereas the Baron viewed nothing as supremely significant as religion and monarchy; two things Hitler generally despised. Far from being the same or having much in common the two men were actually about as opposite as any two individuals could be.
Posted by MadMonarchist at 12:13 AM