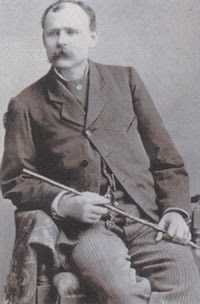 Benjamin Thompson, destined to become one of the most famous gunslingers of the old west, was born in England in 1842 and moved to Texas with his family in 1851. He attended a private school and when he was 15 took a job as a typesetter for an Austin newspaper. As he grew up he became handy with a six gun and a knife. While in New Orleans in 1860 he was taking a bus to work when a Frenchman started making nasty comments to a nearby girl. When Ben Thompson, full of English and Texan chivalry, ordered the man to stop harassing the girl the Frenchman punched him. That was all the provocation Ben needed and he quickly pulled a dagger and stabbed the Frenchman. He worked as a bindery in New Orleans and only a few weeks after the stabbing incident he shot a thief who had broken into his office. Wanting no more trouble he returned to Texas but trouble was never far from Ben Thompson.

In 1861 the War Between the States broke out and Ben joined up with the rough and rowdy Cavalry of the West in the Confederate army under the command of the famous Texas Ranger Colonel John S. RIP Ford. He fought at the southern victory at Galveston, Texas on January 1, 1863 and was later dispatched to the border to keep Confederate trade routes open to Mexico, but not before marrying his sweetheart Catherine Moore who he had known since childhood. In 1864 Thompson and some of his buddies were on leave in the wild border town of Laredo where he and his brother Billy Thompson were playing cards with a group of Mexican mercenaries. As often happens in card games an argument broke out which soon turned violent and Ben shot down two of the Mexicans. Once back with their regiment, Colonel Ford promoted Thompson to lieutenant and dispatched him to Austin to recruit more men for Confederate service. While in Austin Ben was arrested for shooting the local bully, a man named John Coombs. Because of the nature of the fight and his valuable service to the Confederacy Ben was quickly released.

When the war ended in 1865 with defeat for the Confederacy Texas was occupied by Union forces. They accused Lieutenant Thompson of shooting some Union troops near Austin. Seeing what justice he could expect from the federal authorities, Thompson decided to make a run for the border. Another war was going on in Mexico and many former Confederate soldiers were relocating there. Using his gift for persuasion Thompson bribed his federal guards and even took a couple of them along with him as he headed for Mexico. Once south of the Rio Grande Thompson joined up with the hard pressed army of the Mexican Emperor Maximilian. His previous service made him valuable and he was given the rank of major in the Imperial Mexican army. However, following the pullout of the French forces supporting him, Emperor Maximilian was soon overthrown by the forces of President Benito Juarez. Thompson, a foreigner in the service of an Emperor who Juarez quickly had shot, could count on facing a firing squad himself and was forced to leave Mexico and return to Texas.

Ben found himself still unwelcome by the occupying Union forces. Looking for any excuse to lock up the noted gunfighter, the federals arrested Ben for shooting the town bully John Coombs during the war. However, they could not change the facts of the matter and Thompson had acted in self defense so the court had no choice but to find him not-guilty and release him. Thompson finally settled down with his beloved wife in Austin where he shot his brother-in-law James Moore during an argument in 1868. Ben was sentenced to five years at hard labor in the notorious Texas prison at Huntsville. Two years later, in 1870, Thompson was pardoned and he teamed up with his friend Phil Coe and rode north to Abilene, Kansas. There the two opened up the Bull’s Head Saloon which soon became a thriving business. Unfortunately, Ben had not lost his inability to get along with lawmen and the friends from Texas ran afoul of the marshal of Abilene, none other than the deadly gunfighter Wild Bill Hickok.

Despite the tensions, Thompson was determined to make a fresh start in Abilene and with his business established and running well he sent for his family to come and join him. He met his wife and son in Kansas City but disaster struck when Catherine was thrown from the carriage when they hit a pothole. She had to have her arm amputated and more bad news came when, following her recovery and while on their way back to Texas Ben got word that Wild Bill had shot his friend Phil Coe. Ben packed up his marbles and moved to Ellsworth, Kansas with his brother Bill Thompson. Billy had fought with Ben in the Confederate army and was even more of a wild card than his brother. Trouble found the Thompson brothers on August 15, 1873 when Ben got into another fight over a card game. The argument turned into a fight which was taken to the street where the shooting began. In a typical wild west shootout Billy Thompson shot the local sheriff, Chauncey Whitney. The two men were arrested by another legendary gunfighter, Marshal Wyatt Earp, but luckily, the trial ruled that the shooting had been an accident and the Thompson brothers were released. Ben decided he had had enough of Kansas and returned to Texas and his old hometown of Austin.

On Christmas Day Ben was at the Capital Theater when the bartender and the manager picked a fight with him. One of the downsides about becoming a famous gunslinger is all the other folks who want to gain their fame by doing you in. Thompson shot both of them dead and was duly acquitted at his trial in 1877 because, once again, the shootings had been in self defense. After this incident Ben got itching feet again and moved back to Kansas where he wandered into the now famous little town of Dodge City where he became good friends with another legendary gunfighter, Bat Masterson. The Atchison, Topeka and Santa Fe Railroad hired Ben and Bat as mercenary gunmen during their feud with the Denver and Rio Grande Railroad over rights of passage through Royal Gorge, Colorado. For his services in this private, little war Ben was paid $5,000 which he used to open up a number of gambling parlors around the city of Austin. Soon, Ben became one of the most successful men in the Texas capital gaining wealth and political influence.

People admired and respected Ben Thompson, but it still must have seemed rather ironic to some when, on November 7, 1881, Ben was elected City Marshal of Austin, Texas. The man so long hounded by the law had finally become a lawman himself. Needless to say he was extremely successful. The crime rate in Austin hit an all time low as no one in their right mind wanted to tangle with the famous gunslinger Ben Thompson. He also kept up his private business, running the Iron Front Saloon gambling parlor which was very successful. He owned a grand mansion at 2009 University Avenue, and had a chauffeur. Because he and Catherine only had one son, and since he had more than he needed and was still a gallant English gentleman at heart, Ben took in orphans as well. It might have seemed strange for such a deadly gunfighter, but he and his handicapped wife loved children and were glad to house, provide for and raise as many as they could.

On July 11, 1882 Ben took some of his children on a little excursion to San Antonio. When a man named Jack Harris heard that Thompson was in town he decided to challenge him as Ben had thrashed a friend of his, Joe Foster, two years earlier in an argument over a card game. Harris and Foster were both partners in a local theater. Harris waited at the theater which Ben frequented for a chance to kill the marshal of Austin. Ben dropped his children off with friends and headed for the theater. As he approached the building Harris called out from a window for Ben to come inside where they could have it out but Ben never gave him the chance. Taking aim at the figure standing behind the Venetian blinds, Ben shot Harris dead right through the window. Once again Thompson was brought to trial but once again was found not-guilty. Harris had other friends though and they vowed to take revenge on Ben Thompson for the killing.

A few years later, on March 11, 1884, the famous deputy sheriff of Uvalde County, King Fisher, invited Ben to go to San Antonio for a little gambling. They came into town on the train at about eight in the evening and headed for the same variety vaudeville theater where Ben had killed Jack Harris. There he met up with Joe Foster, part owner, and the man whose altercation with Ben had first started the trouble with Harris. An argument ensued and Ben stuck his gun in the mouth of Joe Foster at one point. Billy Sim, another part owner, and one of their workers named Jacob Coy rushed to the scene and pulled their guns. In the ensuing shootout both Ben Thompson and King Fisher were shot dead; hit by more than twenty four bullets. It was later discovered that King Fisher had plotted with Foster to get Thompson into town to assassinate him but Fisher had been killed in the confusion.

When the body of Ben Thompson was returned to Austin for burial, his funeral was the largest in the history of the city up to that time with a procession of 62 vehicles following the hearse. He was buried in Oakwood Cemetery, mourned by his wife, son and the many adopted children they had taken and cared for as their own. That was the end of the gunslinger Benjamin Thompson; English immigrant, typesetter, binder, Confederate officer, Imperial Mexican officer, gunfighter, lawman, gambler, businessman and humanitarian family man. Amongst all those Texans of colorful life and background, his certainly stands out as one of the most colorful of all.
Posted by MadMonarchist at 12:58 AM