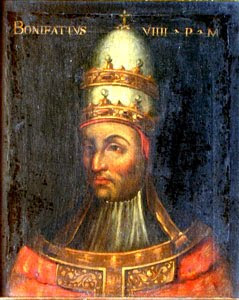 When considering some of the most controversial popes in Catholic history one name that invariably comes up is that of H.H. Pope Boniface VIII. This great pontiff has, perhaps unfortunately, perhaps not, had his entire pontificate overshadowed by a single papal bull, and particularly, only one final sentence out of that bull, however, that one sentence has made him public enemy #1 on the lists of many. One thing is certain, Boniface VIII was a rather 'plain talking' pope who was as far from the famously vague Vatican statements most today would be familiar with as is possible.

Boniface VIII was born Benedetto Caetani in Anagni around 1235. Like many pontiffs, he came from an aristocratic background, joined the priesthood and became a highly skilled canon lawyer. He was raised to the rank of cardinal and was elected to the Apostolic See on Christmas Eve, 1294 at the age of 59. His reign began immediately following an unprecedented event in Church history: the abdication of a Pope. In fact, due to his expertise in canon law, Cardinal Caetani had advised the pontiff in question, the reluctant Pope Celestine V, exactly how this could be done.
One of the first issues with which Boniface VIII had to deal was the problem of King Charles II of Sicily, who had so dominated Celestine V and caused many of his creatures to take high office. Pope Boniface VIII took firm measures, dismissing anyone from office whose first loyalty was not to Mother Holy Church. However, he still supported Charles in his efforts to regain Sicily, which had been seized by Santiago II of Aragon and was being ruled by the regency of his brother Frederick. The new Pope also went to great efforts to encourage art and learning. He was the first to have the Vatican library catalogued and reorganized the archives in addition to founding the University of Rome in 1303. He acted as patron to numerous artists and sculptors during his reign.
Still, he was to face many trials, first as a result of his dealings with Sicily, which earned him the wrath of the Colonna family. They attacked the legitimacy of Boniface's election by calling into question the legality of Celestine's abdication. The move can easily be proven to be nothing but politically motivated. The Colonna's supporters in the College of Cardinals had voted for Boniface and the new Pope had been the guest of the family at Zagarolo after he was crowned. This threat, and the fact that Celestine V had such a reputation for being easily influenced was enough for Pope Boniface to bring Celestine closer to Rome. The Colonnas reacted by stealing from the Pope and continuing to question his legitimacy in subtle and not-so-subtle ways. Ultimately, Boniface VIII excommunicated them and called for a crusade against the family, which was threatening the earthly head of the Church. They were defeated, but escaped to the protection of France in 1298.
This was the Pope's other major challenge: King Philip IV of France. Tensions first flared when the Pope tried to bring peace in the endless war between France and England, but the situation improved after Boniface VIII canonized King St Louis IX in 1297. However, Philip continued to levy heavy taxes against the Church in France and tried to make himself its ultimate ruler. Boniface naturally took action against this, and the two sides exchanged written decrees on papal and royal authority aimed against each other. This culminated in the Pope's 1302 bull Unam sanctam which included, at the end, this most famous and controversial line: "Therefore, We declare, affirm and define as a truth necessary for salvation that every human being is subject to the Roman pontiff". From this point, as far as Boniface VIII was concerned, 'Roma locuta est, causa finite est'.
However, the Pope's efforts at reconciliation were thwarted by the French minister Guillaume de Nogaret, who attacked the Pope using outrageous information supplied by the Colonna family. At Anagni, in September 1303 Minister de Nogaret and Don Sciarra Colonna came in person to demand the Pope's resignation and physically attacked him when he refused. However, the two came into conflict themselves, allowing the Pope to escape to Rome where he found out that a rescue operation had been in the works. The incident had badly shaken the Pope however, and he died on October 11 after reigning 8 years, 9 months and 19 days.
Posted by MadMonarchist at 12:14 AM