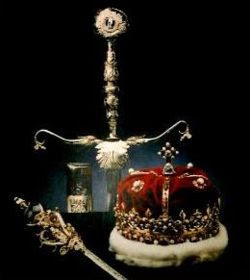 The royal regalia of Scotland includes the Crown of Scotland, the royal Sceptre and the Sword of State. The crown was created from an older version for James V King of Scots in 1540. It was used to crown all subsequent kings of Scotland until Charles II. After the overthrow of the British Monarchy by Oliver Cromwell the republican dictator intended to destroy the Scottish crown jewels just as he had the English, but some loyal Scots hid them away and thus they survived to crown Charles II. The royal sceptre was gift to James IV King of Scots by HH Pope Alexander VI in 1494. It includes numerous specifically Catholic Scottish symbols such as the Virgin Mary and St Andrew. The Sword of State was a gift to the same Scottish king by HH Pope Julius II in 1507 and displays images of Sts Peter and Paul. The Scottish royal regalia was displayed at the coronation of Queen Elizabeth II but not actually used. The items are kept in Edinburgh Castle in Scotland.

Posted by MadMonarchist at 1:08 AM