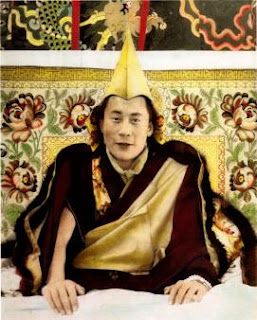 One of the most well known and admired figures in the world is His Holiness Tenzin Gyatso the XIV Dalai Lama of Tibet and yet relatively few people recognize him as an exiled monarch as well as a religious leader. He was born on July 6, 1935, the 4th of 16 children on the Tibetan frontier. When he was only two years old he was recognized as the reincarnation of the late XIII Dalai Lama. He was taken to the Potala Palace in the holy city of Lhasa and proclaimed the Dalai Lama, roughly translated as "Ocean of Wisdom", the bodhisattva of the Buddha of compassion. He was then renamed "Jetsun Jamphel Ngawang Lobsang Yeshe Tenzin Gyatso", titled "Holy Lord, Gentle Glory, Compassionate, Defender of the Faith, Ocean of Wisdom". Most refer to him as "Kundun" or "the presence".

He was raised in the traditional fashion for a Buddhist monk and trained for his role as the supreme temporal and religious leader of the theocratic Kingdom of Tibet. However, he was a very outgoing and curious child and like his predecessor was greatly interested in the outside world and never tired of learning as much as he could about it from the few foreigners to visit Tibet. However, that outside world was rushing toward the peaceful and isolated kingdom of Tibet in a brutal way with the onset of World War II and the resulting rise to power of the communists in China. As soon as they seized power the communists were intent on the swift conquest and assimilation of Tibet which had previously been an independent tributary of the Chinese Empire. Because of this crisis, and at the request of his people, in 1950 the teenage Dalai Lama was declared to have reached his majority early in order that he could be officially installed as the ruling sovereign of Tibet.

However, the coming contest would be extremely one-sided. The devout Buddhists of Tibet were a peaceful people with only a tiny army with virtually no modern weapons nor any idea of how to fight a modern, total, technological war. They were no match for the massive and recently victorious "People's Liberation Army" of Red China. They were also crippled by a lack of foreign support and treason from within. The Red Chinese occupied Tibet, slaughtering multitudes of people, sacking villages, looting temples and destroying religious icons. The Tibetans had put their faith in their religious and the spiritual strength of their "Living Buddha" but it was to no avail against the world's largest army. At first, the Chinese pretended to try to work with the Dalai Lama, inviting him to Beijing to be courted by the communist government. It almost worked but at the end of the visit Chairman Mao Zedong made his famous statement to the Dalai Lama that "all religion is poison". The young monarch knew it had all been a charade.

In 1959 the Tibetans rose up against their Red Chinese conquerors and the result was a great slaughter and increased rumors that the Reds would have the Dalai Lama killed. As a result, he was forced to disguise himself as a soldier and escape into exile in India where he has remained ever since. Over the years since that time the Dalai Lama has become a widely respected figure for his spiritual, social and political teachings. The Red Chinese continue to view him as a reactionary, a dangerous counterrevolutionary and disident leader in spite of the fact that he has only ever called for peaceful opposition and has even dropped his calls for independence and asks only for genuine autonomy for Tibet so that Tibetan culture and religion can be preserved. He also continues to teach extensively on the Gelugpa school of Buddhism. In recent years he has semi-retired from his political role with the Tibetan government-in-exile but admits that he could never truly abdicate his role as the Dalai Lama. The Red Chinese government continues to vilify him and to punish and threaten any government that deals with him.
Posted by MadMonarchist at 2:43 AM