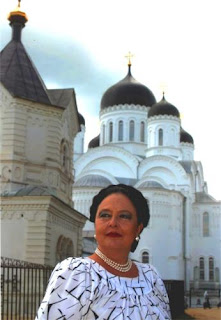 To an increasing degree ever since the fall of the horrid Soviet Union nostalgia has been growing around the Romanov dynasty. Peaks came on several occasions, particularly the reburial of the remains of Czar Nicholas II and his family as well as the canonization of the last Czar, Czarina and their family as martyrs for the Russian Orthodox Faith. This fascination has only increased lately with the upcoming 400th anniversary of the Romanov rise to power. However, what has lately been more remarkable than anything was the words of Alexander Belov of the Movement Against Illegal Immigration who stated that, not only are feelings growing warmer toward the Imperial Family but that there have actually been talks inside the Kremlin about the possibility of a Romanov restoration in a constitutional monarchy version of the Russian Empire.

HIH Grand Duchess Maria Vladimirovna has gained an ever higher profile and even many who would not actively support a monarchial restoration have come to the conclusion that such a thing would not be harmful. As Belov carefully put it, in a constitutional monarchy as is common in western Europe, monarchs are incapable of doing harm (due to their lack of political power) and can only be a help to the country and people of Russia. According to Belov such a plan is "in the works" with talks underway about ideas for a restored Russian Empire in which the Czar (or Czarina) would reign while the Prime Minister rules. This would probably be the best that can be immediately hoped for in Russia today as many have already said that the autocracy is back in all but name in the person of current PM Vladimir Putin. It is believed that he would be more open to a restoration in which he continues to hold the power he has held ever since becoming president. It would, however, require a firm break from the Soviet past which would no doubt be difficult for many, the former KGB agent Putin among them.

These "talks" may be exaggerated but it is at least exhilarating to kindle the embers of hope that there may be the slightest chance of a restoration of the Romanov dynasty. Of course, in the absence of the autocracy it would not be a total restoration, but it would be a *huge* step in the right direction and a major statement not just to Russia putting to rest the nightmare that was the Bolshevik Revolution but also to the entire world which followed the satanic communist example from Cuba to North Korea. If even a limited monarchy could be restored in Russia it would be a major shot in the arm to the cause of kings all around the world. After the horror that was the Russian Revolution, Civil War, Cold War and so on; the conclusion could be drawn that if a restoration of the Romanovs could happen in Russia a return to monarchy could happen anywhere. I hope, I wish, I pray that this will continue in the best way and that whatever it takes will happen to put a Romanov back on the Russian Imperial throne.

God Save the Czar!
Posted by MadMonarchist at 1:10 AM