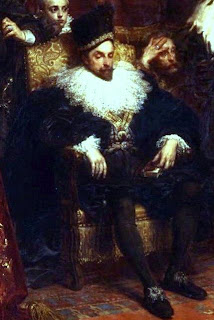 The reign of King Sigismund III of Poland is often spoken of as the beginning of the end of Polish greatness. In terms of worldly success he certainly met with many defeats and setbacks. Yet, he was also one of the great Catholic champions of Europe and his reign can also be seen as one of many opportunities for an even greater Poland had things gone just a little differently. He was also a man of principle who would follow the hard but upright path rather than compromise his values for a more sure chance at success. As a monarch who reigned during the Catholic Reformation (also called the counterreformation) he constantly worked to see the restoration of all of his subjects to the true faith embodied in the Church of Rome. Oddly enough for such a staunchly Catholic monarch his story begins in the staunchly Protestant Kingdom of Sweden.


Sigismund was born on June 20, 1566 to Katarzyna (Catherine) Jagiellonka and King John III of Sweden at Gripsholm. His parents, at the time, were being held prisoner by King Eric XIV but despite the Protestant domination of Sweden young Sigismund was raised as a Catholic. Regaining the throne of Sweden would be one of the primary driving forces in his life. His Polish connection came through his mother who was the daughter of Sigismund the Old and the Jagiellonka family had been the royal family of the Polish Lithuanian Commonwealth since King Wladyslaw II obtained the crown in 1386 through his Angevin wife. In 1587 Sigismund stood for election to the Polish throne after the death of King Stefan Batory. He was supported by Chancellor Jan Zamoyski, the dowager Queen Anna and the nobles loyal to the Zborowski family. With this network behind him he was duly elected King of the Polish Lithuanian Commonwealth on August 19, 1587 with the blessings of the primate of Poland Stanislaw Karnkowski. From that time his official name and title became Sigismund III, by the grace of God, king of Poland, grand duke of Lithuania, Ruthenia, Prussia, Masovia, Samogitia, Livonia and also hereditary king of the Swedes, Goths and Wends; the later titles being in reference to the claims of his father to the Swedish throne.


However, as was often the case with the Polish electoral monarchy, the outcome was strongly contested by the losers who backed the Emperor Maximilian III for King of Poland. Upon hearing of his election King Sigismund slipped through the clutches of the Protestants in Sweden and landed in Poland on October 7 and quickly agreed to give up some royal powers to the parliament of the commonwealth in the hope of wining over some of his enemies and settling the disputed election. He was proclaimed by the Lesser Prussian Treasurer Jan Dulski as king on behalf of the Crown Marshal Andrzej Opalinski and after journeying to Krakow he was crowned on December 27. It would have seemed that the issue of who would be King of Poland had been settled by Emperor Maximilian III invaded at the head of his army to claim his crown. Thankfully, hostilities did not last too long as hetman Jan Zamojski at the head of a Polish army loyal to King Sigismund met and defeated the Austrians at the battle of Byczyna and took Maximilian III prisoner. However, at the request of Pope Sixtus V, King Sigismund III released Maximilian who surrendered his claim to the Polish commonwealth in 1589. King Sigismund also tried to maintain peace with his powerful neighbor by marrying Archduchess Anna of Austria in 1592. His was always his intention to be allied with Catholic Austria against the Protestant forces that were tearing Christendom apart.


When his father died King Sigismund III requested from his parliament that he be allowed to claim his inheritance as the rightful King of Sweden. The Poles had no objection and when he promised to respect Lutheranism as the official religion of Sweden the Swedes went along with the idea as well and Sigismund was crowned King of Sweden in 1594. He appointed his uncle, Duke Charles, to rule as regent on his behalf in Sweden while he remained in Poland since the Swedes and the Commonwealth were not united politically but simply had a personal union by sharing one monarch. However, tensions grew quickly with Sweden as despite the legal guarantees, King Sigismund was a devout Catholic and this made the Swedes nervous. The Protestant firebrands warned that Sigismund had the ultimate goal of making Sweden Catholic again. As proof they pointed to the Union of Brest Sigismund set up in 1596 which brought many Eastern Orthodox into the Catholic fold and led to the modern day Ukrainian Catholic Church, to his friendship with Catholic Austria and his support for the Catholic Reformation, particularly the Jesuit order, which was spreading out to refute Protestantism and regain lost spiritual ground for Rome.


Combating heresy and giving Poland, long a politically chaotic country, a strong and stable government were the primary goals of King Sigismund. Toward this end he moved the royal palace from Krakow to Warsaw and oversaw the arrival of the Jesuits who set up many schools throughout Poland and became chaplains and confessors to many families. The Catholic Church in Poland rebounded strongly during the early years of the reign of King Sigismund III. Their preaching was very well received by the public and along with their staunch defense of the faith they also reminded Poles of their crucial role as the first line of defense for Catholic Christendom against the Russians and the Turks. However, trouble was never far away for King Sigismund and 1598 was a particularly painful year. His wife Anna died (he later married her sister Constance of Austria in 1605) and he saw the outbreak of rebellion in Sweden led by his own uncle and regent who portrayed himself as the Protestant champion of Sweden fighting against their Polish Catholic monarch. King Sigismund moved against him which a combined Swedish and Polish army. He won some early victories but the climax came at the battle of Stangebro in which his 8,000 strong army was defeated by the 12,000 men of Duke Charles. The Swedish loyalists were executed by the Protestant government and after the King returned to Poland he was declared deposed and his uncle was proclaimed King Charles IX of Sweden in 1600. A number of Swedish Polish wars resulted but the personal union was never to be recovered despite the many persistent efforts of King Sigismund.


Trouble was also plentiful on the southern border where Poland was drawn into the wars of local nobles and the Austrian Hapsburgs against the Muslim Tartars and Turks. King Sigismund was anxious to help Austria and was promised territorial gains for Poland in return for his assistance. He sent in a mercenary army fresh from the wars in Russia to Moldavia but in 1620 the Polish forces were defeated and Sigismund was forced to renounce his claim to the principality. It was a setback but resulted in a negotiated peace and was no stunning victory for the Muslims who had vowed to destroy the Polish Lithuanian Commonwealth and in this aim they certainly failed. Almost at the same time as these troubles, and those with Sweden, Sigismund was fighting a war with Russia. Those who remember the World War II era of Polish wars against Germany and Russia should set any preconceptions aside because in the time of the Polish-Lithuanian Commonwealth it was the Poles that were a force to be reckoned with, especially their elite heavy, winged, hussars. The Russians had been fighting amongst themselves and King Sigismund got involved, as did Sweden though they were never firmly on one side or the other. At one point the Russians invited the son of King Sigismund to become their Tsar but Sigismund would not allow it. He though he himself might become the master of Russia and though this did not happen the Polish-Lithuanian Commonwealth did win a number of victories and gained more territory. At one point Polish troops even captured Moscow as astounding as that might seem today. On the downside the whole conflict meant that any lasting union between the Commonwealth and Russia was out of the question.


Throughout all of these constant wars King Sigismund also tried to stabilize and streamline the Commonwealth government. The electoral monarchy in Poland had created a nobility with rather too extensive powers and a great deal of division. Sigismund worked to gain more power for the king as well as to allow government business to pass with a majority of votes of the parliament rather than unanimity which was extremely hard to achieve and men that things often did not get done. All these actions led to a rebellion but the King was ultimately victorious and despite what his many detractors might say his reign marked a period of Polish greatness the likes of which has not often been seen. He made the Commonwealth very much the dominant power of Eastern Europe and just as importantly ensured that Poland remained a solidly Catholic country in the face of Protestant incursions. He was a brave man, a talented monarch and something of a renaissance man as is evidenced by his devout faith and his artistic talent as a painter and goldsmith. Had things gone just a little bit different he might have been the father of a Catholic dynasty that stretched across Sweden, Poland-Lithuania, Moldavia and Russia. It did not happen, but that should not detract from his greatness as one of the royal champions of the Catholic Reformation period. King Sigismund III died on April 30, 1632 at the age of 65 in his castle at Warsaw and was succeeded by his son King Wladyslaw IV.
Posted by MadMonarchist at 12:32 AM