Birthday of a Blessed Emperor 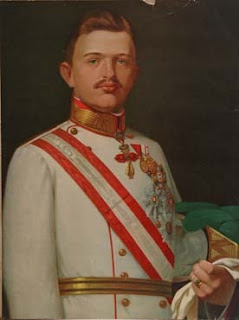 It was on this day in 1887 that HIRH Charles Francis Joseph Louis Hubert George Mary of Habsburg-Lothringen was born to Archduke Otto and Archduchess Maria Josepha in Lower Austria. At the time few probably imagined that he would one day become heir to the throne, much less that he would have the sad distinction of being the last Hapsburg Emperor from that ancient and widely respected dynasty. It is well enough that he had such a happy marriage and family life and that he was able to take such consolation in his deep Catholic faith for his life was a succession of tragedies from end to end. He is often relegated to a foot note in the history books dealing with the Great War, yet he should be praised and held up as an example for all others to follow for he was one of only a literal handful of European leaders who actually tried to end that disastrous and suicidal conflict peacefully. He inherited the thrones of Emperor of Austria and King of Hungary upon the death of the esteemed Emperor Francis Joseph but by 1918 the Dual Monarchy of Austria-Hungary was falling apart around him, he was deposed and forced into exile. Yet, Charles was a monarchists' monarch and he tried twice to regain his throne in Hungary as a prelude to a further restoration of the Hapsburg dominions but it was not to be. His greatness in terms of his honor, dignity, piety and devotion to duty is impossible to ignore and cannot be overstated. Thankfully, he is more well known now that he might have been for one man who did not forget him was the late Pope John Paul II who beatified him in 2004; pointing especially to his example of trying to stop the Great War peacefully.
Posted by MadMonarchist at 1:30 AM

Email ThisBlogThis!Share to TwitterShare to FacebookShare to Pinterest
Labels: Austria, Charles I