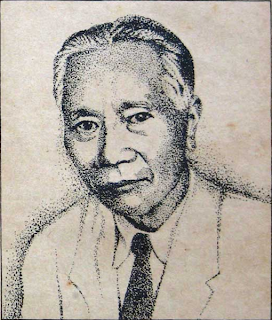 Today, Tran Trong Kim is known mostly for two things: his historical writing and for being the Prime Minister of the short-lived independent Empire of Vietnam that existed in 1945 under Japanese patronage. Kim was born in 1883 in the Ha Tinh province of Annam (as the central region was called when the French divided Vietnam). He worked in France for a time before coming home and becoming known as an educator and education administrator. He also wrote extensively on Confucianism, Buddhism and Vietnamese history. He was a major figure in the neo-Confucian movement that was trying to re-solidify traditional Asian values, including loyalty to the Emperor. Eventually he was made a chevalier of the Legion of Honor by the French.

However, when the French became alarmed at his visits and meetings with the Japanese he was forced to go into exile in Singapore under Japanese protection. Kim said the Japanese had only asked him questions about Vietnamese history and culture. However, many, many people at the time were impressed by Japan for her victories over western colonial powers and for being able to become a modern, powerful country while retaining her monarchy and traditional values. When the Japanese determined to work with Vietnamese nationalists in declaring the independence of a unified Vietnam under Emperor Bao Dai their first choice for Prime Minister was the Catholic mandarin, well known nationalist with monarchist credentials Ngo Dinh Diem. However, Diem did not accept the post and so Tran Trong Kim was called from Saigon to Hue to meet with the Emperor who asked him to form a government.

Kim did not feel qualified to be PM but nonetheless did as his Emperor wished and formed a government following the Emperor's declaration of independence and repudiation of the former treaties with France. However, Kim's government had very little time to get anything done, being in existence for only 5 and 1/2 months. They issued numerous good and well-meaning reforms to finance, education and the justice system as well as attempting to deal with the horrible famine that befallen the north but in most cases the infrastructure did not exist to make these plans a reality and it became increasingly clear that time was running out and their future would not be at all certain in the event of Japan's defeat. The press was free to vent anti-French frustration and the Emperor and government expressed their thanks to Japan for their liberation and their goal of working with the Empire of Japan in a greater Asia dominated by traditional values and traditional monarchies. The government also spoke of tearing down the walls that had kept the Emperor and his subjects apart and of creating a new style of monarchy in which the voice of the people would be represented.

However, none of it was finally to come to be. The communist-led August Revolution broke out under the leadership of Ho Chi Minh and the Tran Trong Kim government began to slowly melt away. Even when VietMinh sympathizers tore down the imperial flag to replace it with their own in front of the Forbidden City the Imperial Guards simply stood by and watched. As the situation fell apart so did the government. Kim stayed on at the request of the Emperor to oversee things during the crisis but within a few days both the PM and Emperor were out of a job. Tran Trong Kim simply went back to his academic writing and finally died in 1953.
Posted by MadMonarchist at 2:13 PM