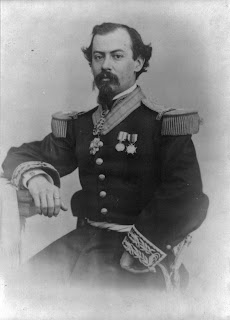 Miguel Miramon was probably the preeminent leader in the conservative, pro-Church forces before and during the restoration of the monarchy in Mexico. He was born Miguel Gregorio de la Luz Atenogenes Miramon y Tarelo on November 17, 1831. His family was of French origin and he joined the military at an early age, seeing action in the Mexican-American War at the age of 15. He was captured by U.S. troops while defending Chapultapec Castle with the corps of cadets. These young boys, los ninos, became the defining symbol of the war for the Mexicans. After the war he finished his training and entered the army in 1852 where he rose rapidly in rank, through both his considerable military talents and his winning personality. He also established himself earlier on as a leader of the conservative, pro-Church faction in Mexican politics.

He put down rebellions against the government until his foe General Juan Alvarez decided to back the Plan of Ayutla 1854. The following year Miramon was promoted to colonel, but when his old enemy Alvarez became president he joined the resistance against him, captured Alvarez and occupied the city of Puebla. He participated in the establishment of an opposition government but Puebla was retaken in 1856 and Miramon was imprisoned before escaping and defending Puebla a second time for 43 days against the forces of the liberal President Ignacio Comonfort. Before the city fell Miramon escaped and led guerilla raids with his loyal troops, taking Toluca in 1857. He was captured again, but escaped again rallied his forces in the south where he took Cuernavaea. When Zuloaga declared against Comonfort at Tacubaya in December Miramon rushed to join him and in January of 1858 Comonfort was removed from power.

Felix Maria Zuloaga became President of Mexico and promoted Miramon to the rank of brigadier general. Miramon soon became the leading conservative in the country and set about uniting the various traditional, conservative, pro-Church factions in the country. As a military leader he defeated the liberal forces in battles at Ahualuleo, Atequiza and San Joaquin. When Zuloaga was overthrown a council of notables led by General Robles Pezuela Miramon President of Mexico in 1859. At 25 years old he was the youngest president in Mexican history. However, Miramon was ever a loyalist and when he returned to Mexico City on January 21, 1859 he promptly reinstated President Zuloaga. However, Zuloaga had seen what a challenge the job could be and he turned the office back over to Miramon.

Always a fighter, one of the first things Miramon did was to challenge the liberals at Vera Cruz. Here he met defeat, but joined with General Leonardo Marquez for the victory at Tacubaya in April. The conservative cause was rapidly becoming destitute of funds thanks to the land seizures of the liberal government but Miramon fought on. Joining with General Mejia he defeated the liberal army of General Santos Degollado at Estaneia de las Vacas on November 13, 1859 and followed this up with a victory over General Rocha at Tonila on December 23. He made another attempt to take Vera Cruz in March of 1860, but although the fighting was fierce, he was again unsuccessful. In May he defeated and captured General Uruaga at Guadalajara but was defeated at Silao in August. When General Marquez was routed at the battled of Tolotlan in November, the conservative cause seemed lost. Miramon did manage to soften the blow somewhat by successes at San Bartolo and Toluca in December before his final defeat at Calpulalpam by General Gonzalez Ortega on December 22.

Like many leading conservatives, Miramon went into exile, taking a French ship to Europe. He lobbied on behalf of foreign intervention and the restoration of the empire with other Mexican monarchists in Europe. He attempted to return to Mexico when European forces occupied Vera Cruz in 1862 but was not allowed and went to Cuba. After the French set up the regency under General Juan Almonte, Miramon came back to Mexico through America in July of 1863. A definite policy had still not been agreed upon and again he was sent away until 1864 when Emperor Maximilian ascended the Mexican throne and, conscious of the fact that Miramon had been the leader of the conservative faction, gave him the rank of Grand Marshal of the Imperial Army and then dispatched him to Berlin to study military tactics.

After the French abandoned Mexico, Miramon returned in November of 1866 along with General Marquez. Miramon was sent to Mexico City where he took command of a division which he marched toward Zacatecas. He was defeated by General Escobedo at San Jacinto on February 1, 1867 and went with his remaining forces to join Emperor Maximilian, who was being besieged at Queretaro, arriving on February 19. In the ensuing battle Miramon took command of the infantry and appointed General Mejia to command the cavalry. It was a gallant defense, but after three months of siege and with the help of Colonel Miguel Lopez the republican forces infiltrated the city and forced Maximilian to surrender. Miramon had been badly wounded but still advocated fighting to the death. Nonetheless, the end had come and on June 19, 1867 Emperor Maximilian, General Mejia and General Miramon faced a firing squad on the Hill of Bells. Maximilian was in the middle, but gave Miramon his place, saying that he deserved the place of honor in their final moments. On orders from Benito Juarez, the Emperor and his loyal generals were both shot.
Posted by MadMonarchist at 1:33 AM