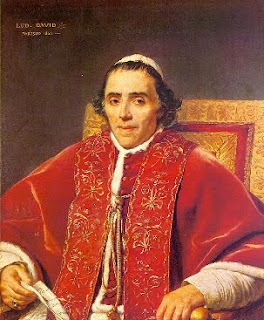 Pope Pius VII could be called one of the Church's most glorious disappointments. Considered at the time of his election to be a "compromise candidate" who would not cause trouble with the Emperor Napoleon who was wreaking havoc across Europe, Pius VII turned out to be exactly the opposite. He was a tireless defender of the freedom of the Church and a stubborn enemy of Napoleon's ambitious schemes. He came from a noble background in Cesena and was born Luigi Barnaba Chiaramonte on April 14, 1742. A Benedictine monk, he served as Bishop of Imola before being elected to the See of Peter on March 14, 1800. Although he would not prove to be the passive and neutral figure many hoped, he did make an honest effort to secure peaceful relations with France after the depths they had sunk to in the Revolution.

Pius VII, and his Secretary of State Cardinal Consalvi, negotiated concordats with France and the Roman Republic and in 1804 the Pope was invited to Paris for the coronation of Napoleon as Emperor of the French. In the interest of keeping peace, the Pope attended but he was spared having to crown Napoleon by the Emperor's own ambition as he snatched the crown from the Pope's hands and crowned himself. The show of friendship made by Pius VII was not appreciated by Napoleon however. He began to insist again on state control of the Church, huge concessions from the Church, papal support for his wars of conquest and even the removal of the papacy to France. Thwarted by Britain at sea, Napoleon tried to close off Europe from British trade, but Pope Pius VII refused to close papal ports to England. When Napoleon went back on many of his promises, even occupying the Papal States, Pius VII excommunicated Napoleon. In response, as with Pope Pius VI, Napoleon had Pius VII taken prisoner.

What followed was an excellent example of the working of the Holy Spirit through the See of Peter. Like all men, Pius VII had a breaking point and it seemed that he had reached it. He agreed with many of the humiliating demands of Napoleon to gain control of the Church, however, God's grace strengthened the Pope in this hour of trial and only two months later he repudiated the agreement, much to Napoleon's aggrevation. Pope Pius VII thus remained a prisoner throughout the rest of Napoleon's hold on power after which he was welcomed back to Rome by a grateful public that admired his bold stand and heroic suffering. It is noteworthy though that Pius VII did not hold a grudge against his French enemy and even sent a chaplain to attend to the former Emperor on his deathbed in exile. Because of his stand against the feared French Emperor, Pius VII gained the respect and admiration of Europe, even winning praise from staunchly Protestant countries who now began to see the Catholic Church as a real force for good in the world or at the very least a check on dangerous elements.

With Napoleon gone and the kings and princes of Europe being returned to their thrones, Pius VII began putting the Church back in order. The Papal States were restored to his rule by the Congress of Vienna, he restored the Society of Jesus, the Index of Forbidden Works, the Holy Office of the Inquisition and negotiated concordats with Prussia and Russia. He also reafirmed Church doctrine and teaching, denouncing Protestant Bible Societies, the Freemason cult and to ensure the re-evangelization of Europe in 1817 he founded the Congregation for the Propagation of the Faith. He also showed his compassion by offering exiled members of the Bonaparte family refuge in Rome. He died on August 20, 1823 as one of the most beloved and respected popes in recent memory after reigning for over 23 years. Napoleon had once boasted that he would destroy the Catholic Church, but thanks to the actions of Pope Pius VII and the grace of God over his Church, Catholicism and the Papacy continued to go strong long after Napoleon and his Empire were a distant memory.
Posted by MadMonarchist at 1:35 AM