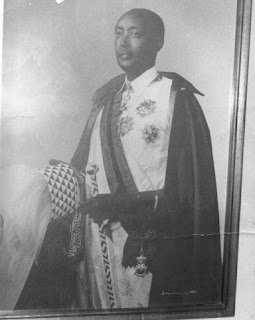 Mutara III, also known as Rudahigwa was the Mwami or King of Rwanda from 1931 to 1959. To understand his reign it is necessary to go back a bit to the First World War (from whence so many problems originated). The area that is now Rwanda had been part of the colony of German East Africa where it was left in relative seclusion, being on the far frontier of the colony. During World War I the colonial army of the Belgian Congo cooperated in an Allied offensive against German East Africa, eventually taking the prized outer capital of Tabora. After the defeat of Germany Rwanda and Burundi were given to Belgium while the rest of German East Africa went to Britain.

Mutara III was probably born sometime in 1912 though information on his origins are scarce. Mutara III was a member of the ruling Tutsi tribe known for their great height (he was himself 6ft 8in tall) and the Belgians ruled the colony through the Tutsi. The Belgians are often blamed for inventing the artificial division of the people into the categories of Tutsis and Hutus but these were mere labels to social divisions that already existed and the Germans had previously governed in the exact same fashion; through the Tutsi. Yuhi IV had been the King of Rwanda and was known for his open and friendly collaboration with the Germans. This did nothing to endear him to the Belgians who he was totally uncooperative with. Unlike the Germans the Belgians were active in missionary work and Yuhi IV was opposed to this as well, refusing to convert and scorning the Catholic missionaries. He also refused to work with the subordinate tribal chieftains which made administration vastly more difficult.

As a result of all of this, in 1931 the Belgians deposed Yuhi IV and replaced him with his son Mutara III. The new monarch was very friendly with the Belgians and favored Christianity. He set an example when he converted to Catholicism taking the name of Charles Leon Pierre and hence is sometimes referred to as Charles Rudahigwa Mutara III. He saw Belgian colonial rule as a benevolent force for the development of Rwanda and gave thanks, in his words, to, “Christ the King to have given Rwanda the divine light of Belgian colonial administration along with its science of good government”. His reign was a period of peace between the colonial regime and the native population as missionary work increased and coffee was brought in to cultivate as a cash crop. He consecrated Rwanda to Christ the King, ended feudalism, corporal punishment and forced labor in the country and was widely popular with his people, the criticism not coming until after his death as is often the case.

In 1946 the League of Nations mandate dissolved and Rwanda became a UN Trust Territory and the Belgians were charged with preparing the area for eventual independence. Education was expanded, the economy diversified and there were many other benefits that are often overlooked in an era too often glossed over with a black brush. The reign of King Mutara III came to an end with his death on July 25, 1959 after being vaccinated by a Belgian doctor in Bujumbura after attending a meeting with Belgian officials. Many in Rwanda have since claimed that he was assassinated, however, this flies in the face of the criticism, often from the very same corners, that Mutara III was too friendly and subservient toward the Belgians. They criticize the king for being cooperative with the Belgians yet also claim that they had him killed without bothering to answer what motivation the Belgians could possibly have for doing such a thing. He was succeeded by his younger brother Kigeli V who was and remains very proud about his opposition to the Belgians so one would be hard pressed to describe how the death of Mutara III was good for the colonial regime. After the loss of Mutara III his wife, Queen dowager Rosalie Gicanda, remained in Rwanda and on April 22, 1994 was killed in the Rwandan Genocide.
Posted by MadMonarchist at 12:46 AM