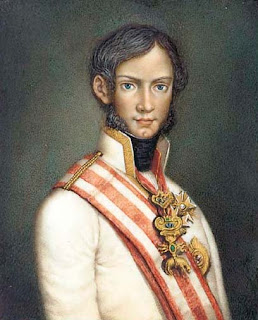 Effectively, though not officially, Leopold II was the last Grand Duke of Tuscany. He was born in Florence on October 3, 1787 to Grand Duke Ferdinand III and Princess Luisa Maria Amelia Teresa of Bourbon-Two Sicilies. He had a normal childhood and in 1817 married Princess Maria Anna of Saxony by whom he had 3 daughters. He succeeded his father as Grand Duke on June 18, 1824. Always popular amongst his people, Italy was in the throws of revolutionary, nationalist agitation yet even the liberals had to regard Leopold II as the most benign of the monarchs of the Italian princely states. He was very hard working and allowed a measure of freedom of speech, freedom of the press and allowed political exiles to return. Nonetheless, he could not keep revolutionary fervor out of Tuscany altogether.

Tragedy struck in 1832 when Grand Duchess Luisa died and the following year the Grand Duke married Princess Maria Antoinetta of the Two-Sicilies by whom he had a further 10 children. Leopold II showed himself willing to work with the liberal elements in enacting constitutional government after the kingdoms of Piedmont and the Two-Sicilies did the same. He showed himself to be an Italian nationalist by supporting the war by Piedmont against Austria in Lombardy but despite the Tuscan troops fighting well the overall campaign was a failure. Riots broke out and the Grand Duke had to call in moderate liberals to form a government in the hopes of keeping the revolutionary republicans at bay. The situation seemed to be falling out of control with the republicans gaining strength, the Austrians victorious and even the Pope being forced out of Rome by revolutionary mobs. Leopold II finally left Florence in 1849 saying that after hearing from the Pope he could not agree to the demand for a constituent assembly.

Anarchy prevailed in Florence and a republic was declared. A dictatorship was set up but even this could not keep order following the defeat of King Carlo Alberto of Piedmont by the Austrians. The public, which largely never stopped holding Leopold II in high regard, called on their Grand Duke to return to establish a liberal, constitutional monarchy and prevent a foreign invasion. However, Leopold II had already made agreements with the Austrians who were marching on Tuscany. On May 25 the Austrians entered Florence. Three days later Leopold II returned with a new outlook on life. To put it bluntly, there would be no more ‘mister nice guy’.

In April the following year he agreed to the indefinite occupation of Tuscany by 10,000 Austrians and that fall he dissolved parliament and signed a new, very pro-Church concordat. When he asked the Austrians if the constitution might be maintained the Austrian prime minister grimly advised him to ask the opinion of the Pope, the King of Naples and the dukes of Parma and Modena; all of whom had been deposed after giving to calls for constitutional rule. In 1852 the constitution was formally revoked and a crackdown ensued on all liberal, revolutionary elements. Some continued to cling to a constitutional monarchy under an Italian nationalist grand duke while others insisted that Leopold II had to go and be replaced by republican rule.

Things began to come to a head again in 1859 when France and Piedmont-Sardinia went to war against Austria. Leopold II was powerless to prevent a considerable number of Tuscans from volunteering to join the fight against Austria. A political coalition finally demanded the Grand Duke to enter the war against Austria yet again. Leopold II first felt he had no option but to go along but then came new demands for his abdication in favor of his son, an alliance with Piedmont-Sardinia and promises of some vague notion of cooperation with a new organization of Italy. Leopold II rejected the demands on by late April the Italian tricolor was appearing all over Florence. The soldiers kept order but Leopold could see where things were going and left with his family for Bologna. With no bloodshed a provisional government was set up which quickly called for union with the rest of Italy. Leopold II abdicated in favor of his son on July 21 who then became Grand Duke Ferdinand IV of Tuscany but he never reigned or ruled at all, his sole official act being to issue a formal protest from Dresden in 1860. Leopold II spent the rest of his life in Austria and died in Rome on January 29, 1870.
Posted by MadMonarchist at 12:38 AM