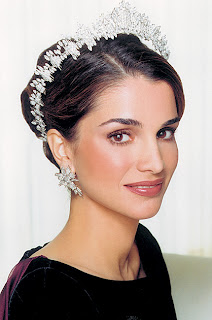 is an example of royalty at their best doing their primary 'unofficial' job: supporting worthy causes by their own status and notoriety. HM Queen Rania of Jordan has put her support behind the new campaign called 1GOAL: Education for All, joining with the leadership of FIFA, the world soccer (football to all but the US) authority to strive for educational opportunities for all children. The campaign will be working hand in hand with the World Cup next year in South Africa. Their states goal is to ensure that the 75 million African children not currently in school will be given the chance to have an education, providing teachers and classrooms in the poorest areas; hopefully breaking them out of the circle of poverty.

This is a truly noble goal, one that I would think all people could get behind, and best of all it is not some coerced, government mandated social program; rather a humanitarian effort of one group of people striving to help another. Queen Rania put it rather well saying, "I’m proud to support 1GOAL; it isn’t asking for money, it’s asking for your name, your commitment to fair play for future generations,". Speaking of the importance of education to society as a whole the Queen added, "When children are denied an education, society as a whole loses out. It’s the best investment you can make to help people lift themselves out of poverty, the one investment you can make that will never shrink in value." Queen Rania has done great work along the lines throughout her entire royal "career" and this is a prime example of the sort of work many, many royals do quite regularly but don't often get as much attention for compared to the occasional minor embarassment.
Posted by MadMonarchist at 2:48 AM