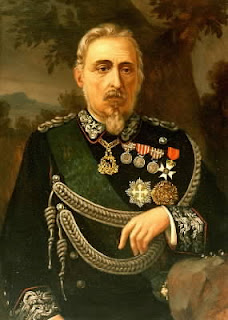 General Giovanni Durando was one of the most prominent and controversial figures in the first war of Italian unification. During his career he has been called a patriot by some and a traitor to others. He was born in Mondovi on June 23, 1804 Giacomo Durando, a future leading Italian nationalist, and Blessed Marcantonio Durando were his brothers. Early on he set his sights on a military career and eventually gained a place in the Royal Guard of King Victor Emmanuel I of Piedmont-Sardinia in 1822. In a short span of time he became very caught up in the liberal movement that was sweeping Europe, first as a revolutionary and later as a committed monarchist of the moderate-liberal variety. With his brother he was forced to flee his homeland for a time for implication in a plot to force the very conservative King Charles Felix to accept a constitution and during his exile he gained ever more extensive military experience. He was a firm believer in liberal monarchy and saw it as the only way to preserve basic liberties without the chaos that would come with a revolutionary republic. 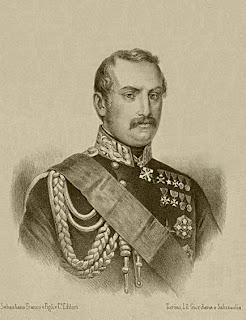 Between 1822 and 1842 Giovanni Durando served as a lieutenant in the Belgian Foreign Legion as a lieutenant, then as a captain in the Portuguese army fighting for Don Pedro and finally he moved to Spain where he rose to the rank of general fighting for the liberal monarchy there against the Carlists. Piedmont was never far from his thoughts though and he was happy to be repatriated home in 1842. Like most liberals he welcomed the election of Pope Pius IX who had been known for his liberal sympathies and his embrace of the idea of an Italian nationality. Indeed, for a time the unofficial anthem of the Italian nationalists was a hymn of praise to Pope Pius IX. For a time it was a widely held belief that for the long sought after goal of Italian unification to be achieved it would require the cooperation and partnership of the two dominant cities on the peninsula; Turin and Rome. While Piedmont-Sardinia worked to consolidate control over northern Italy, Giovanni Durando was among the Piedmontese party in Rome urging the Pope to embrace the cause of Italian unity under the moderating leadership of the House of Savoy.

For a time this seemed a real possibility as the Pope reprimanded an overzealous Austrian commander for an incursion on Papal territory and organized forces to show them the temporal power of the Papacy would not be violated by anyone. The Austrians backed down and it seemed that the Pope was on the side of the nationalists who went to war with Austria in 1848 when the outbreak of revolution in Vienna seemed to offer a golden opportunity. Pope Pius IX excited many more liberal hearts when he ordered Papal forces to march to the frontier of Romagna when hostilities broke out to ensure that the Austrians did not violate his territory. He chose two men to command that gave the liberals even more encouragement; General Giovanni Durando to command the majority (a Piedmontese monarchist known to favor unification) and Colonel Andrea Ferrari to command the Roman volunteers who was a liberal republican. Most took this as a sign that the Pope might have been, if anything, even more to the left than Durando.

However, this expedition led to a great controversy when General Durando actually engaged the Austrian army in cooperation with the forces of Piedmont-Sardinia (whose army also included many deserters from the Papal service). The Pope angrily denounced the affair saying that he had never ordered his army to cross the Po and fight the Austrians; he had only intended them to stand watch and rebuff any incursion of Papal territory. Neither the Pope nor his general emerged well from the affair. General Durando was defeated by the Austrians and his actions were later blamed for allowing the Austrians to concentrate their forces to overwhelm the main Piedmontese army under King Charles Albert. The Pope, likewise, came off looking either foolish or duplicitous for sending an army to a battlefront under the command of men ardently in favor of fighting the Austrians only to order them not to do so. Some in the army even believed the order was meant to be ignored and had been issued only to provide cover for the Pope if his troops were defeated by the Austrians. Obviously the Pope would never have acted so dishonestly, however his image was still sullied by those who believed him. Given his attitude it seemed incredible to have appointed a Piedmontese general known for his nationalist sympathies and support for Italian unity to organize, train and then command the Papal Army.


General Durando quit the Papal service when the Pope publicly condemned the war against Austria, which also saw a major shift in public opinion away from the Pope as many Italians took this as the Pope taking the side of Austria against his own people. Holding the rank of lieutenant general in the royal army of Piedmont-Sardinia, Durando continued to serve in the war against Austria, winning great fame for his defense of Vincenzo, and suppressed rebellions against royal authority in Sardinia where republican revolutionaries wished to seize leadership of the nationalist movement away from the royal court in Turin or simply to break away on their own. In 1855 he was sent with the Italian expedition to the Crimean War where the forces of King Victor Emmanuel II earned high praise at the battle of Chernaya and the siege of Sevastopol. In the Third Italian War of Independence General Durando was wounded at the disastrous battle of Custoza in 1866 where he commanded the I Corps. In 1860 he was appointed to the rank of Senator and after the formal proclamation of the Kingdom of Italy the following year was sent to command royal forces in the former Kingdom of the Two-Sicilies to wipe out the widespread banditry that had taken hold in the absence of a stable government. Serving his king to the last, he died in Florence on May 27, 1869.
Posted by MadMonarchist at 12:45 AM