War of 1812 Wednesday, Part I, Causes and Background of the War 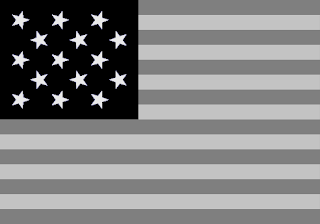 Probably no other war the United States has ever fought is less remembered or more unusual than the War of 1812. There are a number of possibilities for this. It may be due to the fact that some people simply lumped the conflict together with the American Revolution; a rather unimportant aftershock. It may be because nothing of great significance was achieved because of the war. However, it is more likely that this lapse of memory is due to the fact that the United States, so proud of her illustrious military record, failed to achieve any of her objectives in the war and indeed was fortunate to have escaped with her territory intact. In spite of this, some have claimed the War of 1812 to be an American victory, while the majority of others view it as a stalemate. The British and Canadian perspective, needless to say, is quite different and in this case considerably more accurate.

To understand the causes of the War of 1812, which was a conflict many in the United States did not want, it is essential to know a little bit of the global politics of the day. During the late 18th and early 19th centuries, following the French Revolution, Napoleon Bonaparte had made France the ruler of continental Europe. The French were able to defeat Spain, Prussia, Austria, Russia and other powers with Great Britain alone holding out because her naval mastery kept Napoleon from invading the British Isles. As a result, both sides declared blockades against each other to bring economic pressure to bear against their enemy. This effected the United States which, as a neutral power, had been making money hand over fist selling supplies to both sides. The United States protested these blockades, but against the naval might of Great Britain, could do very little about it, nor were all Americans sympathetic to the French regime of Napoleon. 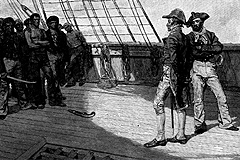 The ongoing naval battle between France and Britain also effected America with the issue of impressments. The Royal Navy was stretched to the limit fighting Napoleon and blockading Europe, so every able-bodied sailor was needed. However, life was hard in the British fleet and hundreds of sailors deserted over time. Knowing nothing but the sea, many of these deserters found work on American merchant ships. When these vessels were stopped by the British blockading ships, British deserters were removed and impressed back into the Royal Navy. The United States disapproved of this and claimed that many of the men being impressed by British ships were not British deserters but American citizens. Britain, engaged in a life or death struggle against a dictator who had taken over half of Europe, felt little sympathy for any American who was taken by mistake into naval service. The issue did finally come to blows however in 1807 when the USS Chesapeake was stopped by the British frigate HMS Leopard only to have the American commander, Captain James Barron, refused to allow the British search his ship for deserters. In response, the Leopard fired on the Chesapeake, the British boarded the ship by force, removed four Royal Navy deserters and had one of them hanged.

The British later apologized for the incident, but the overall situation continued. The United States tried to retaliate by passing the Embargo Act which stopped all foreign trade, and as a result almost ruined the entire economy of the New England states which depended on commerce for their livelihoods. It also hurt southern states which could not sell cotton or tobacco to Britain, virtually shutting off their only income. After 15 months this nonsense was stopped, but none of the other actions taken had any effect either. Moreover, when the United States promised to restore free trade with any nation that lifted her restrictions, Napoleon pretended to do so hoping to incite America to join his war against the British. He would soon get his wish and actions such as this only made Britain view America as not only less than neutral but supportive of the dictator Napoleon and his conquest of Europe. 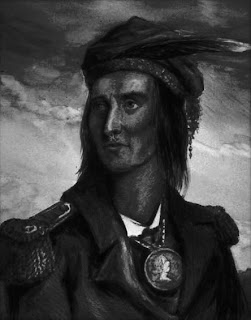 There was also, it must not be forgotten, still lingering rivalry from the American Revolution. Much of this focused on the American Indians and their treatment by both sides. Many Indians had sided with Britain during the Revolution since the American colonists were eager to expand westward and seize the land Britain had granted the Indians only a short time before. During the frontier conflicts after the Revolution Britain continued to support the Indians in the Northwest Territory as they resisted the incursions of United States settlers. General William Henry Harrison had defeated an Indian confederacy led by the Shawnee Chief Tecumseh in 1811, but the Indians were not pacified and continued to look to British forces in Canada for support. Chief Tecumseh would prove to be a vital commander in the upcoming conflict.

That same year, negotiations with Britain continued to go nowhere and the aggressiveness of the United States was growing, fueled by a desire for expansion and conquest. President James Madison forbid all trade with Britain and asked the Congress to prepare for war with the British Empire. The country, however, was not united on the subject of war. The so-called "War Hawks" were mostly from the southern and western states under such men as Henry Clay of Kentucky and John C. Calhoun of South Carolina. They were eager most of all for the conquest of Canada. During the American Revolution Canada had been invaded but British and Indian troops under Sir Guy Carleton had defeated the attempt and many in the US were anxious for revenge. National arrogance played a great part in this. Many Americans were so convinced of the superiority of their country and government that they believed the Canadians would welcome their invasion with open arms. One politician, commenting on the weak defenses to the north remarked that the Kentucky militia alone would be enough to conquer Canada. Indeed, with Britain locked in combat with Napoleon, Canada seemed like a huge, undefended prize simply waiting to be taken.

This view was not universal though. Many New England states were totally opposed to a war with Britain. Conquering Canada mattered little to them in comparison to how their economy would be ruined by cutting off all trade with the British Empire. The problems so far had already taken a heavy toll on their businesses and many were not prepared to tolerate conditions becoming any worse. Many people in the US also sympathized with Great Britain carrying on the fight against Napoleon and were not happy with the prospect of effectively entering a world war on the side of a French dictator bent on conquest. The divisions became so heated that the same month war was declared riots broke out in Baltimore against the anti-war Federalists which raged for four months. The War of 1812 was probably the most unpopular war the United States ever fought up until the Vietnam conflict. Yet, as many as there were who opposed the war, there were many more who favored aggressive action against Britain. These people believed in the "Manifest Destiny" of the United States to rule all of North America and war with Britain seemed the perfect way to finally wipe out the British-backed Indians hindering US occupation of the Northwest Territory, grabbing the vast expanses of Canada as well as perhaps taking Florida from Britain's Spanish ally. 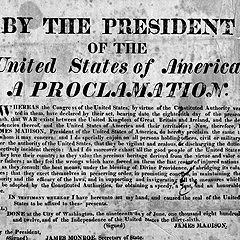 Ultimately, it was the expansionists who won out, along with those who were simply eager to throw the weight of America around and demand some concessions from Great Britain to recognize their claim to be a legitimate world power and not simply some upstart rebel colonies which would soon fall apart. At the request of President Madison, on June 18, 1812 the United States Congress formally declared war on Great Britain. America, especially the War Hawks, were jubilant and optimistic, though in hindsight there was certainly no reason to be. The United States army was miniscule and scattered across the frontier in remote garrisons. There was hardly a navy to speak of and there was still no institution for the training of military officers. Britain, on the contrary, had the best navy in the world, a veteran army which had experience fighting the largest battles yet seen in the western world and more than holding their own. The Americans however, disdaining regular army troops and drawing an idealistic but flawed conclusion from the Revolution were confident that their civilian militia would be more than enough to gain control of North America while the best British troops were still tied down fighting the French in Europe.