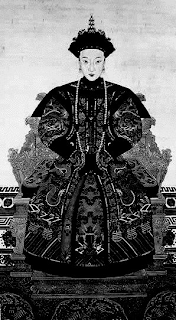 It seems that in Imperial China, many of the consorts we most remember are those who met a tragic or mysterious end. This was certainly the case with Empress Xiaozheyi (Xiao Che), consort of the Emperor Tongzhi, who remains the subject of one of the great unsolved mysteries of the Great Qing Dynasty. She was born on July 25, 1854 into the Alute clan of the Mongol Plain Blue Banner. Because of her background many works refer to her as Empress Alute. Her father, Chong Ji, was a highly respected mandarin, a professor at the Hanlin Academy and the Secretary of the Bureau of Revenue, probably the most esteemed and accomplished Mongol scholar of his time. Her mother was the daughter of a high-ranking Manchu prince, so she was well placed in the upper echelons of Qing society from the very beginning. Alute was noted for her exceptional intelligence, which is not surprising given the scholarly achievements of her father and he kept his daughter close to him when he was at court, personally seeing to her education. Because of this she had a far more developed intellect than was normally expected for a princess but her proximity to the halls of power also caused her to be noticed by the Empress Dowager Cixi as well as her son Emperor Tongzhi who was immediately taken with her.

Tongzhi had reigned as the “Son of Heaven” since he was five years old, coming to the Dragon Throne in 1861 but it was his mother who was the real power. When the time came for a bride to be chosen for the Emperor it was Tongzhi himself who insisted on the knock-out book-worm Alute as an ideal bride for himself and certainly few would have disputed the wisdom of such a choice. Alute was equally famous for her great intelligence, her great virtue and character as well as her great beauty. One would have been hard pressed to imagine someone better suited to be an empress. Empress Dowager Cixi, on the other hand, was not so impressed but, nonetheless, on September 15, 1872 Alute formally became Empress consort to Emperor Tongzhi while the other candidates, favored by the Empress Dowager, were given the consolation prize of becoming concubines. However, their lives were to be rather boring as Emperor Tongzhi favored Alute more than any other and spent almost every night with her, hardly, if ever, calling for any of his other concubines. Even as a youth, Tongzhi had a reputation for, shall we say, a great deal of diverse romantic experience, but all that seemed to change with his marriage to Alute and while his mother might have been pleased with that, she was not at all pleased that he was spending all his time with his wife to the neglect of the consorts she favored and he was soon taking some interest in actually ruling China. She didn’t like that either and was inclined to put the blame on his new wife.

The Empress Dowager took Empress Alute aside and explained to her that she should not keep her husband all to herself, that whether she recognized it or not she was causing harm but making Tongzhi neglect his other consorts. Alute, of course, was intentionally doing nothing of the sort. She came when the Emperor called and could hardly be held to blame for him not calling others. Appealing to her famous intellect, the Empress Dowager also suggested that Alute and the Emperor devote more of their time to study rather than romance and, of course, to do so separately so that the lovely girl would not distract her lustful husband. Tongzhi, however, wanted nothing to do with anything that kept him apart from Alute for long and she was just as devoted to him, no matter how odd a couple they seemed, the playboy and the nerdy girl, so finally the Empress-Dowager acted on her own considerable authority to have the two kept apart. This was unfortunate as the Emperor, deprived of the companionship of his wife, soon returned to his former licentious ways with the help of his eunuchs who were eager to indulge his every whim. Soon he was being smuggled out of the palace to the various dens of iniquity around Peking where, by most accounts, his lifestyle led him to contract syphilis.

Emperor Tongzhi became increasingly bad tempered as well as increasingly ill because of this state of affairs and Empress Alute became more and more depressed, however, she had enough intellect and sufficient will to hold out hope. When she was allowed to tend to her husband her thoughts were always on his recovery and what changes they would make when that time came. Eunuchs reported to the Empress Dowager that Alute often complained about her dominance of the government and interference in her life and that of her husband. Needless to say, the Empress Dowager did not take kindly to this and began to view her daughter-in-law not only as a hindrance to her but as an actual threat and perhaps her son as well, though that was of course blamed on the influence of his over-intelligent wife. Reportedly, the Empress Dowager listened in on one such conversation and then burst into the room in a rage, attacked Alute and ordered her to stay away from the Emperor, having her eunuchs take the Empress away and keep her more or less under guard.

Empress Alute was despondent and her despair increased when Emperor Tongzhi died on January 12, 1875. The Empress was reportedly pregnant at the time but as the Emperor had no children it was up to the Empress Dowager to decide the succession and she chose her nephew who became the tragic Emperor GuangXu. Empress Alute was refused the title of Dowager Empress or any of the other traditional privileges of the widow of an Emperor of China. She was kept virtually in a state of arrest and her food allowance was drastically cut, weakening her considerably. Here is where the real mystery begins. The generally accepted story is that she wrote to her father asking for help and that he replied telling her, in so many words, that suicide was the only honorable way out. Not long after, on March 27, Alute was dead, the official verdict from the imperial court being that she succumbed to an illness.

Immediately though many believed she had killed herself in despair over her situation and on the advise of her father. However, there are some problems with this story which cause many to doubt it. For one thing, it would have been no small trick for her to get a message out of the Forbidden City to her father without the knowledge of the Empress-Dowager, to say nothing of him being able to freely reply back. If this did happen, was his response authentic? Given how he had always been so close to his daughter it seems at least slightly questionable that he would advise her to take her own life. Likewise, the sudden onset of so terrible an illness has caused some to believe that she had been poisoned, probably on orders from the Empress Dowager who was certainly not above such tactics. The angry reaction of the Empress Dowager to any kind words about Alute would seem to support this theory. Additionally, even if it was simply a death from natural causes, the fact that her food allowance had been cut so dramatically would have weakened her health and made her more susceptible to illness, so the Empress Dowager would still not be totally free from blame in that case. So, what was it? Did she die of natural causes as the court claimed, did she commit suicide or was she poisoned by a spiteful mother-in-law. We may never know for sure and so the true fate of the tragic Empress Alute will likely remain one more of the many secrets held within the massive walls of the Great Within.
Posted by MadMonarchist at 5:14 AM