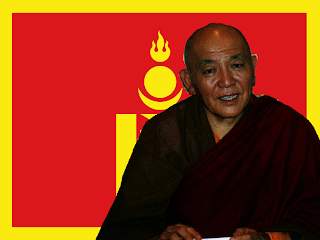 It was just brought to my attention that on Thursday, March 1, His Eminence the Ninth Khalkha Jetsun Dhampa Dorjee Chang Jampel Namdrol Choekyi Gyaltsen, spiritual head of the Janang tradition of Tibetan Buddhism and the spiritual Buddhist head of Mongolia, spiritual successor of the last Holy Khan of the Mongols, passed away at the age of 80 at 5.58am (IST) in Ulaanbaatar, Mongolia. A special prayer service was held by HH the XIV Dalai Lama in his memory. You can read his obituary here. Although his passing is a sad occasion, it is perhaps fortunate that it came at such a time when the Dalai Lama will be able to preside over the search for his reincarnation. Had this sad event happened later, I could imagine a great deal of division and discord over the selection of his successor. 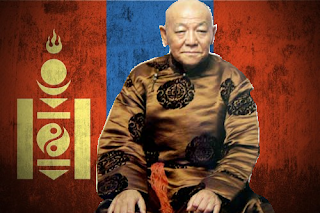 Readers interested in learning more about this remarkable man and his situation can look back at posts on How the Revolution Came to Mongolia and The IX Bogd Gegeen and Monarchism in Mongolia. It is unfortunate that a full restoration was not possible in his lifetime, though some progress was made with some political and military officials favoring at least some sort of official, ceremonial role for the "Holy Shining One". Although little remembered, Mongolia suffered horribly at the hands of the communists (it was the first Soviet satellite state) and a cultural, spiritual, national and political revival is badly needed in that still suffering country which was once the center of the largest empire in history. We remember the man who should have been Bogd Khan and renew ourselves in the effort to see his successor recognized as such.
-MM