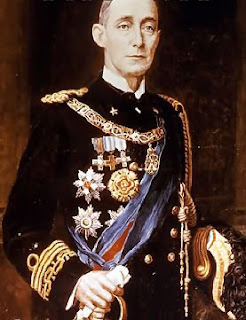 Prince Luigi Amedeo, Duke of the Abruzzi is one of those royal figures who seems out of time, as if he would fit in better in a more adventurous, colorful period of distant history than the era he was actually born into. He was born Luigi Amedeo Giuseppe Maria Ferdinando Francesco di Savoia-Aosta, at the time a prince of Spain, on January 29, 1873 in Madrid to HM King Amedeo I of Spain (previously and subsequently Duke of Aosta) and his queen Maria Vittoria dal Pozzo, the last of three sons born to the couple. His grandfather was King Vittorio Emanuele II of Italy. Not long after his birth he much put-upon father declared Spain ungovernable and abdicated, happily returning to Italy where the prince became known as the Duke of the Abruzzi. Even in his youth he was a world traveler and it is tempting to think that his visits to places as far flung as Eritrea in east Africa and Vancouver, Canada might have put him on the path he would follow for the rest of his life, conquering mountain peaks, hostile seas, arctic ice fields and burning deserts. 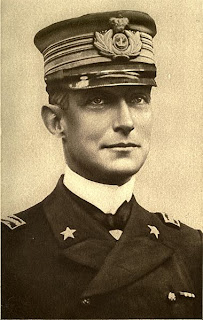 Exploring the most remote and rugged corners of the earth became his passion and in 1882 he began training as a mountain climber on Mont Blanc and Monte Rosa in the Italian Alps. In 1897 he set off on an epic adventure to the mountainous U.S.-Canadian border to climb Mt St Elias in search of a native legend known as the Silent City of Alaska which was said to appear over a mountaintop glacier. Prince Luigi and his party conquered the mountain and did indeed see the “city” which was actually a mirage but, by all accounts, one that had to be seen to be believed such was the magnificence of the sight of it. The trek had paid off, the accounts each member gave to the papers afterward were more fantastic than the one before. However, the Duke of the Abruzzi was only getting started. In 1899 he organized an expedition to reach the North Pole. As with most of his expeditions, the story reads like something out of an adventure novel.

First the Prince and his party traveled to Oslo, Norway (then called Christiania -this was when Norway was united with Sweden) where he bought a whaling ship which he named the ‘Polar Star’. The Duke was an accomplished sailor as well and they braved the icy seas to reach Archangel in northern Russia. Donning their best finery they were welcomed by the local Tsarist governor, civil officials and a colorful collection of foreign representatives present at the frosty port of call. Special celebrations were held in honor of the royal visitor and the international gathering in the Russian port were treated to a special performance of a play set in the Middle East followed by the orchestra striking up the Italian royal anthem in honor of their guest. Before departing the Catholic Italians were invited to attend an Orthodox Divine Liturgy and finally they set sail for Franz Joseph Land where they planned to wait out the worst of winter before going by dog sled to the North Pole. Unfortunately, the Prince lost two fingers to frost-bite during the grueling winter which made him unable to handle a dog sled, forcing him to leave the last leg of the expedition in the hands of his subordinate Captain Umberto Cagni. 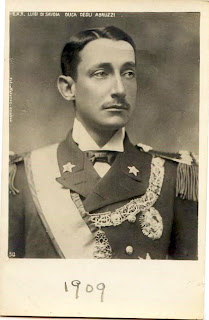 Although denied his prize of reaching the pole himself, Prince Luigi was still eager to boldly go where no man, or at least very few men, had gone before. With visions of Henry Morton Stanley dancing in his head, in 1906 he set out on a trek across the remote African wilderness of what is now Uganda to explore the Ruwenzori Mountain Range. In doing so he reached the top of some sixteen mountains one of which was named Mount Luigi di Savoia in his honor. Buoyed by his African adventure, only two years later in 1909 he gathered another expedition and set off to climb K2, aka “Savage Mountain” the second-highest peak on earth in the Karakoram Range on the Pakistan-Chinese border. They were ultimately unable to reach the very top, attaining a top elevation of 6,666 meters with their route known forever after as the Abruzzi Spur. In 1910 Prince Luigi and his team took on Chogolisa (Bride Peak) in the same overall mountain range, some of the most rugged and dangerous terrain on earth. Again, they did not reach the summit but set a new world record for the elevation they did reach. He was celebrated across the world, nowhere more than in Italy of course, and was a celebrity to intrepid explorers everywhere.

Prince Luigi had also trained with the Royal Italian Navy and by 1911 held the rank of vice-admiral and from 1911 to 1912 was given the post of Inspector of Torpedo Craft. This was more significant than it probably seemed at the time as free-swimming torpedoes were a recent innovation and would not actually sink a ship until a German u-boat did the job for the first time in 1914. However, this was an area that the Italians would later excel at and would achieve some stunning successes against the formidable British Royal Navy using tactics that began with those first torpedo craft developed under the Duke of the Abruzzi. When World War I broke out in 1914, Italy joining the fight a year later, the Duke was given command of the Italian Adriatic Fleet at Taranto with the formidable battleship Conte di Cavour as his flagship. As in the North Sea though, there was little combat between the main battle fleets of Italy and Austria-Hungary, each being content to keep the other side as inactive as possible while small-scale raids probed for weakness. However, Prince Luigi and his ships performed one of the great missions of the war when the rescued the long-suffering Serbian army which, in a combined German-Austrian-Bulgarian offensive, had been driven from their homeland. Were it not for the timely arrival of the Duke and his Italian fleet the Serbs would have been wiped out completely. Their rescue enabled them to rejoin the fight at the new Allied front in Greece and ultimately go on to see Serbia liberated from Austrian occupation. 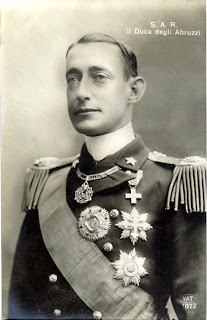 After the war, with all of his accomplishments, Prince Luigi was one of the most popular members of the Italian Royal Family. Even the previously zealous republican Benito Mussolini was quick to avail himself of the Duke’s experience in Africa when it came to negotiating a new friendship treaty with Ethiopia in 1928. Prince Luigi journeyed to the Ethiopian capital of Addis Ababa to present gifts of friendship to Haile Selassie, including a Fiat 3000 tank which he later used in thwarting a coup led by forces loyal to the reigning Empress Zewditu. One can imagine that Mussolini probably later regretted such generosity. In 1932 Prince Luigi tried his hand at running the new Italian shipping line which had formed from a merger of all the previous transatlantic lines. However, it did not work out will as the Prince had nothing of the businessman about him and found dealing with company executives impossibly frustrating. Instead, he moved to the Italian colony of Somalia where he established his own model plantation. The African wilderness was far more to his liking than a desk in an office building.

The Duke of the Abruzzi had led a life most men would only dream about. The only thing lacking was a romantic interest he could carry off into the African sunset. There had been an earlier romance with an American woman named “Kitty” Elkins, the daughter of a wealthy West Virginia Senator. She was likely the one great love of his life but his cousin King Vittorio Emanuele III was adamant that no prince of the House of Savoy could marry a commoner. Prince Luigi was frustrated by this but, since the relationship could go nowhere, his brother, Prince Emanuele Filiberto Duke of Aosta (a hero of the Great War) convinced him to give the girl up and move on. This he did, only finally marrying a Somali woman named Faduma Ali toward the end of his life when he was no longer concerned with the consequences. He died in Jowhar, Somalia on March 18, 1933 at the age of 60 and, as per his wishes, was buried near a local river. Missing no opportunity to put himself forward, Benito Mussolini presided at his funeral, hailing the Duke of the Abruzzi as the last in a long line of great Italian explorers history would never forget.

This may have been an exaggeration, but if so, it was only a slight one. Prince Luigi-Amedeo simply had the misfortune to be born into a time when there were not many untouched corners of the world left for mankind to conquer. Had he been born earlier it is certainly easy to imagine him being counted among the great Italian explorers of history such as Marco Polo, Giovanni Caboto, Amerigo Vespucci or Christopher Columbus. It was simply his nature to strive for the seemingly unobtainable, to go to the places most difficult to reach and to prove that he was equal to any challenge the land or the sea could throw at him. Hopefully, in the end, he finally found what he was looking for in all his travels to the farthest reaches of the earth.
Posted by MadMonarchist at 12:45 AM