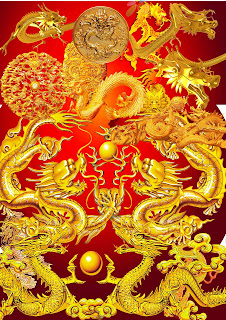 A Happy Year of the Dragon to all the loyal peoples of Eternal Asia. This year, particularly, the monarchial origins of the Lunar New Year are worth remembering. The dragon, as most know, was the symbol of good fortune and authority. As such it was always the primary symbol of the Emperor. In old Viet-Nam the Tet festival saw the dynastic flag and symbol displayed on every significant monument; the Imperial Palace, the Holy Citadel, the offices of the ministries, the fortresses and so on. In all the pagodas and imperial temples special offerings were set out in memory of the past emperors and imperial ancestors. At the Forbidden City in Hue the members of the Imperial Family, the mandarins and high-ranking dignitaries gathered to kowtow before the Emperor on the Golden Dragon Throne in the Palace of Ultimate Peace, wishing him "happiness, prosperity and longevity". Outside, gun salutes were fired, bugles were played and traditional musicians played for the occasion.

Across the country, special offerings were made for the family ancestors who were believed to rejoin their families at this time and children would come to kowtow before their parents in a show of filial piety and would be given a special coin wrapped in silk to symbolize a wish for their longevity from their elders. A great deal of noise would be heard as people symbolically drove away the previous year, and any misfortune attached to it, to welcome and make room for the happiness of the new year. The legendary Jade Emperor would appoint a new spirit for the year which the people would revere with special ceremonies and in appreciation the spirit was supposed to grant good fortune to the people and spare them from undue suffering. A special bamboo 'trap' was put outside the doors of homes to catch evil spirits while a basket was set out to collect offerings for the good and beneficial spirits. Special plants, pictures and other decorations would adorn every house to show the wishes of the inhabitants and evil spirits would be banished with noisy firecrackers. There was also a holiday from housework so as to avoid sweeping out lucky spirits along with the dust. Today children traditionally get red envelopes of money from their elders. 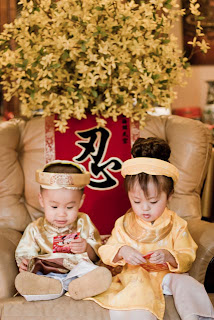 The Emperor, the Son of Heaven, played a pivotal role in the Tet celebrations. With all due ceremony the imperial seal would be covered and hidden. This was to symbolize that time had stopped for the holiday so everyone could forget their worries and celebrate. The Emperor would stand over the Noon Gate and officially announce the opening of the Tet holiday in what could be compared to the New Year's addresses of western monarchs still today. In the west, New Year is not usually considered a "family" holiday like Christmas or Thanksgiving (in the U.S.) but in the Far East the Lunar New Year is very, very much a family holiday and a family-focused holiday when children are treated, parents are revered and people honor their ancestors as a way to keep their memories alive throughout time. And, of course, given that, the Emperor, as head of the Imperial Family and the national family presided over the Tet celebrations as a whole on behalf of his people. In these days when few traditional monarchies remain this may not be much remembered but it is no less true.

Again, a happy Year of the Dragon to all.
-MM 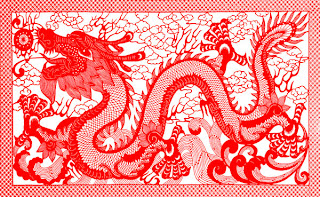 Posted by MadMonarchist at 10:12 AM